Jeremy O'Brien (born 1975, Australia [1] ) is a physicist who researches in quantum optics, optical quantum metrology and quantum information science. [2] As of 2010 [update] , he is Professorial Research Fellow in Physics and Electrical Engineering at the University of Bristol, and director of its Centre for Quantum Photonics. [3] 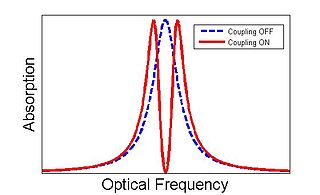 Electromagnetically induced transparency (EIT) is a coherent optical nonlinearity which renders a medium transparent within a narrow spectral range around an absorption line. Extreme dispersion is also created within this transparency "window" which leads to "slow light", described below. It is in essence a quantum interference effect that permits the propagation of light through an otherwise opaque atomic medium.

John G. Rarity is professor of optical communication systems in the department of electrical and electronic engineering at the University of Bristol, a post he has held since 1 January 2003. He is an international expert on quantum optics, quantum cryptography and quantum communication using single photons and entanglement. Rarity is a member of the Quantum Computation and Information group and quantum photonics at the University of Bristol.

The field of quantum sensing deals with the design and engineering of quantum sources and quantum measurements that are able to beat the performance of any classical strategy in a number of technological applications. This can be done with photonic systems or solid state systems.

Yoshihisa Yamamoto is an applied physicist and the director of Physics & Informatics Laboratories, NTT Research, Inc. He is also Professor (Emeritus) at Stanford University and National Institute of Informatics (Tokyo).

H. Jeff Kimble, is the William L. Valentine Professor and Professor of Physics at Caltech. His research is in quantum optics and is noted for groundbreaking experiments in physics including one of the first demonstrations of teleportation of a quantum state, quantum logic gate, and the development of the first single atom laser. According to Elizabeth Rogan, OSA CEO, "Jeff has led a revolution in modern physics through his pioneering research in the coherent control of the interactions of light and matter." Kimble's main research focus is in quantum information science and the quantum dynamics of open systems.

Andrew G. White FAA is an Australian scientist and is currently Professor of Physics and a Vice-Chancellor's Senior Research Fellow at the University of Queensland. He is also Director of the University of Queensland Quantum technology Laboratory; Deputy-Director of the ARC Centre for Engineered Quantum systems, and a Program Manager in the ARC Centre for Quantum Computer and Communication Technology..

Whispering-gallery waves, or whispering-gallery modes, are a type of wave that can travel around a concave surface. Originally discovered for sound waves in the whispering gallery of St Paul’s Cathedral, they can exist for light and for other waves, with important applications in nondestructive testing, lasing, cooling and sensing, as well as in astronomy.

Ortwin Hess is a German-born theoretical physicist at Imperial College London (UK), working in condensed matter optics. Bridging condensed matter theory and quantum optics he specialises in nanophotonics, plasmonics, metamaterials and semiconductor laser dynamics. Since the late 1980s he has been an author and coauthor of over 300 peer-reviewed articles, the most popular of which, called "'Trapped rainbow' storage of light in metamaterials", was cited more than 400 times. He pioneered active nanoplasmonics and metamaterials with quantum gain and in 2014 he introduced the "stopped-light lasing" principle as a novel route to cavity-free (nano-) lasing and localisation of amplified surface plasmon polaritons, giving him an h-index of 33.

Cloud-based quantum computing is the invocation of quantum emulators, simulators or processors through the cloud. Increasingly, cloud services are being looked on as the method for providing access to quantum processing. Quantum computers achieve their massive computing power by initiating quantum physics into processing power and when users are allowed access to these quantum-powered computers through the internet it is known as quantum computing within the cloud.

Julia Kempe is a French, German, and Israeli researcher in quantum computing. Kempe was born in East Berlin to a Russian family. She was educated in Austria, Australia, France, and the US. She is currently the Director of the Center for Data Science at NYU and Professor at the Courant Institute

Giacomo Mauro D'Ariano is an Italian quantum physicist. He is a professor of theoretical physics at the University of Pavia, where he is the leader of the QUIT group. He is a member of the Center of Photonic Communication and Computing at Northwestern University; a member of the Istituto Lombardo Accademia di Scienze e Lettere; and a member of the Foundational Questions Institute (FQXi).