Last updated July 18, 2021
This article is about the London-based professional association for physicists. For other uses, see Institute of Physics (disambiguation).
Learned society and professional body

The Institute of Physics (IOP) is a UK-based learned society and professional body that works to advance physics education, research and application. [6]

It was founded in 1874 and has a worldwide membership of over 20,000. [7] The IOP is the Physical Society for the UK and Ireland and supports physics in education, research and industry. [8] In addition to this, the IOP provides services to its members including careers advice and professional development and grants the professional qualification of Chartered Physicist (CPhys), as well as Chartered Engineer (CEng) as a nominated body of the Engineering Council. [9] The IOP's publishing company, IOP Publishing, publishes 85 academic titles. [10]

The Physical Society of London had been officially formed on 14 February 1874 by Frederick Guthrie, following the canvassing of opinion of Fellows of the Royal Society by the physicist and parapsychologist Sir William Barrett at the British Association for the Advancement of Science meeting in Bradford in 1873, with John Hall Gladstone as its first president. [11] From its beginning, the society held open meetings and demonstrations and published Proceedings of the Physical Society . [11] Meetings were held every two weeks, mainly at Imperial College London. The first Guthrie lecture, now known as the Faraday Medal and Prize, was delivered in 1914.

In the early part of the 20th century, the profession of "physicist" emerged, partly as a result of the increased demand for scientists during the First World War. In 1917, following discussions between William Eccles and William Duddell, the Council of the Physical Society, along with the Faraday Society, the Optical Society, and the Roentgen Society, started to explore ways of improving the professional status of physicists, [13] and in 1918, the Institute of Physics was created at a meeting of the four societies held at King's College London. [11] In 1919, Sir Richard Glazebrook was elected first president of the institute, [14] and the inaugural meeting of the Institute took place in 1921. [11] As with the Physical Society, dissemination of knowledge was fundamental to the institute, which began publication of the Journal of Scientific Instruments in 1922. [13] The annual Reports on Progress in Physics began in 1934 [11] and is still published today. In 1952, the institute began the "Graduateship" course and examination, which ran until 1984 when the expansion of access to universities removed demand. [13]

These four grades of membership replaced the previous seven grades in January 2018; these changes introduced removed affiliate memberships for undergraduates (they are now Associate Members), removed the post-nominal letters AMInstP, and made Associate Members voting members. [19] In 2015, the membership of the Institute of Physics was 86% male at MInstP and 91% male at FInstP. 85% of Honorary Fellows were male. [20]

The institute grants academic dress to the various grades of membership. [21] Those who have passed the institute's graduateeship examination (offered 1952–1984) are entitled to a violet damask Oxford burgon-shaped hood. Corporate members (MInstP) are entitled to wear a hood of Toronto full shape in violet damask, lined in violet and faced on the cowl with 2"/5 cm [22] shot crimson silk. [21] The gown for members and those who have passed the graduateship examination is the same pattern as that used by the University of London for their Bachelor of Arts, but with the sleeves loped by violet cords and buttons, the Fellow's gown follows the pattern of the Doctor's robes of Oxford University in black with (according to Groves 2014) 4" cuffs in violet damask, or (according to the IOP website) 15 cm cuffs and 10 cm facings in violet taffeta, the cuffs slightly gathered with red cords and violet buttons. Fellows wear a doctor's bonnet in black velvet with red tassels, other grades wear a standard black mortarboard with black tassels. [23] [24]

The institute grants the professional title of Chartered Physicist (CPhys) under its own charter, Chartered Engineer (CEng), Engineering Technician (EngTech), and Incorporated Engineer (IEng) as a nominated body of the Engineering Council, and Registered Scientist (RSci) and Registered Science Technician (RSciTech) as a licensed body of the Science Council. [25] [26] Until 2001, [27] CPhys was granted automatically with MInstP, however since then it has become a separate qualification that is equal in stature to Chartered Engineer. People awarded CPhys since 2012 require re-validation every three years to retain the qualification. In order to gain the CPhys qualification, a physicist must be appropriately qualified (an accredited MSci or MPhys integrated master's degree is standard, although experience leading to an equivalent level can be counted), have had a minimum of two years of structured training and a minimum of two years responsible work experience, have demonstrated a commitment to continuing professional development, and have gained a number of competencies. [28] [29] From 2020, all CPhys holders are required to be professionally active and to submit an annual continuing professional development record. [30]

The IOP accredits undergraduate degrees (BSc/BA and MSci/MPhys) in physics in British and Irish universities. [31] At post-16 level, the IOP developed the 'Advancing Physics' A-level course, in conjunction with the OCR examining board, which is accredited by the Qualifications and Curriculum Authority. Advancing Physics was sold to Oxford University Press in January 2011. [32] The IOP also developed the Integrated Sciences degree, which is run at four universities in England. [33] The IOP provides an important educational service for secondary schools in the UK. This is the Lab in a Lorry, a mobile laboratory in a large articulated truck. This has three small laboratories where schoolchildren can try out various hands-on experiments, using physics equipment not usually available in the average school laboratory. Sponsorship is provided by EDF Energy and support from the British Science Association. IOP runs the Stimulating Physics Network, aimed at increasing the uptake of physics at A-level, and administers teacher-training scholarships funded by the Department for Education. [34] [35]

In March 2019, the Institute of Physics launched the Bell Burnell Graduate Scholarship Fund with the goal of helping female and black students to become physics researchers. The program is funded by Jocelyn Bell Burnell and provides aid to low-income students as well as those who qualify for refugee status. Bell won the Special Breakthrough Prize in Fundamental Physics in 2018 and donated the entire £2.3 million prize money to launch the fund. [36]

The institute is also interested in the ethical impact of physics, as is witnessed though the Physics and Ethics Education Project. [37]

IOP Publishing is a wholly owned subsidiary of the IOP that publishes 85 academic titles. [10] Any profits generated by the publishing company are used to fund the charitable activities of the IOP. It won the Queen's Award for Export Achievement in 1990, 1995 and 2000 and publishes a large number of journals, websites and magazines, such as the Physics World membership magazine of the Institute of Physics, which was launched in 1988.

Main article: List of presidents of the Institute of Physics

The president is elected by the membership of the institute and serves a term of two years. The current president is Jonathan Flint (2019-2021). [39] The history of the institute, from its founding as the Physical Society of London through to today's institute, has meant that the name of the post held has varied. [11] The CEO since 2012 has been Paul Hardaker. [2]

The IOP has its own coat of arms, granted in 1994. The arms feature a shield bearing a representation of an atom, and the organisation's motto "Intellegite et explicate" ("Understand and explain"). Presidents of the IOP wear a medal featuring the coat of arms at formal occasions. [11]

In 2013, the IOP bought a property in King’s Cross for use as its new headquarters. [41] This was the source of some controversy, as local residents objected to the design and size of the new building. After an initial approval in February 2015, it took almost ten months of additional negotiation before planning permission was ultimately granted by the Islington Council in December 2015. [42] [43] The IOP moved into this new building 29 October 2018. [44] 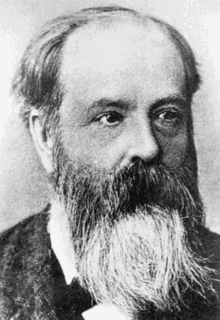 Heather Margaret Murray Reid, also known as "Heather the Weather", is a Scottish meteorologist, physicist, science communicator and educator. She was formerly a broadcaster and weather presenter for BBC Scotland.

DrErnest Arthur Davies MInstP was a British Labour Party politician. He served for one term as Member of Parliament (MP) for Stretford in North West England from 1966 to 1970, when he was defeated.

Sir James Hough is a Scottish physicist and an international leader in the search for gravitational waves. 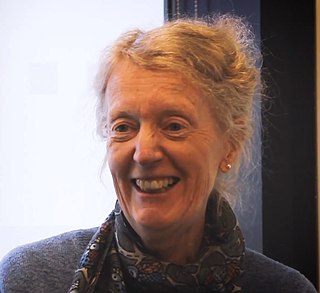 Joanna Dorothy Haigh is a British physicist and academic. Before her retirement in 2019 she was Professor of Atmospheric Physics at Imperial College London, and co-director of the Grantham Institute – Climate Change and Environment. She served as head of the department of physics at Imperial College London. She is a Fellow of the Royal Society (FRS), and a served as president of the Royal Meteorological Society.

Fellowship of the Institute of Physics (FInstP) is an award granted by the Institute of Physics (IoP) for physicists which "indicates a very high level of achievement in physics and an outstanding contribution to the profession". As of 2016 fellows include Steven Cowley, Heather Couper, and Philip Campbell. Fellows are entitled to use the post-nominal letters FInstP.

The Institute of Refrigeration is an organisation in the UK that supports the refrigeration and air-conditioning industry. 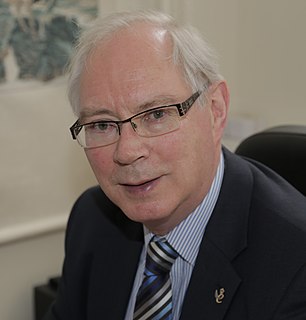 Iain Douglas Baikie, is a Scottish physicist, inventor and company Director. He specialises in Material Science. Baikie supervises PhDs at Imperial College London and the University of St Andrews in thin-film electronics. In 2000 he founded a company- KP Technology in Wick. In 1997 Baikie was appointed Professor of Applied Physics with a Chair in Materials Science for his work on surface work function and the scanning Kelvin probe and is visiting professor at the Nanotechnology and Integrated Bio-Engineering Centre at the University of Ulster, Belfast. He is an honorary professor at the University of St Andrews.

Eric Jakeman is a British mathematical physicist specialising in the statistics and quantum statistics of waves. He is an Emeritus Professor at the University of Nottingham.

Michael Andrew Parker is a British physicist and is professor of high energy physics at the University of Cambridge. Parker attended Queen Elizabeth's Hospital, Bristol and in 1978 graduated with a Class II degree in Natural Sciences from the University of Oxford, which he followed with a PhD from University College London. Parker was appointed head of the Cavendish Laboratory in 2013.

Wendy Ruth Flavell is Vice Dean for Research and a Professor of Surface Physics in the School of Physics and Astronomy at the University of Manchester. Her research investigates the electronic structure of complex metal oxides, chalcogenides, photoemission and photovoltaics.

Ann Marks was a British Physics teacher and science communicator.