This is a list of science parks in the United Kingdom.

A red brick university was originally one of the nine civic universities founded in the major industrial cities of England in the 19th century. However, with the 1960s proliferation of universities and the reclassification of polytechnics in the Further and Higher Education Act 1992 as post-1992 universities, all British universities founded in the late 19th and early 20th centuries in major cities are now sometimes referred to as "red brick". Six of the original redbrick institutions, or their predecessor institutes, gained university status before World War I and were initially established as civic science or engineering colleges. Eight of the nine original institutions are members of the Russell Group. 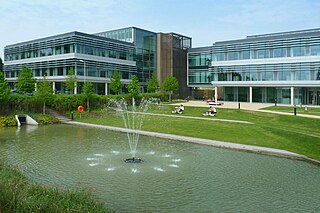 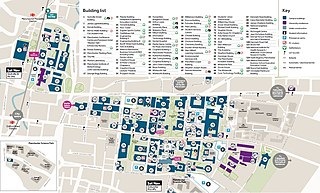 A campus university is a British term for a university situated on one site, with student accommodation, teaching and research facilities, and leisure activities all together. It is derived from the Latin term campus, meaning "a flat expanse of land, plain, field".

A Master of Mathematics degree is a specific integrated master's degree for courses in the field of mathematics.

NHSF (UK) stands for the National Hindu Students' Forum (UK). NHSF (UK) is the national network of Hindu Societies operating on University and Further Education campuses around the United Kingdom. It was started in 1991 from a stall at a Hindu Marathon, but now operates in around 40 different institutions around the United Kingdom. The organization is affiliated to Hindu Swayamsevak Sangh of UK. Until 1991, there was no representation for Hindu students at a campus level and so the first Hindu society, at London School of Economics, was set up to cater for these needs. Although in its early years there was large scale opposition to the creation of Hindu societies, with people arguing that the existing Asian or Indian societies sufficed, NHSF (UK) has now become a firmly established movement.

BioCity Nottingham is a bioscience science park in central Nottingham in the United Kingdom. It is the UK's largest bioscience innovation and incubation centre. 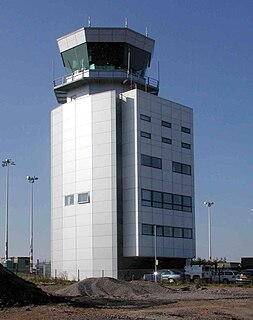 CPMG Architects is an architectural practice based at 23 Warser Gate in Nottingham.

The Rosalind Franklin Institute is medical research centre supported by the Government of the United Kingdom located at the Harwell Science and Innovation Campus, Oxfordshire, England. It was launched on 6 June 2018. The government approval was announced on 23 February 2017 by Greg Clark, Secretary of State for Business, Energy and Industrial Strategy. According to the press release the basis of the name was "in honour of the pioneering British scientist [Rosalind Franklin] whose use of X-rays to study biological structures played a crucial role in the discovery of DNA's 'double helix' structure by Francis Crick and James Watson". The objective was "to develop disruptive new technologies designed to tackle major challenges in health and life sciences, accelerate the discovery of new treatments for chronic diseases affecting millions of people around the world, and deliver new jobs and long-term growth to the local and UK economies."