This is a list of universities in the United Kingdom (alphabetical by substantive name). Below that are lists of university colleges and other recognised bodies (institutions with degree awarding powers), followed by a list of defunct institutions.

Member institutions of the University of London

This section lists other education institutions that hold their own degree awarding powers but are neither universities (or colleges of the University of London) nor university colleges. [1]

Recognised bodies that can only award foundation degrees

These institutions are recognised bodies with foundation degree awarding powers only. [1]

Foreign universities with campuses in the United Kingdom

While based in the UK, these are not considered UK universities and are not recognised as UK degree-awarding bodies by the British government unless separately listed in one of the categories above.

There are 40 "Overseas Higher Education Institutions" that have been approved for student visa purposes by the UK Government as offering "an overseas course of degree level study that's equal to a UK higher education course". [16] [17] There are also two branches of overseas universities that are "listed bodies", offering courses leading to a UK degree from a "registered body". [18] The following are approved overseas higher education institutions and foreign universities that are listed bodies in the UK, with their UK locations:

Universities in British Overseas Territories are not considered UK Universities and are not recognised as UK degree-awarding bodies by the British government. [24]

Main article: List of universities in the Cayman Islands

The University of London is a federal public research university located in London, England, United Kingdom. The university was established by royal charter in 1836 as a degree-awarding examination board for students holding certificates from University College London and King's College London and "other such other Institutions, corporate or unincorporated, as shall be established for the purpose of Education, whether within the Metropolis or elsewhere within our United Kingdom". This fact allows it to be one of three institutions to claim the title of the third-oldest university in England, and moved to a federal structure in 1900. It is now incorporated by its fourth (1863) royal charter and governed by the University of London Act 2018.

Universities in the United Kingdom have generally been instituted by royal charter, papal bull, Act of Parliament, or an instrument of government under the Further and Higher Education Act 1992 or the Higher Education and Research Act 2017. Degree awarding powers and the 'university' title are protected by law, although the precise arrangements for gaining these vary between the constituent countries of the United Kingdom.

A red brick university was originally one of the nine civic universities founded in the major industrial cities of England in the 19th century. However, with the 1960s proliferation of universities and the reclassification of polytechnics in the Further and Higher Education Act 1992 as post-1992 universities, all British universities founded in the late 19th and early 20th centuries in major cities are now sometimes referred to as "red brick". Six of the original redbrick institutions, or their predecessor institutes, gained university status before World War I and were initially established as civic science or engineering colleges. Eight of the nine original institutions are members of the Russell Group. 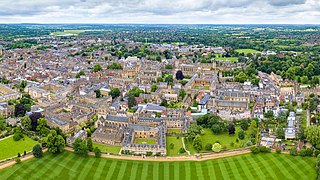 The Russell Group is a self-selected association of twenty-four public research universities in the United Kingdom. The group is headquartered in Cambridge and was established in 1994 to represent its members' interests, principally to government and Parliament. It was incorporated in 2007. Its members are often perceived as the UK's most prestigious universities, but this has been disputed.

The Officers' Training Corps (OTC), more fully called the University Officers' Training Corps (UOTC), are military leadership training units operated by the British Army. Their focus is to develop the leadership abilities of their members whilst giving them an opportunity to take part in military life whilst at university. OTCs also organise non-military outdoor pursuits such as hill walking and mountaineering. UOTC units are not deployable units nor are their cadets classed as trained soldiers. The majority of members of the UOTC do not go on to serve in the regular or reserve forces.

Research Libraries UK (RLUK) comprises 32 university libraries, 3 national libraries, and the Wellcome Collection in the United Kingdom and Ireland. Its aim is to increase the ability of research libraries to share resources among themselves. The holdings of these libraries provide the basis of the Copac online catalogue.

Colleges within universities in the United Kingdom can be divided into two broad categories: those in federal universities such as the University of London, which are primarily teaching institutions joined in a federation, and residential colleges in universities following the traditional collegiate pattern of Oxford and Cambridge, which may have academic responsibilities but are primarily residential and social. The legal status of colleges varies widely, both with regard to their corporate status and their status as educational bodies. London colleges are all considered 'recognised bodies' with the power to confer University of London degrees and, in many cases, their own degrees. Colleges of Oxford, Cambridge, Durham and the University of the Highlands and Islands (UHI) are 'listed bodies', as "bodies that appear to the Secretary of State to be constituent colleges, schools, halls or other institutions of a university". Colleges of the plate glass universities of Kent, Lancaster and York, along with those of the University of Roehampton and the University of the Arts London do not have this legal recognition. Colleges of Oxford, Cambridge, London, and UHI, and the "recognised colleges" and "licensed halls" of Durham, are separate corporations, while the colleges of other universities, the "maintained colleges" of Durham, and the "societies of the university" at Oxford are parts of their parent universities and do not have independent corporate existence.

The Master of Sciences of Pharmacy (MPharm) is the standard master's degree program in Pharmacy. It is the oldest honorable Diploma (Degree) authorized from the European Faculties of Pharmacy as it takes five years to complete. It is based on a credit system higher than the normal Bachelor of Pharmacy degree. It is different from the American Pharmaceutical Diploma, Doctor of Pharmacy,(PharmD), that takes 4 years to complete. The Faculty is a member of the Association of European Faculties of Pharmacy and its graduates meet all the requirements for the profession as defined by the European Union. In the initial three years students revise and broaden their knowledge of elementary natural and medical subjects to the level required for understanding specific subjects from the field of Pharmacy. Students attend lectures and seminars and take part in practical pharmacy placements. During the last year of study they work on their thesis. The program is concluded by defending the thesis and taking the final state examination. Then the students are awarded the master's degree. The study program is compliant with EU directive 2005/36/EC. Graduates awarded the master's degree can later sit for a thorough state exam including an advanced thesis defense. After passing they are awarded the "Testing Board" degree. Graduates can apply for postgraduate after studying several branches of Pharmacy in the five accredited years. After defending their dissertation, submit their researches in their selected branches of Pharmacy and passing the final state examination they are awarded the degree. The master's program is offered in different specialized areas, one major being Clinical Pharmacy. Clinical pharmacy specialization enables pharmacists to deliver higher levels of clinical services. In some countries these specializations are happening with residency programs.

A university charter is a charter issued by an authority to create or recognize a university. The earliest universities – Bologna, Paris and Oxford – arose organically from concentrations of schools in those cities rather than being created by charters. The first university charters were issued in Europe in the 13th century, with the University of Naples, created by a charter of Emperor Frederick II in 1224, being widely considered the first deliberately-created university ; King Alfonso VIII of Castille issued a charter in 1208 to create the University of Palencia but the status of that institution is doubtful. The first papal creation was the University of Toulouse in 1229, via a papal bull of Pope Gregory IX. Through the 13th century, most university foundations continued to be organic, often by migrations of scholars from other universities, but by the start of the 14th century either a papal bull or an imperial charter was considered necessary.

A polytechnic was a tertiary education teaching institution in England, Wales and Northern Ireland offering higher diplomas, undergraduate degree and post graduate education that was governed and administered at the national level by the Council for National Academic Awards. At the outset, the focus of polytechnics was on STEM subjects with a special emphasis on engineering. After the passage of the Further and Higher Education Act 1992 they became independent universities which meant they could award their own degrees. The comparable institutions in Scotland were collectively referred to as Central Institutions.