Last updated September 14, 2021
Drama school in Hammersmith, London
"LAMDA" redirects here. It is not to be confused with the Greek letter Lambda.

The London Academy of Music and Dramatic Art (LAMDA) is a drama school located in Hammersmith, London. It is the oldest specialist drama school in the British Isles and a founding member of the Federation of Drama Schools. [1]

LAMDA's Director is Sarah Frankcom, who succeeded the Principal Joanna Read in 2019. [2] [3] Benedict Cumberbatch succeeded Timothy West as President of LAMDA's Board of Trustees in 2018. [4]

The Academy's graduates work regularly at the Royal National Theatre, the Royal Shakespeare Company, Shakespeare's Globe, and the theatres of London's West End and Hollywood, as well as on the BBC, HBO, and Broadway. It is registered as a company under the name LAMDA Ltd [5] and as a charity under its trading name London Academy of Music and Dramatic Art. [6] There is an associate organisation in America under the name of American Friends of LAMDA (AFLAMDA). [7] [8] A very high proportion of LAMDA's stage management and technical theatre graduates find work in their chosen field within weeks of graduation. As of April 2021, LAMDA alumni have won 5 Academy Awards (with 8 additional Oscar nominations), 8 SAG Awards, 12 Tonys, 15 Emmys, 19 Golden Globes, 21 BAFTAs, and 38 Olivier Awards. [9] [10] [11] [12]

LAMDA Examinations in the fields of speech, drama, communication, and performance are taken by external students and are recognised by Ofqual, the regulator in England, and its counterparts in Wales and Northern Ireland. LAMDA-accredited examinations at Level 3 or above are recognised within the UCAS Tariff system.

The London Academy of Music was founded by Henry Wylde in 1861; [13] this makes the Academy the oldest of its kind in Britain[ citation needed ], after - for example - the Royal Academy of Music (1822) and the Crystal Palace School of Art, Science, and Literature (1854). Providing training for, and examinations in, various musical disciplines was originally the dominant purpose of the institution. However, providing instruction in spoken English quickly became a core area of the Academy's work.

In the 1880s, LAMDA began offering speech examinations to the public. Since then, these examinations have been refined and developed into a comprehensive system of performance evaluation. LAMDA Examinations has emerged as the largest Speech and Drama Board in the United Kingdom.

In 1904, the school was amalgamated with two other London music institutions that had sprung up since the academy was founded, namely the London Music School (founded 1865) and the Forest Gate School of Music (founded 1885) renamed in 1906 the Metropolitan Academy of Music. (The Metropolitan Academy of Music severed its links with the London Academy of Music in 1907. [14] ) In due course the Hampstead Academy was also amalgamated. The name was changed to the current name in 1935, under the direction of Wilfrid Foulis. In 1939, it was moved from London due to the war; when it reopened in 1945, it no longer provided musical training. [13]

In August 2021 it was announced that Sarah Frankcom would step down as Director, and that LAMDA was conducting a search for a successor. [17]

In 2003, LAMDA decided to move its teaching school and theatre to its current location in Hammersmith in West London. It acquired the old premises of the Royal Ballet School on Talgarth Road.

The move to the Talgarth Road enabled LAMDA to develop a campus with new training facilities designed by Niall McLaughlin Architects. [18] The site was previously home to the Royal Ballet School, which moved to new, purpose-built facilities adjacent to the Royal Opera House.

The LAMDA complex has three theatres and various rehearsal spaces and meeting rooms. The three theatres are the Sainsbury Theatre, the Carne Studio Theatre and the Linbury Studio. [19]

See also: Category:Alumni of the London Academy of Music and Dramatic Art 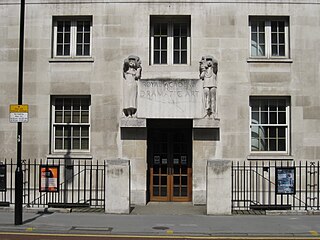 The Royal Academy of Dramatic Art is a drama school in London, England, that provides vocational conservatoire training for theatre, television, film, and radio. It is based in the Bloomsbury area of Central London, close to the Senate House complex of the University of London and is a founding member of the Federation of Drama Schools. It is one of the oldest drama schools in the United Kingdom, founded in 1904 by Sir Herbert Beerbohm Tree. It moved to buildings on Gower Street in 1905. It was granted a Royal Charter in 1920 and a new theatre was built on Malet Street, behind the Gower Street buildings that was opened by Edward, Prince of Wales, in 1921. It received its first government subsidy in 1924. RADA currently has five theatres and a cinema. The school’s Principal Industry Partner is Warner Bros. Entertainment.

The Conservatoire for Dance and Drama is a higher education institution in the United Kingdom. It was founded in 2001 to bring together a number of schools providing higher-level vocational training in the performing arts. There are six member schools and two affiliate schools. These are:

Benedict Timothy Carlton Cumberbatch is an English actor. He is known for his performances on the stage and screen and has received numerous accolades, including a Emmy Award, a BAFTA, and a Olivier Award. Cumberbatch has won the Laurence Olivier Award for Best Actor in a Leading Role in a Play for Frankenstein and a Primetime Emmy Award for Outstanding Lead Actor in a Miniseries or Movie for Sherlock. His performance in The Imitation Game (2014) earned him nominations for an Academy Award, BAFTA Award, Screen Actors Guild Award and Golden Globe Award, all for Best Actor in a Leading Role. For playing the title role in five-part drama miniseries Patrick Melrose, he won BAFTA TV Award for Best Actor in a Leading Role. In 2014 Time magazine included him in its annual list of the 100 most influential people in the world, and in 2015 he was appointed a CBE by Queen Elizabeth II in the 2015 Birthday Honours for services to the performing arts and to charity. 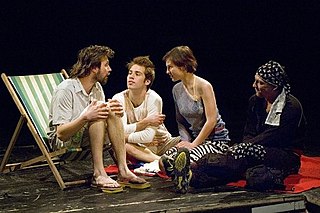 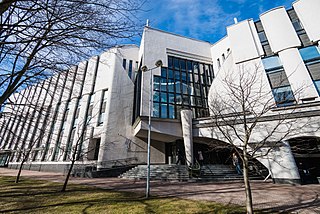 The Estonian Academy of Music and Theatre began as a mixed choir of the Estonia Society Musical Department (EMD) on the eve of World War I. The assembly of the Estonia Society created the Tallinn Higher Music School on November 17, 1918. The opening ceremony took place on September 28, 1919. In 1923 the educational institution was renamed the Tallinn Conservatoire. In 1938 the State Drama School was opened. In 1993 the school was renamed the “Estonian Academy of Music”. In 1995 the Drama Faculty was renamed the Higher Theatre School.

Education in the performing arts is a key part of many primary and secondary education curricula and is also available as a specialisation at the tertiary level. The performing arts, which include, but are not limited to dance, music and theatre, are key elements of culture and engage participants at a number of levels.

Oshwal Academy is a private, co-educational institution situated in Nairobi and Mombasa, Kenya, which is owned and managed by Oshwal Education and Relief Board, which also owns four private schools and hostels in Nairobi, Kenya.

James Robert Alexander Chalmers is an English actor who has performed in film, television and theatre. Chalmers graduated from the University of Edinburgh and continued his training at the London Academy of Music and Dramatic Art. He first performed with the Royal Shakespeare Company in Spanish Golden Age productions and made his West End debut when the season transferred to the Playhouse Theatre in 2005. He has performed with Shakespeare's Globe and the Read Not Dead project, Royal Court Theatre, Northcott Theatre, Royal National Theatre (studio), Theatre503, and the Park Theatre (London).

The Conference of Drama Schools (CDS) was the organisation which represented the top 21 accredited UK drama schools in the United Kingdom from 1969 until 2012.

Gary Carr is an English stage, film and television actor, dancer and musician. He has had main character roles in BBC TV series Death in Paradise and US TV series The Deuce. He is also known for playing American Jazz singer Jack Ross in the ITV historical drama Downton Abbey. 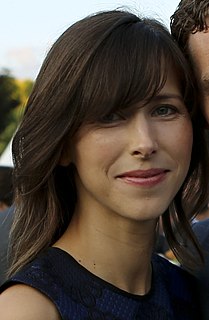 Sophie Irene Hunter is an English avant-garde theatre and opera director, playwright, and former performer. She made her directorial debut in 2007 co-directing the experimental play The Terrific Electric at the Barbican Pit after her theatre company Boileroom was granted the Samuel Beckett Theatre Trust Award. In addition, she has directed an Off-Off-Broadway revival of Henrik Ibsen's Ghosts (2010) at Access Theatre, the performance art titled Lucretia (2011) based on Benjamin Britten's opera The Rape of Lucretia at Location One's Abramovic Studio in New York City, and the Phantom Limb Company's 69° South also known as Shackleton Project (2011) which premièred at the Brooklyn Academy of Music's Harvey Theatre and later toured North America.

Jack Farthing is an English actor who is notable for playing Freddie Threepwood in Blandings (2013–2014) and villain George Warleggan in the BBC One drama series Poldark (2015–2019). He also appeared as George Balfour in The Riot Club (2014) and Marc Fisher in the Netflix romantic comedy Love Wedding Repeat (2020).

Charles Babalola is a British actor.

The Federation of Drama Schools functions to facilitate vocational drama training in the UK. It was formed in June 2017.

Kobna Kuttah Holdbrook-Smith is a Ghanaian-British actor known for his film, television, theatre and voice work.