Joanna Woodall (born 1956) is an art historian at the Courtauld Institute of Art, London, where she is a specialist in portraiture and Netherlandish art.

Woodall has a BA degree in history from the University of York and an MA and PhD from the Courtauld Institute.

Woodall was a Speelman Fellow in Dutch and Flemish Art at Wolfson College, Cambridge, from 1980 to 1982, [1] and an assistant curator at Christ Church Picture Gallery, Oxford, from 1982 to 1985. [2] She spent a year on a Leverhulme Fellowship at the University of Leiden. [3]

She has been at the Courtauld Institute of Art since 1986 where she specialises in portraiture and Netherlandish art. Woodall is also a member of the editorial board of the Nederlands Kunsthistorisch Jaarboek (Netherlands Yearbook for History of Art). [3]

In 2010, Woodall was with a group of Courtauld students protesting about increased university tuition fees when they reportedly received rough treatment from the Metropolitan Police with Woodall herself being picked up by an officer and thrown into a group of protestors. [4]

The Courtauld Institute of Art, commonly referred to as The Courtauld, is a self-governing college of the University of London specialising in the study of the history of art and conservation. It is widely known for the disproportionate number of directors of major museums drawn from its small body of alumni.

The Courtauld Gallery is an art museum in Somerset House, on the Strand in central London. It houses the art collection of the Courtauld Institute of Art, a self-governing college of the University of London specialising in the study of the history of art. 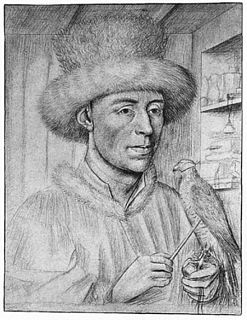 Petrus Christus was an Early Netherlandish painter active in Bruges from 1444, where, along with Hans Memling, he became the leading painter after the death of Jan van Eyck. He was influenced by van Eyck and Rogier van der Weyden and is noted for his innovations with linear perspective and a meticulous technique which seems derived from miniatures and manuscript illumination. Today, some 30 works are confidently attributed to him. The best-known include the 1446 Portrait of a Carthusian and c. 1470 Berlin Portrait of a Young Girl, both are highly innovative in presentation of the figure against detailed, rather than flat, backgrounds.

Christ Church Picture Gallery is an art museum at Christ Church, one of the colleges of Oxford University in England. The gallery holds an important collection of about 300 Old Master paintings and nearly 2,000 drawings. It is one of the most important private collections in the United Kingdom. The greater part of the collection was bequeathed by a former member of the college, General John Guise, arriving after his death in 1765. Further gifts and bequests were made by W. T. H. Fox-Strangways, Walter Savage Landor, Sir Richard Nosworthy & C.R. Patterson. 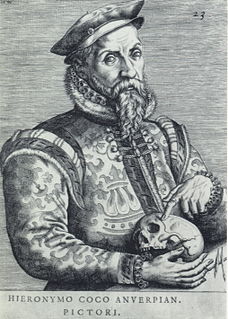 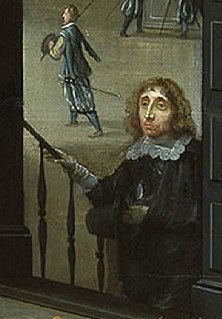 Willem van Haecht was a Flemish painter best known for his pictures of art galleries and collections.

Portrait of a Lady is a small oil-on-oak panel painting executed around 1460 by the Netherlandish painter Rogier van der Weyden. The composition is built from the geometric shapes that form the lines of the woman's veil, neckline, face, and arms, and by the fall of the light that illuminates her face and headdress. The vivid contrasts of darkness and light enhance the almost unnatural beauty and Gothic elegance of the model. 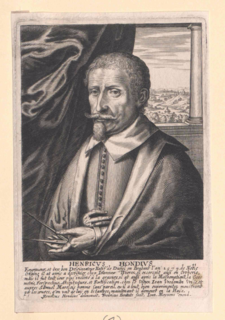 Hendrik Hondius I, Henricus Hondius I or Hendrik Hondius the Elder (1573–1650), was a Flemish-born and trained engraver, cartographer and publisher who settled in the Dutch Republic in 1597.

Ian Lorne Campbell is a Scottish art historian and curator. Campbell was Beaumont Senior Research Curator at the National Gallery, London from 1996 to 2012, and from 1974 to 1996 lectured on the Northern Renaissance at the Courtauld Institute of Art, University of London. He has curated major exhibitions at the National Gallery and other museums, including ones on Rogier van der Weyden at Leuven in 2009 and the Prado in 2015.

Ann Sumner is an art historian, exhibition curator, author and former museum director. She is currently Visiting Professor at Manchester Metropolitan University and Chair of the Methodist Modern Art Collection. She was the Head of Public Engagement at the University of Leeds, where she led the Public Art Programme. She was Historic Collections Adviser at Harewood House Trust, where she led the Chippendale 300 celebrations. In 2018 she was made a Fellow of Aberystwyth University in 2018 She was the executive director of the Brontë Society, a former director of the Barber Institute of Fine Arts at Birmingham University, England (2007–2012), and the first director of the Birmingham Museums Trust, comprising the merged Birmingham Museum and Art Gallery and Thinktank, from 2012 until 2013.

Lotte Brand Philip was a German art historian, professor and expert on Netherlandish art, one of the most notable and incisive experts on 14th- and 15th-century art to have studied under Erwin Panofsky. Born a Christian of Jewish descent, she resisted state intimidation to leave Germany, only moving to the United States in 1941. She began her new life as a jewelry designer, before establishing a career as an art historian and writer, and taking professorship at a number of universities, including New York University and Queens College, Flushing. During her long career, Brand wrote highly regarded books and monographs on artists such as Jan van Eyck, Albrecht Dürer and Hieronymus Bosch, and in 1980 became emeritus at Queens. Brand Philip died on May 2, 1986 in New York City.

Aileen Ribeiro is a historian of fashion and author of several books about the history of costume.

Landscape with the Flight into Egypt is a 1563 oil on wooden board painting by Pieter Bruegel the Elder, showing the biblical Flight into Egypt of Mary and Joseph with the infant Jesus. It measures 37.1 by 55.6 centimetres and is displayed at the Courtauld Gallery in London.

Frits Scholten is a Dutch art historian specialising in art of the Netherlands from the late Middle Ages until 1800, and sculpture from the 15th to 19th centuries. Currently he is Head of Department of Sculpture and the Rijksmuseum in Amsterdam. Previously he was senior curator of sculpture at the Rijksmuseum from 1993, prior to which he worked at the Gemeentemuseum Den Haag. Scholten has published extensively on applied arts and European sculpture. He is editor of the Nederlands Kunsthistorisch Jaarboek and the Wallraf-Richartz Museum Jahrbuch.

Kim Wilford Woods is an art historian specialising in northern European late Gothic sculpture and is Senior Lecturer in art history at the Open University.

Christa Grössinger was a German academic specialising in late medieval and early Renaissance art in northern Europe. She was a Fellow of the Society of Antiquaries of London. Grössinger was an expert on misericords and medieval church furniture. Her work included the role of women in medieval and Renaissance art and on women and women's writings from antiquity to the late Middle Ages. She joined the University of Manchester in 1972 where she became a Senior Lecturer.