John W. Kawaja (born April 27, 1961[ citation needed ] in Chandler, Quebec) is a Canadian curler. He is a two-time Brier and World Champion.

Kawaja was named to the Canadian Curling Hall of Fame in 1991. [1] In 2009, Kawaja and his 1983 world champion team (Werenich, Paul Savage and John Kawaja) were inducted into the Ontario Sports Hall of Fame. [2]

Kawaja retired from curling in 1997. After working with Bata Shoes to work on a curling shoe design, he moved on to work with Adidas after retiring from curling. He later became president of the Taylormade golf company. [3] He resides in San Diego, California.

Richard "the Hart Surgeon" Hart is a Canadian curler from Pickering, Ontario. He is a Brier and world champion, as well as an Olympic silver medallist.

Ian J. Tetley is a Canadian curler from Oakville, Ontario. He is a three-time Brier and World Champion. 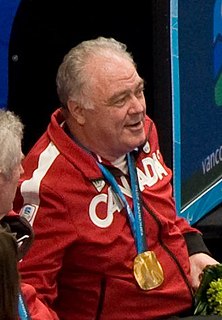 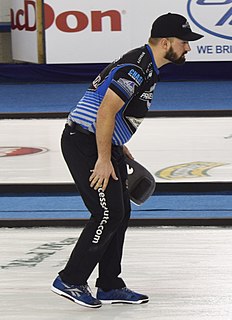