John Puhiatau Pule ONZM (born 18 April 1962) is a Niuean artist, novelist and poet. The Queensland Art Gallery describes him as "one of the Pacific's most significant artists". [1]

Describing the beginning of his literary career, Pule explained:

“I just wanted to write about growing up in New Zealand, and about being the youngest of 17 kids and about migration—but I wasn’t sure how to organise ideas, so I just started writing.” [4]

He also described his writing as a means of "decolonizing his mind". [4] His work expresses his experience as a Niuean in New Zealand:

“My heart and my thoughts were always on Niue. But here I was living in Aotearoa on someone else's land. Writing helped change me, painting helped change me. I went back to Niue as often as I could, and I'd weed and clear the graves for my family and friends' families. It's a way of saying I'm back. [...] We go back home [to Niue] with our Nikes and our jeans and we think we know things. But the local people just think we're stupid. They know where all the trees are and the pathways and where the mythologies and the stories live." [4]

In 2000 Pule was the University of Auckland Literary Fellow and in 2002 took up a distinguished visiting writer's residency in the department of English at the University of Hawaii. In 2005 he was awarded an art residency at Roemerapotheke, Basel, Switzerland and in 2004 he was honoured with the prestigious Laureate Award from the Arts Foundation of New Zealand. [7] In the 2012 Queen's Birthday and Diamond Jubilee Honours, Pule was appointed an Officer of the New Zealand Order of Merit for services as an author, poet and painter. [8] He was awarded the Ursula Bethell Residency in Creative Writing at the University of Canterbury in 2013.

Poetry by Pule was included in UPU, a curation of Pacific Island writers’ work which was first presented at the Silo Theatre as part of the Auckland Arts Festival in March 2020. [9] UPU was remounted as part of the Kia Mau Festival in Wellington in June 2021. [10]

Pule's artwork includes painting, drawing, printmaking, film-making and performance. The topics of his work include Niuean cosmology and Christianity, as well as perspectives on migration and colonialism. [1] His work comprises both painting on canvas and bark cloth painting, a traditional Polynesian artform. [4]

Pule was a guest professor of creative writing at the University of Hawai'i in the spring of 2002. [4] In 2005, he co-wrote Hiapo: Past and present in Niuean barkcloth, a study of a traditional Niuean artform, with Australian writer and anthropologist Nicholas Thomas. [11]

Since 1991 Pule has exhibited extensively throughout New Zealand, Australia, Europe, the USA, the Pacific and Asia. From 1996 to present he has held solo exhibitions in New Zealand, and in Melbourne Australia at the Karen Woodbury Gallery. [12] In 2005 he exhibited at the Galerie Romerapotheke in Zurich. [7]

Hauaga (Arrivals) was a show of Pule's art organised by City Gallery Wellington in 2010, which toured other galleries around New Zealand, including Gow Langsford Gallery in Auckland. [13] [14]

Richard John Frizzell is a New Zealand artist known for his pop art paintings and prints. His work often features Kiwiana iconography combined with motifs from Māori art traditions, such as the tiki and tā moko. He is based in Auckland. 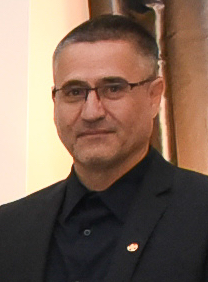 Maxwell Harold Gimblett, is a New Zealand and American artist. His work, a harmonious postwar synthesis of American and Japanese art, brings together abstract expressionism, modernism, spiritual abstraction, and Zen calligraphy. Gimblett’s work was included in the exhibition The Third Mind: American Artists Contemplate Asia, 1869-1989 at the Guggenheim Museum and is represented in that museum's collection as well as thee collections of the Museum of Modern Art, Whitney Museum of Art, National Gallery of Art, San Francisco Museum of Modern Art, Museum of New Zealand Te Papa Tongarewa, and the Auckland Art Gallery Toi O Tamaki, among others. Through out the year Gimblett leads sumi ink workshops all over the world. In 2006 he was appointed Inaugural Visiting Professor at the National Institute of Creative Arts and Industries, Auckland University. Gimblett has received honorary doctorates from Waikato University and the Auckland University of Technology and was awarded the Officer of the New Zealand Order of Merit (ONZM). He lives and works in New York and has returned to New Zealand over 65 times.

Gow Langsford Gallery is an art gallery in Auckland, New Zealand. The gallery was established in 1987 by John Gow and Gary Langsford. Gow Langsford represents and has represented many significant New Zealand and international artists, including Max Gimblett, Jacqueline Fahey, Paul Dibble and Dick Frizzell.

Darryn George is a New Zealand artist of Ngāpuhi descent who is based in Christchurch.

John Walsh is a painter who was born in 1954 in Tolaga Bay, New Zealand. He is of Aitanga a Hauiti/ New Zealand Irish descent. Although he attended Ilam School of Fine Arts in Christchurch between 1973 and 1974, he is largely a self-taught artist. He now lives and works in Wellington, New Zealand.

Ian Christopher Scott was a New Zealand painter. His work was significant for pursuing an international scope and vision within a local context previously dominated by regionalist and national concerns. Over the course of his career he consistently sought to push his work towards new possibilities for painting, in the process moving between abstraction and representation, and using controversial themes and approaches, while maintaining a highly personal and recognisable style. His work spans a wide range of concerns including the New Zealand landscape, popular imagery, appropriation and art historical references. Scott's paintings are distinctive for their intensity of colour and light. His approach to painting is aligned with the modernist tradition, responding to the formal standards set by the American painters Morris Louis, Kenneth Noland and Jules Olitski.

Suzanne Tamaki is a New Zealand fibre-based artist of Te Arawa, Ngāti Maniapoto and Tūhoe descent. She operates under the label Native Sista and was one of the founding members of the Pacific Sisters. Informed by indigenous concerns of Aotearoa, New Zealand, Tamaki's jewellery, fashion and photography portrays a reclamation of colonised spaces. As Megan Tamati-Quenell writes of her work 'They are created conceptually, provocatively and with political intent'. 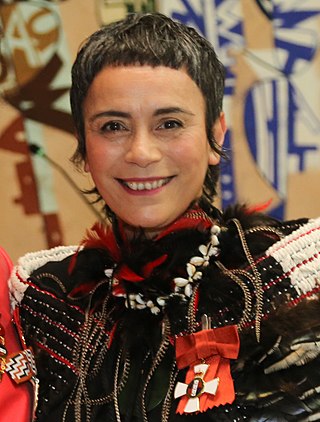 Lisa Marie Reihana is a New Zealand artist. Her video work, In Pursuit of Venus [Infected] (2015), which examines early encounters between Polynesians and European explorers, was featured at the 2017 Venice Biennale.

Emily (Emare) Karaka is a New Zealand artist of Māori descent Her work is recognised for "its expressive intensity, her use of high key colour, and her gritty address of political issues related to Māori land rights and the Treaty of Waitangi".

Gavin John Hipkins is a New Zealand photographer and film-maker, and Associate Professor at Elam School of Fine Arts, at the University of Auckland.

Mervyn John Williams is a New Zealand artist. He was an early exponent of Op art in New Zealand in the 1960s–70s. In 1990 he originated a style of illusionary abstract painting based on chiaroscuro, creating the impression of three-dimensional forms and textures on a flat canvas. Since 2009 he has used digital techniques in returning to an Op art style. Williams is almost unique amongst his contemporaries in New Zealand art for having embraced abstraction at the start of his career and exclusively throughout. His work is held in all major New Zealand public collections. A monograph by Edward Hanfling was published by Ron Sang in 2014 coinciding with a survey exhibition.

Janet Lilo is a visual artist from New Zealand.

Denis O'Connor is a New Zealand-based ceramicist, sculptor, and writer who has exhibited both in New Zealand and internationally.