John Townson (Died 1835) was an army officer and settler in the colony of New South Wales. He entered the 18th Regiment of Foot in 1779 and was part of the Gibraltar garrison. He transferred to the New South Wales Corps in October 1789 and arrived in Sydney on the Second Fleet ship Scarborough in June 1790.

Townson spent most of his military service in the colony at Norfolk Island where he was stationed for six years and received a twenty-acre (81,000 m2) lease. In 1794 he was a member of the court of inquiry investigating Lieutenant Governor King's actions during the 1793 mutiny on the island. He was promoted and captain, and from September 1796 to November 1799 acted as lieutenant-governor of Norfolk Island while King was absent in England.

His administration was generally efficient and he seems to have had a steadying influence on the population of convicts and settlers. During his regime, the only ship built on the island, the sloop Norfolk , used by Matthew Flinders to circumnavigate Van Diemen's Land, was constructed in 1798. He lacked confidence in Governor Hunter and his complaints to England played a part in Hunter's recall.

Townson left Norfolk Island in 1800 and returned to England, where through illness he retired and sold his commission in July 1803.

He returned to Sydney in 1806, and after come controversy was granted 2000 acres (8 km2) in the Bexley and Hurstville districts. He sold these in 1812 and developed further grants on the Tamar River in Van Diemen's Land. Townson died in Sydney on 8 July 1835, leaving an estate worth £5,000.

Townson is described by his biographer as "an efficient, if unspectacular, administrator." Unlike many of his fellow New South Wales Corps officers, he does not seem to have been involved in the rum traffic. He was generally well liked by his contemporaries but ill-health and deafness led him to avoid public life, and earned him a reputation in his later years "of being unsettled and querulous." 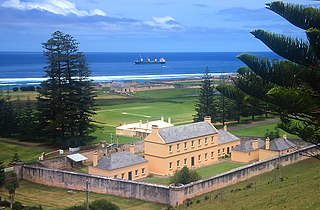 The history of Norfolk Island dates back to the fourteenth or fifteenth century when it was settled by Polynesian seafarers.

This article describes the history of the Australian colony and state of Victoria. 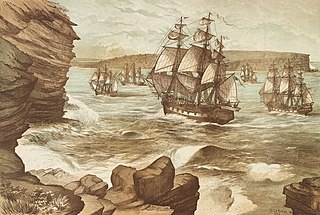 The First Fleet was the 11 ships that departed from Portsmouth, England, on 13 May 1787 to found New South Wales, the penal colony that became the first European settlement in Australia. The Fleet consisted of two Royal Navy vessels, three store ships and six convict transports, carrying between 1,000 and 1,500 convicts, marines, seamen, civil officers and free people, and a large quantity of stores. From England, the Fleet sailed southwest to Rio de Janeiro, then east to Cape Town and via the Great Southern Ocean to Botany Bay, over the period of 18-20 January 1788, taking 250 to 252 days from departure to final arrival. During the period 25-26 January 1788 the fleet moved from Botany Bay to present-day Sydney. 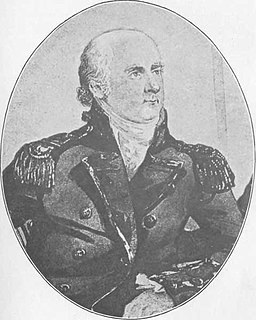 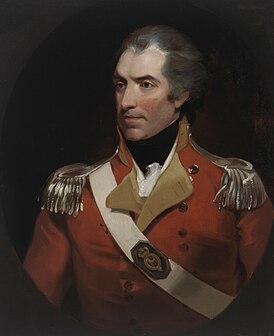 William Balmain was a Scottish-born naval surgeon and civil administrator who sailed as an assistant surgeon with the First Fleet to establish the first European settlement in Australia, and later to take up the appointment of the principal surgeon, for New South Wales.

The history of Australia from 1788–1850 covers the early colonial period of Australia's history, from the arrival in 1788 of the First Fleet of British ships at Sydney, New South Wales, who established the penal colony, the scientific exploration of the continent and later, establishment of other Australian colonies. European colonisation created a new dominant society in Australia in place of the pre-existing population of Aboriginal Australians. 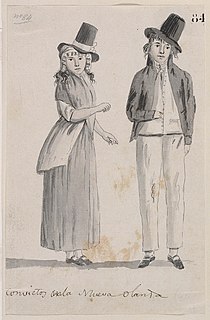 Henry Hacking (1750–1831) was a seaman and early invader in New South Wales, Australia. He was a convicted murderer, and also responsible for shooting and killing the Aboriginal resistance fighter Pemulwuy in 1802.

The Lieutenant Governor's Court was a court established in the early 19th century in the colony of Van Diemen's Land which subsequently became Tasmania, a state of Australia. The court had jurisdiction to deal with civil disputes where the amount in dispute was not more than £50 sterling in the colony. The establishment of the court was the first practical civil court in the settlement. This was an important first step in improving the resolution of civil disputes in the settlement. The Supreme Court of Van Diemen's Land eventually replaced it in 1823 when the court's charter was revoked by the Third Charter of Justice.

Edward Abbott was a soldier, politician, judge-advocate and public servant who served at Parramatta, the Hawkesbury River and Norfolk Island in the colony of New South Wales, now part of present-day Australia. He also served at the settlements of Launceston and Hobart in Van Diemen's Land, which was part of New South Wales until 1825, when Van Diemen's Land became a self-governing colony.

Anthony Fenn Kemp was a soldier, merchant and a deputy judge advocate of the colony of New South Wales. He was one of the key participants in the "Rum Rebellion" that removed William Bligh, the appointed governor of the colony, and established an interim military government. He was later permitted to settle in Van Diemen's Land and became a successful merchant and farmer there.

HMCS Integrity was a cutter built by the Colonial Government of New South Wales in 1804. She was the first vessel ever launched from a New South Wales dockyard and carried goods between the colony's coastal settlements of Norfolk Island, Newcastle, New South Wales, Van Diemen's Land and Port Jackson. In 1804 she took part in a series of voyages to Van Diemen's Land with the aim of founding a colony at Port Dalrymple, the site of the modern settlement of George Town, Tasmania.

Thomas Laycock was an English soldier, explorer, and later businessman, who served in North America during the War of 1812, but is most famous for being the first European to travel overland through the interior of Tasmania.

Ocean was an English merchant ship and whaler built in 1794 at South Shields, England. She performed two voyages as an "extra" ship for the British East India Company (EIC) and later, in 1803, she accompanied HMS Calcutta to Port Phillip. The vessels supported the establishment of a settlement under the leadership of Lt Col David Collins. Calcutta transported convicts, with Ocean serving to transport supplies. When the settlers abandoned Port Phillip, Ocean, in two journeys, relocated the settlers, convicts and marines to the River Derwent in 1804.