Kelly Joe Goodburn (born April 14, 1962) is a former American football punter with a seven-year career in the National Football League. He entered the NFL by signing as a free agent with the Kansas City Chiefs in 1987. He played in Super Bowl XXVI for the Washington Redskins and attended Iowa State University and Emporia State University. Goodburn was raised in the small town of Cushing, Iowa where he led the Eastwood Raiders to an Iowa High School Athletic Association State Championship in 1978.

Iowa City is a city in Johnson County, Iowa, United States. It is the home of the University of Iowa and county seat of Johnson County, at the center of the Iowa City Metropolitan Statistical Area. The U.S. Census Bureau estimated the city's population at 75,130 in 2019, making it the state's fifth-largest city. The metropolitan area, which encompasses Johnson and Washington counties, has a population of over 171,000. The Iowa City Metropolitan Statistical Area (MSA) is also a part of a Combined Statistical Area (CSA) with the Cedar Rapids MSA. This CSA plus two additional counties are known as the Iowa City-Cedar Rapids (ICR) region which collectively has a population of nearly 500,000.

Jack Trice Stadium is a stadium, in Ames, Iowa, United States. It is primarily used for college football and is the home field of the Iowa State Cyclones. It opened on September 20, 1975, with a 17–12 win over Air Force.

The Iowa State Cyclones are the intercollegiate athletic teams that represent Iowa State University, located in Ames. The university is a member of the Big 12 Conference and competes in NCAA Division I, fielding 16 varsity teams in 12 sports.

James Dennis Kelly was an American football, basketball and track and field coach and college athletics administrator. He coached at DePaul University and the University of Minnesota and was head coach of the United States track and field team at the 1956 Summer Olympics. 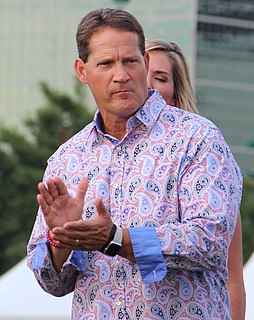 Eugene C. Chizik Jr. is a former American football coach and former player. He was most recently the defensive coordinator at North Carolina from 2015–2016. He served as the head coach of the Auburn football team from 2009 until the end of the 2012 season. Chizik's 2010 Auburn Tigers football team completed a 14–0 season with a victory over Oregon in the BCS National Championship Game, and quarterback Cam Newton won the Heisman Trophy. Chizik played college football at the University of Florida in 1981 for head coach Charley Pell.

The Iowa State Cyclones football program is the intercollegiate football team at Iowa State University in Ames, Iowa. The team is coached by Matt Campbell. The Cyclones compete in the Big 12 Conference, and are a Division I Football Bowl Subdivision (FBS) member of the NCAA. The Cyclones play their home games at Jack Trice Stadium, with a capacity of 61,500. 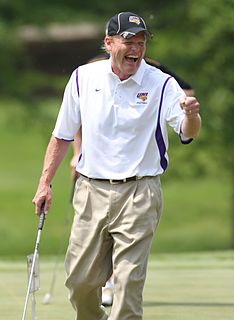 Mark Farley is an American football coach. He is the head coach at the University of Northern Iowa, a position he has held since 2001. Farley started at inside linebacker at Northern Iowa from 1983 to 1985. He led the team in tackles in 1984 and 1985, was named Gateway Football Conference Co-Defensive Player of the Year in 1985, first team all-conference three times, earned honorable mention All-America honors twice and twice named Academic All-American.

Robert Richard Ward was an American football coach and player. He played college football for the Terrapins at the University of Maryland. He is considered, alongside Randy White, as one of the greatest linemen to have ever played for Maryland. Ward is the only player to have been named an Associated Press first-team All-American for both an offensive and defensive position. 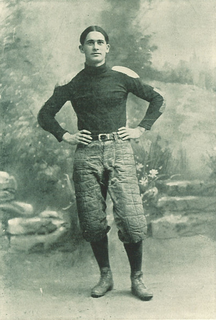 Samuel Clyde Williams was an All-American football player at the University of Iowa, and a football, basketball, and baseball coach and athletic director at Iowa State University. He is a member of both schools' Halls of Fame.

Coaches of the Big 12 Conference bestow the following individual awards at the end of each football season.

Tim Burke is an American born Canadian football coach who was the defensive coordinator for the Toronto Argonauts of the Canadian Football League. Burke was previously the head coach of the CFL's Winnipeg Blue Bombers.

Goodburn is a surname of English origin. People with that name include: