Kenneth W. Mack (born December 14, 1964) is a historian and the inaugural Lawrence D. Biele Professor of Law at Harvard Law School, where he has been a member of the faculty since 2000. He is the author of Representing the Race: The Creation of the Civil Rights Lawyer (2012), and co-editor of The New Black: What Has Changed--and What Has Not--With Race in America (2012).

Kenneth W. Mack grew up in Harrisburg, Pennsylvania, attended Harrisburg High School and graduated from Central Dauphin East High School in 1982. [1] He enrolled at Drexel University, where he received his B.S. in Electrical Engineering in 1987, and was inducted into the Tau Beta Pi engineering honor society. He then worked as an electrical engineer for Bell Laboratories, where he did Integrated circuit design. [2]

In 1999, Mack received an appointment as the Reginald F. Lewis Fellow at Harvard Law School. The following year he joined the Harvard law faculty as a professor. Mack's teaching and scholarship have focused on the legal and constitutional history of American race relations and economic life. He has written and lectured widely in these areas. His work has appeared in the Harvard Law Review, [4] Yale Law Journal, [5] Journal of American History, [6] Law and History Review, [7] and other scholarly outlets. He has also written opinion pieces for TIME, [8] the Washington Post, [9] Boston Globe, [10] The Root, [11] Los Angeles Times, [12] Baltimore Sun, and other popular media. He has appeared on the PBS NewsHour [13] and has been interviewed by a number of media outlets, including CNN, PBS Frontline, Anderson Cooper 360, The New Yorker, The New York Times, and The Los Angeles Times. In 2007, he was awarded the Alphonse Fletcher Sr. Fellowship by the Fletcher Foundation. [14] In 2010, he was awarded an honorary Doctor of Public Service by Harrisburg University of Science and Technology. [15]

Representing the Race: The Creation of the Civil Rights Lawyer (2012) 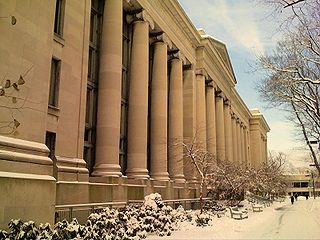 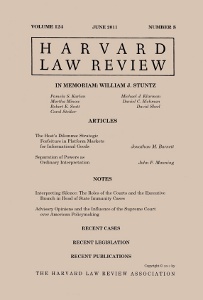 The Harvard Law Review is a law review published by an independent student group at Harvard Law School. According to the Journal Citation Reports, the Harvard Law Review's 2015 impact factor of 4.979 placed the journal first out of 143 journals in the category "Law". It is published monthly from November through June, with the November issue dedicated to covering the previous year's term of the Supreme Court of the United States. The journal also publishes the online-only Harvard Law Review Forum, a rolling journal of scholarly responses to the main journal's content. The law review is one of three honors societies at the law school, along with the Harvard Legal Aid Bureau and the Board of Student Advisors. Students who are selected for more than one of these three organizations may only join one. 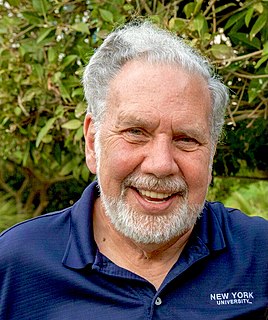 John Edward Sexton is an American lawyer and academic. He presently is the Benjamin F. Butler Professor of Law at New York University, where he teaches at the law school and NYU's undergraduate colleges. Sexton actively writes, including books for both the academic and popular press. He also has created several non-profit educational organizations. Sexton served as the fifteenth President of NYU, from 2002 to 2015. During his time as President, NYU's stature rose dramatically into the rank of the world's top universities; and it became the world's first global network university.He was also one of the highest paid presidents of any American university. Sexton has been called a "transformational" figure in higher education and one of the United States' 10 best college presidents.

Derrick Albert Bell Jr. was an American lawyer, professor, and civil rights activist. In 1971, he became the first tenured African-American professor of law at Harvard Law School, and he is often credited as one of the originators of critical race theory along with Richard Delgado, Charles Lawrence, Mari Matsuda, and Patricia Williams. He was a visiting professor at New York University School of Law from 1991 until his death. He was also a dean of the University of Oregon School of Law. 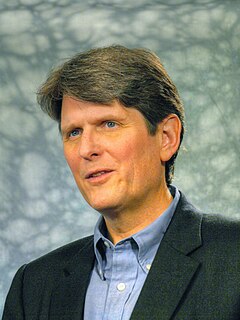 Robert Kinloch "Bob" Massie IV is an American activist, author, and politician who works on issues of global leadership and corporate accountability, social justice, and climate change. He has created or led several organizations, including Ceres, the Global Reporting Initiative, the Investor Network on Climate Risk, and the New Economy Coalition. His early activism centered on opposition to South Africa's apartheid regime, writing the about the relationship between the US and South Africa in the apartheid era. 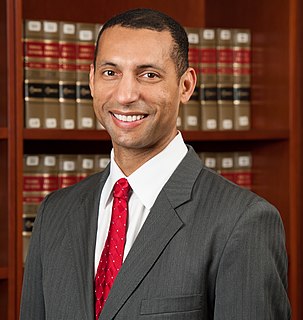 The Harvard Law Record is an independent student-edited newspaper based at Harvard Law School. Founded in 1946, it is the oldest law school newspaper in the United States. 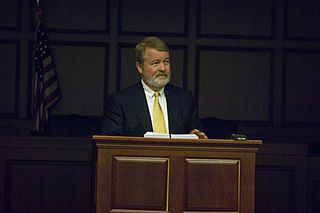 Paul A. Lombardo is an American legal historian known for his work on the legacy of eugenics and sterilization in the United States. He is currently the Bobby Lee Cook Professor of Law at Georgia State University in Atlanta, Georgia.

James Roosevelt III is an attorney, Democratic Party official, and a grandson of U.S. President Franklin D. Roosevelt and Eleanor Roosevelt. As of 2020, he is the co-chair of the Rules and Bylaws Committee of the Democratic National Committee, a position he has held since 1995.

Gabriel Jack Chin is an author, legal scholar, and Professor at the University of California, Davis School of Law. 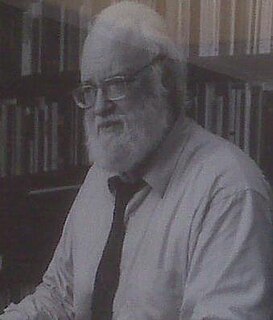 The Tulane Environmental Law Clinic (TELC) is a legal clinic that Tulane Law School has operated since 1989 to offer law students the practical experience of representing real clients in actual legal proceedings under state and federal environmental laws. 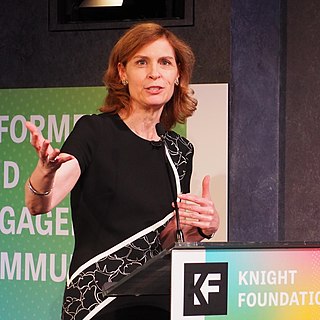 Susan P. Crawford is the John A. Reilly Clinical Professor of Law at Harvard Law School. She served as President Barack Obama's Special Assistant for Science, Technology, and Innovation Policy (2009) and is a columnist for WIRED. She is a former Board Member of ICANN, the founder of OneWebDay, and a legal scholar. Her research focuses on telecommunications and information law.

David Huebner is an international arbitrator based in Southern California. He previously served as the United States Ambassador to New Zealand and Samoa. He was the first openly gay ambassador in the Obama administration and the third openly gay ambassador in United States history. His tenure was marked by significant improvement in bilateral relations, with commentators observing that relations are stronger and closer than they have been in decades. Called an “excellent public face for the United States,” he has been widely praised as a successful Ambassador including for his accessible, inclusive approach, his emphasis on students and future leaders, and the innovative restructuring of his Embassies around social media and other nontraditional tools and approaches of diplomacy. Before being appointed Ambassador he worked as an international lawyer in Los Angeles, Shanghai, and New York City, specializing in international arbitration and mediation. He is licensed as an attorney in California, New York, and in the District of Columbia, and as a solicitor in England and Wales. 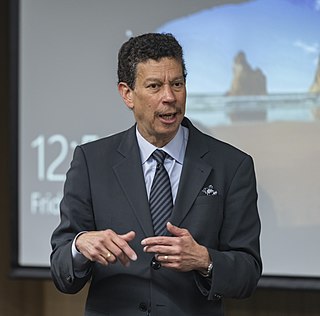 David B. Wilkins is the Lester Kissel Professor of Law and faculty director of the Center on the Legal Profession at Harvard Law School. He is a senior research fellow of the American Bar Foundation, the Harvard Law School's vice dean for global initiatives on the legal profession, and a faculty associate of the Harvard University Edmond J. Safra Foundation Center for Ethics.

Abbe Lyn Smith is an American criminal defense attorney and professor of law at Georgetown University Law Center. Smith is Director of the Criminal Defense and Prisoner Advocacy Clinic and Co-Director of the E. Barrett Prettyman Fellowship Program.

Eduardo M. Peñalver is an American law professor and president-elect of Seattle University. From 2014 until 2021, Peñalver was dean of Cornell Law School. On October 22, 2020, Seattle University announced that it had elected Peñalver to be its next president, effective July 1, 2021.