Killion Munzele Munyama (born 10 July 1961) is a Polish economist, academic lecturer and politician of the Civic Platform (PO) who served as a member of the Polish Parliament from 2011 until 2021. [1]

Munyama was born in Monze, Zambia. Later his family moved to Mumbwa and then to Mkushi where Munyama grew up on a farm. He came to Poland on a scholarship in 1981 to study International Finance. [1] Munyama has stated that initially he planned on returning to Zambia after graduation, as he saw no opportunities for academics in communist Poland. However, after the fall of Communism in Poland he changed his mind as he saw an opportunity for improvement and a "chance to rid (the country) of the grey reality of communism". [2]

Munyama graduated from the Poznań University of Economics in 1987. After graduation he worked for the Zambian government and then returned to Poland in 1994. He obtained his PhD from the Poznań University of Economics in 1994, with a dissertation "IMF Conditionality and the Problem of Structural Adjustment in the Zambian Economy". [3] In 2012 he habilitated, based on his work "Economic Growth and Financial Development in Sub-Saharan African Countries: The Case of IMF Programmes in Kenya, Mozambique, Uganda and Zambia" (Wzrost gospodarczy a rozwój finansowy w Afryce Subsaharyjskiej na przykładzie programów MFW w Kenii, Mozambiku, Ugandzie i Zambii). [4] [5]

Munyama's fields of specialisation are banking and international finance. He has been working at the Poznań University of Economics since obtaining his doctorate and has also taught at the Bydgoszcz Higher School of Economics. [6]

In the 2002 elections Munyama was elected as a delegate to the local council of Grodzisk Wielkopolski County. [7] In 2006 he joined the Civic Platform centre-right party and was elected to the Greater Poland Regional Assembly.

In addition to his role in parliament, Munyama has been serving as member of the Italian delegation to the Parliamentary Assembly of the Council of Europe (PACE) since 2015. As part of the European People's Party group, he is member of the Committee on Migration, Refugees and Displaced Persons (since 2015) and the Sub-Committee on Diasporas and Integration (since 2020). In this capacity, he is the coordinator of PACE’s Parliamentary Network on Diaspora Policies [8] and served as the Assembly's rapporteur on the humanitarian needs and rights of internally displaced persons in Europe in 2018. [9] From 2015 until 2017, he also served on the Sub-Committee on Integration. [10]

He resigned from the Sejm on the 10th of June 2021 after he agreed to work for the European External Action Service. [11]

Munyama describes his views as liberal and pro-market. As a Sejm deputy he has worked on issues of government finance and foreign policy. [2]

In 2018, Munyama joined other black elected representatives and community leaders from across Europe in signing an open letter supporting Italian politician Cécile Kyenge who had been sued for defamation for calling the Italian League party racist. [12]

Munyama is married to Elżbieta, a native of Grodzisk county. They have three children and reside in Karczewo. Munyama is a supporter of the Lech Poznań and the local Dyskobolia Grodzisk Wielkopolski football clubs. [2] 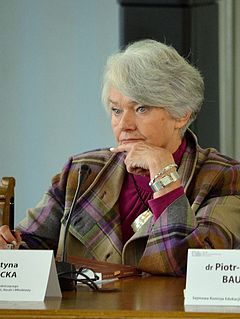 Krystyna Maria Łybacka was a Polish political figure who served in the country's national Parliament (Sejm), since 1991 to 2014 and from October 2001 to May 2004, and was a member of the cabinet, with the title of Minister of National Education.

Marek Jurek is a right-wing politician and a Member of the European Parliament. Since 20 April 2007 he has been the leader of the aspirant party Right of the Republic. Politically, he is most known for being a Marshal of the Sejm in the years 2005–2007.

Bogdan Adam Klich(listen) is a former Minister of National Defence of Poland. Bogdan Klich was interned in 1981 during the martial law set by the communist regime. Until 16 November 2007 he was a Member of the European Parliament (MEP) for the Lesser Poland Voivodeship & Swietokrzyskie Voivodeship with the Civic Platform, part of the European People's Party and sits on the European Parliament's Committee on Foreign Affairs. Senator since November 2011. Lecturer at the Department of European Studies of the Jagiellonian University since 2002. Lecturer at the Cracow University of Economics since the academic year 2013/2014. Author of numerous publications concerning foreign policy and international security.

Tadeusz Iwiński is a Polish politician. He was from 1991 to 2015 a member of the Sejm, elected to represent the Olsztyn electoral district from the list presented by the Democratic Left Alliance. He had earlier (1967–1990) been a long-serving member of the communist Polish United Workers Party.

Adam Stanisław Szejnfeld is a Polish politician. He was elected to the Sejm on 25 September 2005, getting 26,568 votes in 38 Piła district as a candidate from the Civic Platform list. The Poznań University of Economics and Business is a business school in Poland.

Waldemar Włodzimierz Witkowski is a Polish politician, current leader of the Labour Union, and one of the leaders of the coalition Lewica i Demokraci. Since 2006 he is a member of the Greater Poland Regional Assembly. 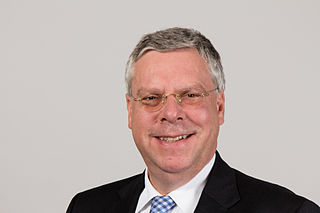 Jürgen Hardt is a German politician of the Christian Democratic Union (CDU) who served as a member of the Bundestag from 2009 until 2021.

Cécile Kashetu Kyenge is an Italian politician and ophthalmologist. She was the Minister for Integration in the 2013–14 Letta Cabinet. From 2014 until 2018, she was a Member of the European Parliament (MEP). Kyenge is of Congolese descent.

Karamba Diaby is a Senegalese-born German chemist and politician of the Social Democratic Party who has been serving as a member of the Bundestag since the 2013 elections.

The Union of European Democrats is a centrist, social-liberal political party in Poland. The party was founded on 12 November 2016 following the merger of the Democratic Party – demokraci.pl structures of the association of European Democrats. The name refers to the tradition of the Democratic Union and the Freedom Union, of which it is the successor. The party is generally characterised as socially liberal, with a moderate Christian democratic wing. The UED strongly emphasizes commitment to the values of the European Union.

Milosav Milojević is a politician in Serbia. He has served in the National Assembly of Serbia since 2014 as a member of the Serbian Progressive Party.

Bartłomiej Piotr Wróblewski is a Polish politician, lecturer and lawyer. He is a member of the Sejm from Law and Justice

Marlena Magdalena Maląg is a Polish politician, teacher, educational activist and former local government official. She is the Minister of Family, Labour and Social Policy, holding office since 15 November 2019.