Knolls Atomic Power Laboratory (KAPL) is an American research and development facility based in Niskayuna, New York and dedicated to the support of the US Naval Nuclear Propulsion Program. [1] KAPL was instituted in 1946 under a contract between General Electric and the United States government. In the 21st century, KAPL is a government-owned, contractor-operated laboratory for the US Department of Energy. KAPL is responsible for the research, design, construction, operation, and maintenance of U.S. nuclear-powered warships. It also manages work on nuclear ships at numerous shipyards across the country.

On May 15, 1946, KAPL began with a contract between General Electric and the U.S. Government to conduct nuclear research and development, including the generation of electricity from nuclear energy. In 1950, the nuclear power plant project was converted to a Naval Nuclear Propulsion project. Several years later Knolls' work joined that of Bettis Atomic Power Laboratory, the Argonne National Laboratory, and others in developing the world's first nuclear-powered submarine, the USS Nautilus on January 21, 1954.

In 1952 and 1953, Jimmy Carter, who would later become a US president, worked at KAPL as an engineer.

The Chart of the Nuclides, containing information such as masses, relative abundances, half-lives, neutron cross sections, and decay properties for more than 3,100 nuclides and 580 isomers was developed at KAPL. This chart is a necessity for students and professionals in nuclear physics, chemistry, engineering, and medicine around the world. The Chart has been compiled, edited and periodically revised by KAPL scientists since 1956.

KAPL operates two sites in New York, the Knolls site in Niskayuna and the Kenneth A. Kesselring site in West Milton. [1] Niskayuna is the primary site for the KAPL, focusing on the design and development of naval propulsion plants and reactor cores. The West Milton site operates land-based prototypes of shipboard reactor plants. This site is also used to train officers and enlisted personnel for the U.S. Navy's fleet of nuclear-powered vessels. KAPL employs more than 2,600 people [1] at these sites and others, mostly shipyards in the states of California, Connecticut, Hawaii, Maine, Virginia, and Washington.

KAPL, as well as Bettis Atomic Power Laboratory, is managed and operated by Fluor Marine Propulsion Corporation, a subsidiary of Fluor Corporation. Previously operated by Bechtel Marine Propulsion Corporation, [2] [3] a wholly owned subsidiary of Bechtel National Incorporated. The previous operating contractor of KAPL was Lockheed Martin. KAPL's original contractor was General Electric. KAPL was one of the first laboratories to conduct research on obtaining usable power from nuclear reactors.

KAPL has one computer listed on the TOP500 list of supercomputers in the world. [4]

The long-running case, Meacham v. Knolls Atomic Power Lab (Docket 06-1505), was filed by 28 of 31 employees dismissed during downsizing at the lab in 1996. The Lab had instituted a voluntary buyout plan but could not attain the desired staff reduction. It developed a matrix to rank employees based on three factors: performance, flexibility and criticality of their jobs, and added points for years of service. All of the dismissed employees were at least 40 years old.

Twenty-eight of those dismissed sued in January 1997 under the Age Discrimination in Employment Act. A jury found for the employees in December 2000, and judgment was rendered in 2002. The Lab appealed to the U.S. Court of Appeals for the 2nd Circuit, but the judgment was upheld in 2004. KAPL appealed again and, while its petition to the US Supreme Court was pending, a related case (Smith v. City of Jackson [Docket 03-1160]) caused the Court in 2006 to vacate the judgment in favor of the defendants (Meacham II).

The 17 remaining plaintiffs (9 had settled their claims) petitioned the US Supreme Court, which ultimately ruled in their favor on technical grounds. The case was remanded to the 2nd Circuit Court, where the original judgment was finally reinstated in 2009 (Meacham III). [6] [7]

The importance of this case stems from its conclusion that employers' actions or policies that appear reasonable and neutral but nevertheless have a disparate impact on older workers are discriminatory in practice. In the majority opinion, Justice Souter wrote, “There is no denying that putting employers to the work of persuading fact-finders that their choices are reasonable makes it harder and costlier to defend,” but that was an issue that Congress should address. [5]

United States naval reactors are nuclear reactors used by the United States Navy aboard certain ships to generate the steam used to produce power for propulsion, electric power, catapulting airplanes in aircraft carriers, and a few more minor uses. Such naval nuclear reactors have a complete power plant associated with them. All U.S. Navy submarines and supercarriers built since 1975 are nuclear-powered by such reactors. There are no commissioned conventional (non-nuclear) submarines or aircraft carriers left in the U.S. Navy, since the last conventional carrier, USS Kitty Hawk, was decommissioned in May 2009. The U.S. Navy had nine nuclear-powered cruisers with such reactors also, but they have since been decommissioned. Reactors are designed by a variety of contractors, then developed and tested at one of several government owned and prime contractor-operated facilities: Bettis Atomic Power Laboratory in West Mifflin, Pennsylvania and its associated Naval Reactors Facility in Idaho, and Knolls Atomic Power Laboratory in Niskayuna, New York and its associated Kesselring site in West Milton, New York, all under the management of the office of Naval Reactors. Sometimes there were full-scale nuclear-powered prototype plants built at the Naval Reactors Facility, Kesselring, and Windsor to test the nuclear plants, which were operated for years to train nuclear-qualified sailors.

The D1G reactor was a prototype naval reactor designed for the United States Navy to provide electricity generation and propulsion on warships. The D1G designation stands for: 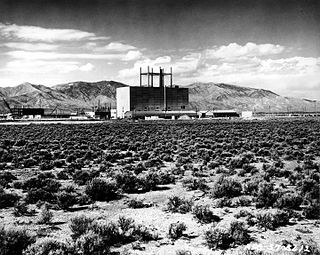 The S1C reactor was a prototype naval reactor designed for the United States Navy to provide electricity generation and propulsion on warships. The S1C designation stands for:

The A4W reactor is a naval reactor used by the United States Navy to propel warships and generate onboard electricity.

The S6G reactor is a naval reactor used by the United States Navy to provide electricity generation and propulsion on Los Angeles-class attack submarines. The S6G designation stands for:

The S8G reactor is a naval reactor used by the United States Navy to provide electricity generation and propulsion on warships. The S8G designation stands for:

Bettis Atomic Power Laboratory is a U.S. Government-owned research and development facility in the Pittsburgh suburb of West Mifflin, Pennsylvania, that works exclusively on the design and development of nuclear power for the U.S. Navy. It was one of the leaders in creating the nuclear navy. 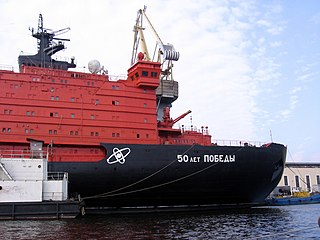 Nuclear marine propulsion is propulsion of a ship or submarine with heat provided by a nuclear power plant. The power plant heats water to produce steam for a turbine used to turn the ship's propeller through a gearbox or through an electric generator and motor. Naval nuclear propulsion is used specifically within naval warships such as supercarriers. A small number of experimental civil nuclear ships have been built.

JASON was a low-power nuclear research reactor installed by the Ministry of Defence at the Royal Naval College in Greenwich, London, now home to the University of Greenwich, to educate and train military and civilian personnel involved in the naval nuclear submarine propulsion.

The Vallecitos Nuclear Center is a nuclear research facility, and the site of a former GE Hitachi Nuclear Energy electricity-generating nuclear power plant in unincorporated Alameda County, California, United States. The facility is approximately 30 miles (48 km) east of San Francisco, under jurisdiction of the US Nuclear Regulatory Commission's Region IV.

The S9G reactor is a naval reactor used by the United States Navy to provide electricity generation and propulsion on Virginia class submarines. The S9G designation stands for:

The Westinghouse Astronuclear Laboratory (WANL) was a division of Westinghouse Electric Corporation. Established in the late 1959 to develop nuclear space propulsion technologies for the government, the lab was located, for most of its history, in the paradoxically small town of "Large" along Pa. Rte 51, about 13 miles (21 km) south of Pittsburgh in Allegheny County, Pennsylvania [USA]. The site is not far from the Bettis Atomic Power Laboratory in West Mifflin, which Westinghouse operated during the same time and later. 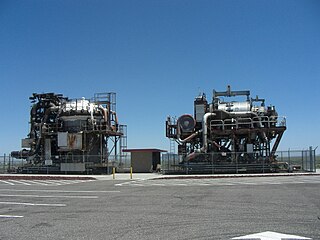 The Aircraft Nuclear Propulsion (ANP) program and the preceding Nuclear Energy for the Propulsion of Aircraft (NEPA) project worked to develop a nuclear propulsion system for aircraft. The United States Army Air Forces initiated Project NEPA on May 28, 1946. NEPA operated until May 1951, when the project was transferred to the joint Atomic Energy Commission (AEC)/USAF ANP. The USAF pursued two different systems for nuclear-powered jet engines, the Direct Air Cycle concept, which was developed by General Electric, and Indirect Air Cycle, which was assigned to Pratt & Whitney. The program was intended to develop and test the Convair X-6, but was cancelled in 1961 before that aircraft was built. The total cost of the program from 1946 to 1961 was about $1 billion.

The S2W reactor was a naval reactor used by the United States Navy to provide electricity generation and propulsion on warships. The S2W designation stands for: 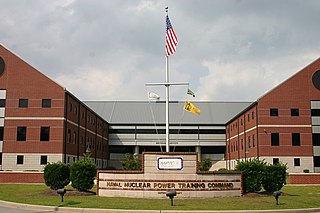 The S1B reactor is a naval reactor used by the United States Navy to provide electricity generation and propulsion on Columbia-class submarines. The S1B designation stands for:

William Rudolph Kanne, also known as W. Rudolph Kanne, was a physicist, inventor and pioneer in the field of gas flow through ionization detectors, a member of the group responsible for the first self-sustained nuclear chain fission reaction at Staggs Field in Chicago, and participated in the Manhattan Project at the Chicago, Oak Ridge and Hanford sites.