Last updated January 09, 2023
Not to be confused with Knut Næss.
Norwegian footballer and coach

Osnes was born in Nordfjordeid and made his senior debut for his local team Eid Idrettslag  [ nb ] as a 16-year-old in 1938. [2] After the end of the war, Osnes moved to Oslo to study teaching, and also joined Lyn after a successful trial. He became part of the Lyn team that won the Norwegian Championship (cup) in 1945 and 1946, and later went on to score five goals in six matches for Norway, also becoming the first-ever player from Sogn og Fjordane county to represent the national team. [2] Poor eyesight forced him to retire from top-level football in 1950, and he returned home to Nordfjordeid where he worked several years as a gym teacher while playing for his local club. [2]

Osnes moved back to Oslo in the early 1960s where he got a teaching job, and was also employed as a youth team coach for his old club Lyn, before coaching Vålerengen's senior team in 1962. In 1967, Osnes was appointed head coach at Lyn, and guided the club to a cup title in his first season. The following season, Lyn won the league and cup double, and also went on an excellent run in the Cup Winners Cup, where they reached the quarter-finals before being narrowly defeated by Barcelona. [2]

Having lost star player Harald Berg, Lyn struggled in 1969, and Osnes stepped down at the end of the season. He later coached Aalesund and Strømsgodset. Osnes died in August 2015, aged 93. [3]

Molde Fotballklubb is a professional football club based in Molde, Norway, that competes in Eliteserien, the top flight of Norwegian football. Founded on 19 June 1911, the club was originally known as International and changed its name to Molde in 1915. Molde are five-time league champions and five-time Norwegian Cup winners, and have finished second in the league a further nine times. Molde is one of only two Norwegian clubs to have participated in the UEFA Champions League.

Nils Arne Eggen was a Norwegian footballer, manager and teacher from Orkdal. Eggen was closely tied to Rosenborg, the club he managed for 23 years between 1970 and 2010. He is Norway's most successful club manager throughout history, having won the Norwegian top division fifteen times and the Norwegian Football Cup six times as a manager. Eggen's tactical emphasis was on playing 4-3-3 and attacking football and his way of playing football has frequently been cited as an inspiration among players, coaches and clubs alike, both domestically and abroad. In his native Trøndelag, Eggen is revered and widely regarded as the greatest and most influential sports person in the region, even eclipsing Olympic champions such as Hjalmar Andersen and Petter Northug.

Lyn 1896 Fotballklubb is a Norwegian football club and a department of the sports club Ski- og Fotballklubben Lyn based in Oslo, whose members also participate in Nordic skiing and orienteering. Until 2010, SFK Lyn had two football departments, one professional section and one amateur section. After the professional football department, FK Lyn, was bankrupted in 2010, the fans decided to support the amateur department, Lyn Fotball, instead. With the help of some of the old FK Lyn players, Lyn Fotball has won three consecutive promotions, and are playing in the 3. divisjon. The team plays its home matches at Bislett Stadium, and the head coach is currently Jan Halvor Halvorsen.

The Norwegian Football Cup is the main knockout cup competition in Norwegian football. It is run by the Football Association of Norway and has been contested since 1902, making it the oldest football tournament in the country. The tournament is commonly known as Cupen, NM or NM Cup, an acronym formed from Norgesmesterskap. These terms are used to describe both the men's and women's competitions. The equivalent competition for women's teams is the Norwegian Women's Football Cup.

Øyvind Leonhardsen is a Norwegian former professional footballer who played as a midfielder. He retired after the 2007 season, ending a career with nine years in English football at clubs Wimbledon, Liverpool, Tottenham Hotspur, and Aston Villa, and in Norway he played for Molde, Rosenborg, Lyn, and Strømsgodset. Between 1990 and 2003 he made 86 appearances for the Norway national team scoring 19 goals.

Gunnar Halle is a Norwegian football manager and former player who played as a right back. He is the current assistant coach of Strømmen. Halle is best known for his playing spells at Oldham Athletic and Leeds United, followed by his brief managerial spell at Lyn Oslo. 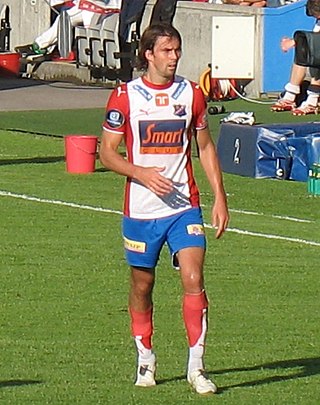 Jo Tessem is a Norwegian footballer who currently plays as a midfielder for Wessex League Premier Division side Hythe & Dibden. Tessem is known for his versatility as a player, being able to play anywhere on the pitch. He plays mostly as an attacking midfielder or as forward.

Tor Thodesen is a Norwegian football coach. In 2006, he was awarded the "Coach of the year" award by his colleagues, for his work in Sandefjord.

Ski- og Fotballklubben Lyn is a Norwegian alliance sports club from Nordre Aker, Oslo. It has two sections; for association football and Nordic skiing. Until 2010 they had a third section, for top-level association football, named FK Lyn. In the skiing is also embedded orienteering, triathlon, and track and field. Lyn has previously also been playing bandy.

Caroline Graham Hansen is a Norwegian professional footballer who plays as a winger for Spanish Liga F club FC Barcelona and the Norway women's national team. 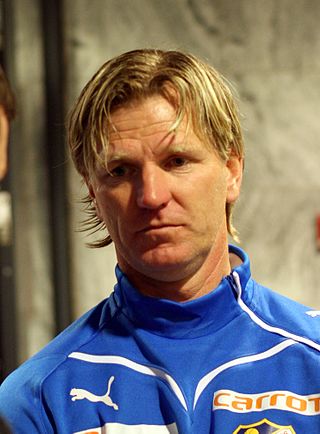 Kent Roger Bergersen, nicknamed Kenta, is a Norwegian football coach and former footballer. He is currently the assistant manager of Norway. 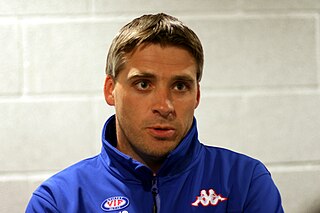 Knut Aga is a retired Norwegian football striker and defender.