A kytoon or kite balloon is a tethered aircraft which obtains some of its lift dynamically as a heavier-than-air kite and the rest aerostatically as a lighter-than-air balloon. [1] The word is a portmanteau of kite and balloon. 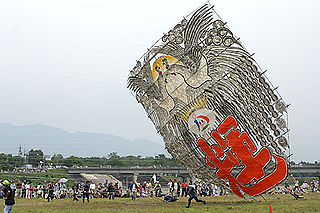 A kite is a tethered heavier-than-air craft with wing surfaces that react against the air to create lift and drag. A kite consists of wings, tethers and anchors. Kites often have a bridle and tail to guide the face of the kite so the wind can lift it. Some kite designs don’t need a bridle; box kites can have a single attachment point. A kite may have fixed or moving anchors that can balance the kite. One technical definition is that a kite is “a collection of tether-coupled wing sets“.

Lighter than air refers to materials that are buoyant in air because they have average densities lower than that of air. Dry air has a density of about 1.29 g/L at standard conditions for temperature and pressure (STP) and an average molecular mass of 28.97 g/mol.

A portmanteau or portmanteau word is a linguistic blend of words, in which parts of multiple words or their phones (sounds) are combined into a new word, as in smog, coined by blending smoke and fog, or motel, from motor and hotel. In linguistics, a portmanteau is defined as a single morph that represents two or more morphemes.

The primary advantage of a kytoon is that it remains in a reasonably stable position above the tether point, irrespective of the strength of wind, whereas ordinary balloons and kites are less stable. [1]

The kytoon has been used for many purposes both civil and military.

In 1919, a handbook was published giving extensive details to support the kite balloon crafts being used in the military. Described is the first kite balloon made in 1893 by Captains Parseval and Sigsfeld at the Berlin works of the Prussian Balloon Battalion; theirs was the "predecessor of the Drachen balloon." "This was the first real kite balloon flying like a kite with a fairly constant angle and direction relative to the wind and remained practically unchanged until the beginning of the war in 1914-1918." [2] A hybrid kite-balloon was patented by Domina Jalbert [3] in 1944 as patent US2431938 and later became known as the kytoon. Jalbert furthered his attention on kite balloons also with another patent filed on August 31, 1945 titled "Kite Balloon"

The Allsopp Helikite is a modern helium-filled example. 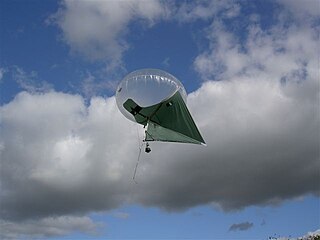 The Helikite is a type of kite-balloon or kytoon designed by Sandy Allsopp in the UK in 1993. The Helikite comprises a combination of a helium balloon and a kite to form a single, aerodynamically sound tethered aircraft, that exploits both wind and helium for its lift.

In low or gusty winds a kite can nose-dive, losing a large amount of height even if it recovers. Because a kytoon is buoyant it does not nose-dive and remains in position even in relatively still air. [3]

Applications of the kytoon have included: 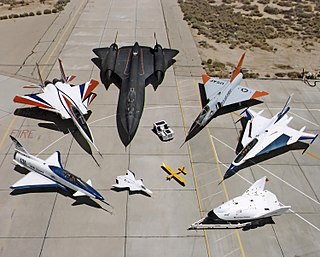 An aircraft is a machine that is able to fly by gaining support from the air. It counters the force of gravity by using either static lift or by using the dynamic lift of an airfoil, or in a few cases the downward thrust from jet engines. Common examples of aircraft include airplanes, helicopters, airships, gliders, and hot air balloons. 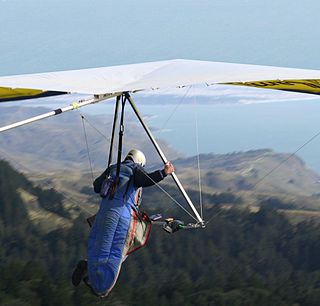 Unpowered aircraft can remain airborne for a significant period of time without onboard propulsion. They can be classified as fixed-wing gliders, lighter-than-air balloons and tethered kites. This requires a trajectory that is not merely a vertical descent such as a parachute. In the case of kites, lift is obtained by tethering to a fixed or moving object, perhaps another kite, to obtain a flow of wind over the lifting surfaces. In the case of balloons, lift is obtained through inherent buoyancy and the balloon may or may not be tethered. Free balloon flight has little directional control. Gliding aircraft include sailplanes, hang gliders, and paragliders that have full directional control in free flight. 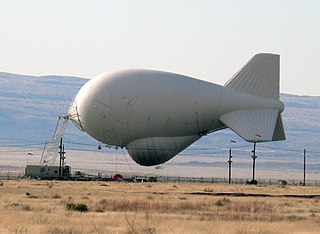 An aerostat is a lighter than air aircraft that gains its lift through the use of a buoyant gas. Aerostats include unpowered balloons and powered airships. A balloon may be free-flying or tethered. The average density of the craft is lower than the density of atmospheric air, because its main component is one or more gasbags, a lightweight skin containing a lifting gas to provide buoyancy, to which other components such as a gondola containing equipment or people are attached. Especially with airships, the gasbags are often protected by an outer envelope.

A parafoil is a nonrigid (textile) airfoil with an aerodynamic cell structure which is inflated by the wind. Ram-air inflation forces the parafoil into a classic wing cross-section. Parafoils are most commonly constructed out of ripstop nylon.

An airborne wind turbine is a design concept for a wind turbine with a rotor supported in the air without a tower, thus benefiting from more mechanical and aerodynamic options, the higher velocity and persistence of wind at high altitudes, while avoiding the expense of tower construction, or the need for slip rings or yaw mechanism. An electrical generator may be on the ground or airborne. Challenges include safely suspending and maintaining turbines hundreds of meters off the ground in high winds and storms, transferring the harvested and/or generated power back to earth, and interference with aviation.

High-altitude wind power (HAWP) is the harnessing of the power of winds high in the sky by use of tether and cable technology. An atlas of the high-altitude wind power resource has been prepared for all points on Earth. A similar atlas of global assessment was developed at Joby Energy. The results were presented at the first annual Airborne Wind Energy Conference held at Stanford University by Airborne Wind Energy Consortium.

A kite balloon is a tethered balloon which is aerodynamically optimised for windy conditions by making it directionally stable and by minimising aerodynamic resistance to the wind, or drag. It typically comprises a streamlined envelope with stabilising features and a harness or yoke connecting it to the main tether.

A tethered, moored or captiveballoon is a balloon that is restrained by one or more tethers attached to the ground and so it cannot float freely. The base of the tether is wound around the drum of a winch, which may be fixed or mounted on a vehicle, and is used to raise and lower the balloon. 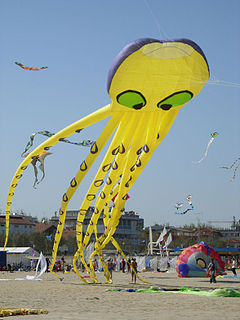 The ram-air inflatable single-line kite is one of the few modern inventions in the world of kite design. Although Francis Rogallo's early kite patents had ram-air members in the claims, Domina Jalbert's parafoil ram-air wing, patented in 1944, emphatically changed the kite airscape for inflatable kites.

The kite can be used for many applications. Air kites, water kites, bi-media kites, fluid kites, gas kites, kytoons, paravanes, soil kites, solid kites, and plasma kites have niche applications that are furthering the interests of humans in both peace and conflict. Non-human-made kites have applications; some spiders make use of kiting. 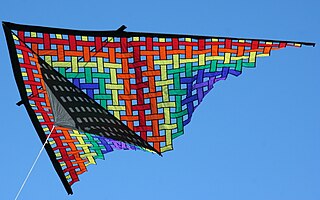 Kites are given mooring by many methods. Watercraft and aircraft traditionally have the term "mooring" applied to making the watercraft or aircraft fast to some external object. The kite has two parts: wing and kite line; the kite essentially needs mooring to either a mobile or fixed object in order to develop the tension in the kite line that gets converted to lift and drag to have the kite fly in its media. Governments frequently have regulations about the mooring of atmospheric balloons and atmospheric kites that are operated in governed airspace. The United States Federal Aviation Regulation Part 101 regulates the mooring of qualified kites and balloons in airspace that the U.S. governs; those regulations do not apply to ungoverned spaces and special ambient flying media.

Unpowered flight is the ability to stay airborne for a period of time without using any power source. There are several types of unpowered flight. Some have been exploited by nature, others by man, and some by both.

Crosswind kite power is power derived from a class of airborne wind-energy conversion systems or crosswind kite power systems (CWKPS) characterized by a kite system that has energy-harvesting parts that fly transverse to the direction of the ambient wind, i.e., to crosswind mode; sometimes the entire wing set and tether set is flown in crosswind mode. These systems at many scales from toy to power-grid-feeding sizes may be used as high-altitude wind power (HAWP) devices or low-altitude wind power (LAWP) devices without having to use towers. Flexible wings or rigid wings may be used in the kite system. A tethered wing, flying in crosswind at many times wind speed, harvests wind power from an area that is many times exceeding the wing’s own area. Crosswind kite power systems have some advantages over conventional wind turbines: access to more powerful and stable wind resource, high capacity factor, capability for deployment on and offshore at comparable costs, and no need for a tower. Additionally, the wings of the CWKPS may vary in aerodynamic efficiency; the movement of crosswinding tethered wings is sometimes compared with the outer parts of conventional wind turbine blades. However, a conventional traverse-to-wind rotating blade set carried aloft in a kite-power system has the blade set cutting to crosswind and is a form of crosswind kite power. Miles L. Loyd furthered studies on crosswind kite power systems in his work "Crosswind Kite Power" in 1980. Some believe that crosswind kite power was introduced by P. Payne and C. McCutchen in their patent No. 3,987,987, filed in 1975, however, crosswind kite power was used far before such patent, e.g., in target kites for war-target practice where the crosswinding power permitted high speeds to give practice to gunners.