La Molina is a ski resort in the Pyrenees mountains of northeastern Spain, in the municipality of Alp in the comarca of Cerdanya in Girona, Catalonia. Together with Masella, it forms the Alp 2500 resort.

It is the site of the first ski lift in Spain, opened on 28 February 1943, and Spain's first ski school, which opened a year later. [1]

It is served by a RENFE / Rodalies train station. [2]

On 23 March 2016 the resort was the finishing point for the third stage of the road cycling race, the Volta a Catalunya, which was won by Dan Martin of Etixx–Quick-Step. [4]

Alp 2500 is a ski resort in La Cerdanya, Catalonia, in the Pyrenees mountains of northeastern Spain. It includes the two towns of La Molina and Masella, whose two respective ski areas united to form this resort. The nearest main town is Alp. The resort of Masella serves the mountain of La Tosa. 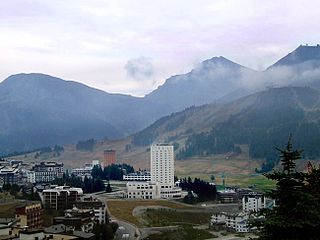 Mariano Cañardo Lacasta was a Spanish professional road racing cyclist. He won a record seven editions of the Volta a Catalunya in the 1920s and 1930s, as well as four Spanish national championship titles and one Tour de France stage win. Born in Olite, Navarra, his nickname was the Catalan of Olite.

Madonna di Campiglio is a village and a ski resort in northeast Italy. It is a frazione of the comune of Pinzolo. The village lies in the Val Rendena at an elevation of 1,522 m (4,993 ft) above sea level, and has approximately 1,000 inhabitants.

Vallnord is a ski/snowboard resort in the Pyrenees mountains in the country of Andorra, close to the border with Spain at Tor, Pallars.

Bromont, montagne d'expériences is an alpine ski resort located in Bromont, Quebec on the slopes of Mont Brome, Mont Spruce and Pic du Chevreuil. As of the 2009-2010 season, it was the largest centre in North America for illuminated alpine skiing. It is one of the four major ski centres in the Eastern Townships east of Montreal, the other three being Ski Mont Sutton, Ski Mont Orford and Owl's Head. It is about 45 minutes from Montreal. 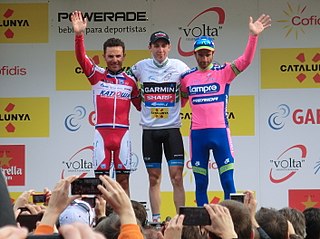 The 2013 Volta a Catalunya was the 93rd running of the Volta a Catalunya cycling stage race. It started on 18 March in Calella, ended on 24 March in Barcelona, and consisted of seven stages. It was the fifth race of the 2013 UCI World Tour season.

Barcelona hopes to host the Winter Olympic Games in 2026. Barcelona is the second largest city of Spain and the capital of the autonomous community of Catalonia. Parts of the Games would also take place at La Molina, a mountain resort in the Pyrenees. A bid was considered for the 2022 Olympics, but mayor Xavier Trias concluded that the city was not yet prepared after being told so by the IOC, stating that one "must concentrate its efforts and commitment to work to reach the Olympic target by 2026." Barcelona previously hosted the 1992 Summer Olympics.

The 2014 Volta a Catalunya was the 94th running of the Volta a Catalunya cycling stage race. It started on 24 March in Calella and ended on 30 March in Barcelona, and consisted of seven stages. It was the fifth race of the 2014 UCI World Tour season.

The 2015 Volta a Catalunya was the 95th edition of the Volta a Catalunya stage race. It took place from 23 to 29 March and was the fifth race of the 2015 UCI World Tour. Defending champion Joaquim Rodríguez was scheduled to defend his title, but was pulled from the event days before it was due to start citing a stomach virus. The race was won by Richie Porte, his second race win of the season, with Alejandro Valverde in second and Domenico Pozzovivo in third.

The 2016 Volta a Catalunya was a road cycling stage race that took place in Catalonia, Spain, from 21 to 27 March. It was the fifth race of the 2016 UCI World Tour and the 96th edition of the Volta a Catalunya.

The 2019 Volta a Catalunya was a road cycling stage race, that took place between 25 and 31 March 2019 in Spain. It was the 99th edition of Volta a Catalunya and the ninth race of the 2019 UCI World Tour. It was won by Miguel Ángel López of Astana.