Lauren Jeska (born 5 September 1974) [1] is a British former fell runner from Lancaster. Jeska, a trans woman, [2] was convicted of the attempted murder of Ralph Knibbs, HR manager for UK Athletics after Knibbs investigated Jeska's eligibility to compete as a woman.

Jeska was born to parents Pauline and Graham Jameson. [3] Graham Jameson is a mathematician at Lancaster University and both parents are active in Lancaster Baptist Church. She had two younger brothers who were twins, one of whom had mental health issues and later took his own life. [3]

Jeska went to Lancaster Royal Grammar School where she was a cross-country runner. She went on to Oxford University, where she studied physics, gaining a first. [3] Jeska began studying for a doctorate at Oxford but dropped out of the course. She later attended Leeds University, gaining a master's in gender studies. [4] [5]

In Easter 1998 Jeska came out to her parents as a trans woman, and had a gonadectomy in 2000. She went on to study gender studies at Leeds University. While at Leeds, she took up fell-running, finding immediate success, winning the Blackshaw Head fell race in 2008. [6] She later joined Todmorden Harriers athletics club, and went on to win the 2010 Three Shires Fell Race, the 2011 Liverpool Half Marathon, the 2010, 2011, and 2012 English, and 2012 British Fell Running Championships. [2] After moving to Wales she joined Aberystwyth Athletics Club.

In June 2015, UK Athletics told Jeska that she would be required to provide blood tests to prove that her hormone levels were within normal female range, as there was no documentation for Jeska's 2000 castration. [3] Jeska took exception as she felt it would reveal her transgender status publicly. She failed to provide the samples required. [7]

In March 2016 she attacked Ralph Knibbs, a former professional rugby player and UK Athletics HR manager, with a knife, at Alexander Stadium, in Birmingham. Jeska stabbed Knibbs in the head and neck, resulting in a 2 cm hole with blood pumping out. She claimed she feared UK Athletics would strip her of her records and her eligibility to compete against female athletes. [2] [7] Jeska also attacked Tim Begley and Kevan Taylor, employees of UKA who came to Knibbs's aid. [7]

In September 2016, she pleaded guilty to attempted murder, plus two counts of assault occasioning actual bodily harm on Begley and Taylor, and weapons charges for knife possession. [8]

On 15 November 2016, she was scheduled to be detained in hospital under the Mental Health Act 1983, but the hearing was adjourned for a month pending further psychiatric reports. [9] Jeska was found during these investigations to have autism. [10] [11]

In March 2017, Jeska was jailed for 18 years for the crimes, [12] which severed nerves in Knibbs's body, leaving him with restricted movement, difficulty eating, and limited vision in both eyes.

Jeska is currently[ when? ] serving her sentence at HM Prison Foston Hall in Derbyshire. [13] [ failed verification ] Her racing results were declared null and void. [7] 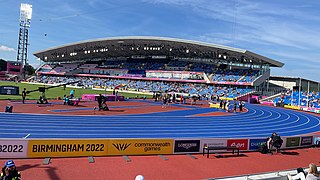 Michael Curtis Brewer is a convicted sex offender and former British music teacher and choral conductor. He was the founding musical director of the National Youth Choirs of Great Britain and had been Director of Music for Chetham's School of Music in the 1980s and early 1990s. He was appointed an Officer of the Order of the British Empire in 1995, but was stripped of the honour in 2013 following his conviction on five counts of indecent assault against a girl who had been one of his pupils. He was jailed for six years.

HM Prison Styal is a Closed Category prison for female adults and young offenders in Styal, Cheshire, England. The prison is operated by Her Majesty's Prison Service.

The Swiss City Marathon is a marathon in Lucerne, first held in 2007. A half marathon and a "try-out marathon" (Schnuppermarathon) of 13 km are also part of the programme.

HM Prison Foston Hall is a women's closed category prison and Young Offenders Institution, located in the village of Foston in Derbyshire, England. The prison is operated by Her Majesty's Prison Service.

Stephen Timms, the Labour MP for East Ham, was stabbed on 14 May 2010 during his constituency surgery by Roshonara Choudhry, a 21-year-old British former student and an Islamic extremist, in an attempt to kill him. She was found guilty of attempted murder and jailed for life with a minimum term of 15 years. Choudhry was the first Al-Qaeda sympathiser to attempt an assassination in Britain.

Lucy Meadows was a transgender teacher from Accrington in the United Kingdom. She committed suicide in March 2013 after the decision of her employers to allow her to return to work after gender reassignment surgery was covered in the national press.

Events from 2016 in England

Jacky Fleming is a cartoonist, whose work first became known through her pre-internet social activism postcards.

Events from 2017 in England

The first English Fell Running Championships were held in the 1986 season, based on results in various fell races of different lengths over the year.

Events from 1974 in England

Amy-Leanne Stringfellow was a former soldier who was fatally beaten and stabbed in June 2020 by her ex-boyfriend while he was on bail for assaulting her previously. Amy-Leanne lived in Doncaster and was 26 when she died.

Louise Porton is a British double murderer who came to public attention in 2019 when she was convicted of murdering her two children as they "got in the way" of her sex life. Between 2 January and 1 February 2018, she repeatedly attacked and then killed her two daughters, who were aged three and 17 months respectively. Suspicion soon fell on her when she was noted to show little concern at the unexplained deaths of her two children only 18 days apart, and a police investigation found that she had made a number of incriminating internet searches at the time attempting to find out how to successfully murder her children and cover up her crimes. At trial, she was convicted by unanimous jury decision and sentenced to a minimum of 32 years imprisonment. She is imprisoned at HM Prison Foston Hall.