The film was in production in late 1987. It was released on July 6, 1988, in the United States and grossed over $20 million at the North American box office. It was distributed by 20th Century Fox.

Southern California teenager Les Anderson (Corey Haim) tries to get his driver's license in order to impress his crush, Mercedes Lane (Heather Graham). He fails the knowledge portion of the exam, but inadvertently causes a computer surge. Les' failing marks are thought to be irretrievable, but the Department of Motor Vehicles lets him pass the exam after comparing him to his twin sister's high marks. He eventually passes the road test, but his real test scores are finally retrieved and his license is revoked.

Les tries concealing the truth from his parents, but his mother finds out the truth and grounds him for two weeks. Les made plans to drive his grandfather's prized 1972 Cadillac Sedan de Ville prior and decides to sneak away anyway for a joyride with Mercedes. Mercedes and Les get drunk and accidentally cave in the roof of the car after dancing on it. Mercedes passes out; Les panics and goes to his best friend Dean's (Corey Feldman) house to have him fix the dent in the car's hood. Dean persuades Les to continue the joyride along with their friend Charles (Michael Manasseri), but are unaware Les still does not have his license. The three put Mercedes in the trunk of the car and continue their night on the town, causing even more damage to the Cadillac. Meanwhile, Les' pregnant mother wakes up her husband late in the night announcing she is in labor.

The next day, Les drops off Charles and Dean at their homes. Mercedes wakes up and believes that the night prior was a dream. Les drops her off at her house where they share a kiss. Les gets in trouble with his father after returning home with the damaged Cadillac. Les' mother is still in labor, but since the car's transmission will not shift into drive he is forced to drive his family to the hospital in reverse. Les' mother is taken into the hospital but a crane fails outside and a falling steel girder crushes the Cadillac, much to the shock of Les and his father.

The family tries to explain the state of the Cadillac to Les' grandfather, but Les' grandfather laughs it off as he reveals he has severely damaged Les' father's own car, a BMW, in an accident. Les' father gives the BMW to him and jokingly tells him to take good care of it. Although Les thanks his father, he has changed his mind and doesn't want it anymore. Mercedes pulls up in a white Volkswagen Golf Cabriolet and picks up Les, who gets in the driver's seat and drives away with her.

On review aggregation website Rotten Tomatoes, License to Drive has a "rotten" score of 24% based on 25 reviews with an average rating of 3.6/10. [2] On Metacritic, the film had an average score of 36 out of 100 based on 9 critics, indicating "Generally unfavorable reviews." [3] Chicago Sun-Times critic Roger Ebert gave the film two and a half out of four stars and described the film as "more-than-passable summer entertainment, especially when it identifies with the yearnings of its young heroes to get behind the wheel." He said the first half of the film was "very funny" but the second half was "much more predictable". [4]

Songs played in the film, but not on the soundtrack

License to Drive was first released on VHS by CBS/Fox Video in late 1988. It was notable that some VHS versions of the film replaced the Nia Peeples song "Trouble" with "New Sensation" by INXS.

In an interview on Larry King Live , on March 10, 2010, the day of Corey Haim's death, Corey Feldman revealed that he and Haim had been developing a sequel, titled License to Fly, an idea initiated by Haim. Feldman also stated that there were tentative plans for a trilogy, with a third installment called License to Dive. [5]

Fox and Davis are developing a female-driven reboot based on the film. [6] [7] 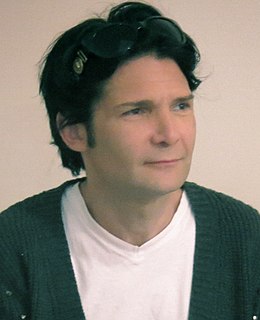 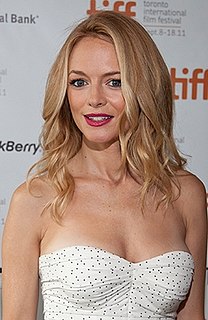 Heather Joan Graham is an American actress, director, and writer. After appearing in television commercials, her first starring role in a feature film came with the teen comedy License to Drive (1988), followed by the critically acclaimed film Drugstore Cowboy (1989). She then played supporting roles in films such as Six Degrees of Separation (1993) and Swingers (1996), and on the television series Twin Peaks (1991). She gained critical praise for her role as "Rollergirl" in the film Boogie Nights (1997).This led to major roles in Bowfinger (1999) and Austin Powers: The Spy Who Shagged Me (1999).

Corey Ian Haim was a Canadian actor. He starred in a number of 1980s films, such as Lucas, Silver Bullet, Murphy's Romance, License to Drive and Dream a Little Dream. His role alongside Corey Feldman in The Lost Boys made him a household name. Known as The Two Coreys, the duo became 1980s icons and appeared together in seven movies, later starring in the A&E American reality show The Two Coreys. 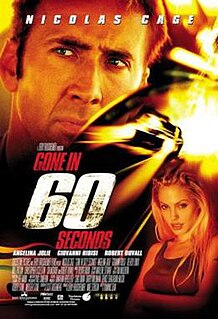 Gone in 60 Seconds is a 2000 American action heist film starring Nicolas Cage, Angelina Jolie, Giovanni Ribisi, Christopher Eccleston, Robert Duvall, Vinnie Jones, Delroy Lindo, Chi McBride and Will Patton. The film was directed by Dominic Sena, written by Scott Rosenberg, and produced by Jerry Bruckheimer. The film is a loose remake of the 1974 H. B. Halicki film of the same name. 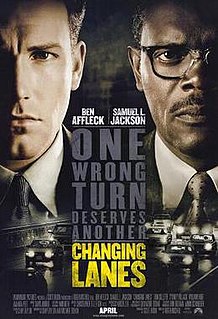 Changing Lanes is a 2002 American drama thriller film directed by Roger Michell and starring Ben Affleck and Samuel L. Jackson. The film follows a successful, young Wall Street lawyer (Affleck) who accidentally crashes his car into a vehicle driven by a middle-aged, recovering alcoholic insurance salesman (Jackson). After the lawyer leaves the scene of the accident, the two men try to get back at each other, engaging in a variety of immoral and illegal actions that end up having a major impact on each man's life.

Bushwhacked is a 1995 American adventure comedy, film starring Daniel Stern, Jon Polito, Anthony Heald and Brad Sullivan. Directed by Greg Beeman, it was his last theatrical film before he moved on to direct television films for Disney Channel beginning in 1997. This also marked Sullivan's last theatrical film appearance before his retirement in 2000 and death in 2008. 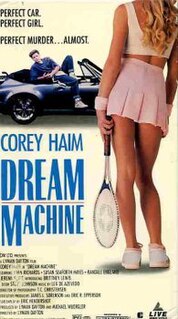 Dream Machine is a 1991 American comedy thriller film, starring Corey Haim, Brittney Lewis and Randall England. The screenplay was written by Eric Hendershot and based on the old urban legend of a wife selling off a Porsche for a suspiciously low price to get revenge on a cheating husband. The film was released direct-to-video in 1991.

Dream a Little Dream is a popular 1989 American fantasy-romantic comedy film directed by Marc Rocco and starring Corey Feldman, Corey Haim, Meredith Salenger, Jason Robards, Piper Laurie and Harry Dean Stanton. It was filmed in Wilmington, North Carolina. This was the third film featuring The Two Coreys. A direct to video sequel, Dream a Little Dream 2, was released in 1994.

Busted is a 1997 comedy film, starring Corey Feldman, Corey Haim and Elliott Gould. The film marked Corey Feldman's directorial debut. Due to his frequent absences and drug use during filming, Corey Haim was eventually fired by director Corey Feldman. Feldman later said it was one of the hardest and most painful things he ever did.

Neil Tolkin is a Canadian screenwriter and film director from Montreal. He attended Westmount High School and Dawson College and McGill University.

Jamison Newlander is an American actor. He starred in the 1987 horror film The Lost Boys, playing vampire hunter Alan Frog.

Lost Boys: The Tribe is a 2008 American comedy horror film directed by P. J. Pesce, which serves as a stand-alone sequel to the 1987 film, The Lost Boys. The film stars Tad Hilgenbrink, Angus Sutherland, Autumn Reeser and Corey Feldman.

Lala Cassandra Sloatman is an American model, actress and costumer. Her uncle was musician Frank Zappa; her cousins are Ahmet, Diva, Moon and Dweezil Zappa. She is frequently billed by her first name only, and sometimes as Lala Zappa. 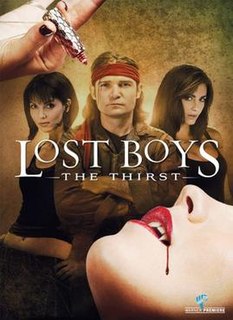 Lost Boys: The Thirst is a 2010 American comedy horror action film directed by Dario Piana and stars Corey Feldman, Casey B. Dolan, Tanit Phoenix and Jamison Newlander. It is a sequel to Lost Boys: The Tribe (2008) and the third and final film of The Lost Boys trilogy. 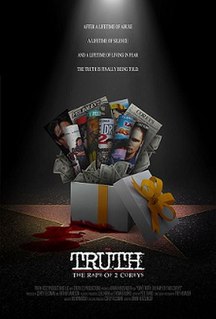 My Truth: The Rape of 2 Coreys is a 2020 American documentary film directed by Brian Herzlinger and produced by Corey Feldman and Arthur Jameson. Feldman also stars in the film. The film showcases allegations that Feldman and fellow actor Corey Haim were sexually abused as children by several men connected to the entertainment industry.