This is a list of medieval statutes and other laws issued under royal authority in the Kingdom of England before the development of Parliament. These instruments are not considered to be Acts of Parliament, which can be found instead at the List of Acts of the Parliament of England.

Magna Carta Libertatum, commonly called Magna Carta, is a royal charter of rights agreed to by King John of England at Runnymede, near Windsor, on 15 June 1215. First drafted by Archbishop of Canterbury Stephen Langton to make peace between the unpopular king and a group of rebel barons, it promised the protection of church rights, protection for the barons from illegal imprisonment, access to swift justice, and limitations on feudal payments to the Crown, to be implemented through a council of 25 barons. Neither side stood behind their commitments, and the charter was annulled by Pope Innocent III, leading to the First Barons' War.

The Bill of Rights 1689, also known as the Bill of Rights 1688, is a landmark Act in the constitutional law of England that sets out certain basic civil rights and clarifies who would be next to inherit the Crown. It received the Royal Assent on 16 December 1689 and is a restatement in statutory form of the Declaration of Right presented by the Convention Parliament to William III and Mary II in February 1689, inviting them to become joint sovereigns of England. The Bill of Rights lays down limits on the powers of the monarch and sets out the rights of Parliament, including the requirement for regular parliaments, free elections, and freedom of speech in Parliament. It sets out certain rights of individuals including the prohibition of cruel and unusual punishment and confirmed that "Protestants may have arms for their defence suitable to their conditions and as allowed by law". It also includes no right of taxation without Parliament’s agreement. Furthermore, the Bill of Rights described and condemned several misdeeds of James II of England.

In British and American common law, quo warranto is a prerogative writ requiring the person to whom it is directed to show what authority they have for exercising some right, power, or franchise they claim to hold.

In the 1760s William Blackstone described the Fundamental Laws of England in Commentaries on the Laws of England, Book the First – Chapter the First : Of the Absolute Rights of Individuals as "the absolute rights of every Englishman" and traced their basis and evolution as follows:

The Statute of Merton or Provisions of Merton, sometimes also known as the Ancient Statute of Merton, was a statute passed by the Parliament of England in 1235 during the reign of Henry III. It is considered to be the first English statute, and is printed as the first statute in The Statutes of the Realm. Containing 11 chapters, the terms of the statute were agreed at Merton between Henry and the barons of England in 1235. It was another instance, along with Magna Carta twenty years previously, of the struggle between the barons and the king to limit the latter's rights.

A free warren—often simply warren—is a type of franchise or privilege conveyed by a sovereign in medieval England to an English subject, promising to hold them harmless for killing game of certain species within a stipulated area, usually a wood or small forest. The sovereign involved might be either the monarch or a marcher lord.

Magna Carta Hiberniae 1216 is an issue of the English Magna Carta in Ireland. King Henry III of England's Charter of 1216 was issued for Ireland on 12 November 1216 but not transmitted to Ireland until February 1217; it secured rights for the Anglo-Norman magnates in Ireland. The Charter was reissued in 1217 as in England. It was in effect the application of Magna Carta to Ireland, with appropriate substitutions. 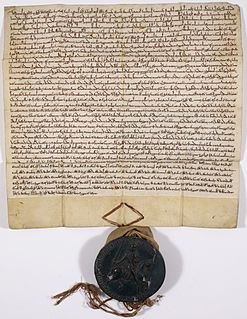 The Charter of the Forest of 1217 is a charter that re-established for free men rights of access to the royal forest that had been eroded by William the Conqueror and his heirs. Many of its provisions were in force for centuries afterwards. It was originally sealed in England by the young King Henry III, acting under the regency of William Marshall, 1st Earl of Pembroke. It was in many ways a companion document to Magna Carta. The Charter redressed some applications of the Anglo-Norman Forest Law that had been extended and abused by William Rufus.

In English law, the assize of darrein presentment was an action brought to determine who was the last patron to appoint to a vacant church benefice - and thus who could next appoint - when the plaintiff complained that he was deforced or unlawfully deprived of the right to appoint by the defendant.

The Imperial Laws Application Act 1988 is an important part of New Zealand's uncodified constitution. The Act applies certain enactments of the Parliament of the United Kingdom and its predecessors, rulings of the Judicial Committee of the Privy Council and English common law into New Zealand law.

The phrase law of the land is a legal term, equivalent to the Latin lex terrae, or legem terrae in the accusative case. It refers to all of the laws in force within a country or region, including statute law and case-made law.

The Assize of Arms of 1252, also called the Ordinance of 1252, was a proclamation of King Henry III of England concerning the enforcement of the Assize of Arms of 1181, and the appointment of constables to summon men to arms, quell breaches of the peace, and to deliver offenders to the sheriff.