Luke Anthony Procter (born 24 June 1988) [1] is an English cricketer. He is a left-handed batsman and right-arm medium-fast bowler who captains Northamptonshire in first-class and ListA cricket.

Born in Oldham,Greater Manchester, [1] Procter played for Cumberland in the Minor Counties Trophy in 2007.

He first represented Lancashire in the Second XI Championship in 2006,made his List A debut in September 2009,against Warwickshire,opening the batting with Tom Smith,Procter scored 2 runs and suffered a broken thumb. Procter graduated from Lancashire's cricket academy,and after impressing for the Second XI in 2009 (the year he was granted a scholarship) he signed his first professional contract with the club. [2] [3]

In March 2010 Lancashire went to the Caribbean to prepare for the upcoming English season. In a friendly match against Yorkshire Procter suffered a broken left hand while fielding,preventing him from playing cricket for several weeks. [4] He went on to make his County Championship debut in May that year against Warwickshire;he scored 13 runs in the first innings and bowled a single over but he was replaced by fast-bowler James Anderson for the second innings. [5] Procter played one further County Championship match that year in September; [6] he made scores of 19 and 32 and took his maiden first-class wicket,that of Nick Compton leg before wicket. [7]

Procter's first County Championship match of 2011 was against Sussex [6] in which he scored his first half-century. His innings of 89 runs from 170 balls [8] included five sixes off the bowling of spinner Monty Panesar. [9] He scored one further first-class fifty in 2011 and that year he played seven matches in the County Championship,which was more than he anticipated. Scoring 366 runs,Procter's average of 40.66 was the best for Lancashire in 2011. [10] In the last match of the season,Lancashire won the County Championship for the first time since 1950 when they shared the title. [11]

He replaced Will Young as captain for the 2023 County Championship and One-Day Cup.

Derbyshire County Cricket Club in 2005 was the cricket season when the English club Derbyshire had been playing for one hundred and thirty-five years. They reached the semi-final in the Cheltenham and Gloucester Trophy. In the County Championship,they finished ninth in the second division and in the National League,they finished sixth in the second division. They were eliminated at group level in the North section of the Twenty20 Cup.

Sussex County Cricket Club is the oldest of eighteen first-class county clubs within the domestic cricket structure of England and Wales. It represents the historic county of Sussex. Its limited overs team is called the Sussex Sharks. The club was founded in 1839 as a successor to the various Sussex county cricket teams,including the old Brighton Cricket Club,which had been representative of the county of Sussex as a whole since the 1720s. The club has always held first-class status. Sussex have competed in the County Championship since the official start of the competition in 1890 and have played in every top-level domestic cricket competition in England.

Rikki Clarke is a retired English cricketer,who last played for Surrey. He was educated at Broadwater School and then Godalming College. Clarke began his career as a professional cricketer with Surrey in 2000,making his list A debut in 2001 and First Class debut in 2002,and the following year made his One Day International debut for England;later in 2003 he played his first Test match. Between 2003 and 2006 he played two Tests,both against Bangladesh and 20 ODIs.

Mudhsuden Singh "Monty" Panesar is a former English international cricketer. A left-arm spinner,Panesar made his Test cricket debut in 2006 against India in Nagpur and One Day International debut for England in 2007. In English county cricket,he last played for Northamptonshire in 2016,and has previously played for Northamptonshire until 2009,Sussex from 2010 to 2013 and Essex from 2013 to 2015. He has also played for the Lions in South Africa.

The 2006 English cricket season was the 107th in which the County Championship had been an official competition. It included home international series for England against Sri Lanka and Pakistan. England came off a winter with more Test losses than wins,for the first time since 2002-03,but still attained their best series result in India since 1985. The One Day International series against Pakistan and India both ended in losses.

Adil Usman Rashid is an English cricketer who plays for England in One Day International (ODI) and Twenty20 International (T20I) cricket,and previously played for the Test team. In domestic cricket,he represents Yorkshire,and has played in multiple Twenty20 leagues,including for Punjab Kings in the Indian Premier League. 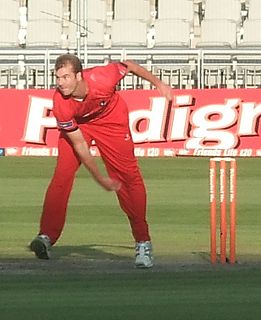 Thomas Christopher Smith is a former English cricketer who played for Lancashire County Cricket Club. He had also been a member of the England Academy team. In 2008,he played for Leicestershire on loan because he was unable to break into Lancashire's first team. He is an all-rounder,bowling right-arm medium and batting left-handed. At the start of the 2009 season,Smith was promoted to open the batting,having previously batted in the lower order,and secured his place there. In 2011,the year Lancashire won the County Championship for the first time since 1950,Smith became the first Lancashire player to score a century and take four wickets in the same one-day match. In 2011/12 Smith played for the Matabeleland Tuskers in Zimbabwe as an overseas player in the domestic twenty20 competition.

Gehan Dixon Mendis is an English former cricketer who was an opening batsman for Sussex and Lancashire between 1974 and 1993. He was part of the Lancashire team that won the 1990 Benson &Hedges Cup and 1990 NatWest Trophy. Mendis scored over 21,000 runs in his first-class career.

Karl Robert Brown is an English cricketer. He is a right-handed batsman and a right-arm medium-pace bowler who played for Lancashire until 2018. Brown made his first-class debut in 2006 and his list A debut the following year. Between 2005 and 2007,Brown played 15 Youth One Day Internationals. In 2011,Brown scored his maiden centuries in first-class and list A cricket and debuted for Lancashire in twenty20s.

Gareth David Cross is an English cricketer who plays for Clifton Cricket Club in the Greater Manchester Cricket League. He is a right-handed batsman and wicket-keeper who occasionally bowls right arm medium-fast. He played for Lancashire from 2005 until his release in 2013,and the following year signed for Derbyshire. In 2015 he returned to Clifton as professional having earlier come through their junior ranks.

Somerset County Cricket Club competed in four domestic competitions during the 2009 English cricket season:the first division of the County Championship,the Friends Provident Trophy,the first division of the NatWest Pro40 League and the Twenty20 Cup. Through their performance in the Twenty20 Cup,the team qualified for the Champions League Twenty20. They enjoyed a successful season,but fell short of winning any competitions,prompting Director of Cricket Brian Rose to say "We've had enough of being cricket's nearly men."

Naved Arif Gondal is a former Pakistani cricketer. He is a left-handed batsman who bowls left-arm medium-fast. He played first-class cricket for Sussex in the English county championship. Arif was given a life ban for match fixing in 2014.

The 2021 County Championship was the 121st cricket County Championship season in England and Wales. For the first phase of the tournament,the teams were split into three groups of six,with each side playing ten matches. The top two teams from each group progressed into Division One for the second phase of the competition,with the other teams progressing to Divisions Two and Three. The team that finished top of Division One became the county champions;and the top two teams from Division One contested a five-day match at Lord's for the Bob Willis Trophy. On 17 December 2020,the England and Wales Cricket Board (ECB) confirmed all the fixtures for the tournament. After completion of the group stage on 14 July 2021,the ECB confirmed the fixtures for the division stage on 22 July 2021. 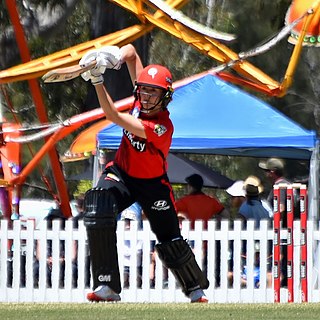 Evelyn Jones is an English cricketer who currently captains Central Sparks,as well as playing for Warwickshire,Birmingham Phoenix and Melbourne Renegades. She plays primarily as a left-handed opening batter,as well as bowling left-arm medium. She has previously played for Shropshire,Staffordshire and Lancashire,as well as for Loughborough Lightning and Lancashire Thunder in the Women's Cricket Super League and New Zealand side Canterbury Magicians.