Mairehau High School is a state co-educational secondary school in Christchurch, New Zealand. The school takes its name from the suburb Mairehau having been adopted in 1916 as a compliment to Mrs Mairehau Hutton whose father, Arthur Gravenor Rhodes, owned considerable property in the area and was a notable benefactor to the district. [3]

The school is located at the northeast end of the suburb, near to Shirley, thus forming a coeducation alternative to Shirley Boys' High School, and Avonside Girls' High School. Mairehau High School opened on 1 February 1961, having been constructed on the advice of the Department of Statistics.

The names and colours of the Mairehau waka groups are:

Whangārei is the northernmost city in New Zealand and the regional capital of Northland Region. It is part of the Whangarei District, a local body created in 1989 from the former Whangarei City, Whangarei County and Hikurangi Town councils, to administer both the city proper and its hinterland. The city population was estimated to be 54,400 in June 2020, an increase from 47,000 in 2001.

Mairehau is a suburb of Christchurch, New Zealand. It is located four kilometres north of the city centre, close to the edge of the urbanised central city area. It is home to a secondary school, Mairehau High School. Much new development is being carried out on the northern edge of Mairehau.

Khandallah is a suburb of Wellington, the capital city of New Zealand. It is located 4 kilometres (2.5 mi) northeast of the city centre, on hills overlooking Wellington Harbour.

Ōtāhuhu is a suburb of Auckland, New Zealand – 13 kilometres (8.1 mi) to the southeast of the CBD, on a narrow isthmus between an arm of the Manukau Harbour to the west and the Tamaki River estuary to the east. The isthmus is the narrowest connection between the North Auckland Peninsula and the rest of the North Island, being only some 1,200 metres (3,900 ft) wide at its narrowest point, between the Otahuhu Creek and the Mangere Inlet. As the southernmost suburb of the former Auckland City, it is considered part of South Auckland.

Aorere College is a New Zealand co-educational state secondary school that was established in 1964 in the Auckland suburb of Papatoetoe. The current principal of the college is Leanne Webb. As of March 2021, there are approximately 1674 students, and around 150 staff at Aorere College.

Alfriston College is a secondary school in the suburb of Alfriston in Auckland, New Zealand.

Samuel Marsden Collegiate School is located in the Wellington suburb of Karori in New Zealand. It has a socio-economic decile of 10 and provides private year 1 to 13 education for girls, with a co-educational Preschool. Its exam results rank consistently in the top schools in New Zealand. Samuel Marsden Collegiate School students complete the New Zealand National Certificate of Educational Achievement (NCEA) but the school also offers Cambridge A-Level exams in certain subjects. 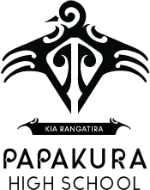 Papakura High School (PHS) is a co-educational state secondary school based in the Auckland suburb of Papakura in New Zealand, catering for students from Year 9 to Year 13. 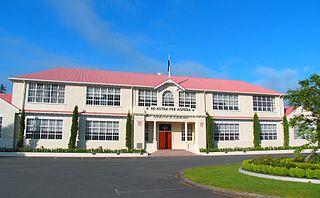 Rotorua Boys' High School is a state school educating boys from Year 9 to Year 13. It is situated just outside the Rotorua CBD at the intersection of Old Taupo Road and Pukuatua Street in Rotorua, New Zealand. 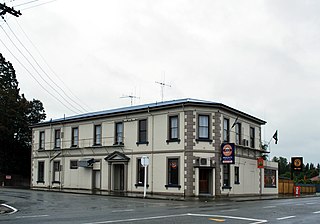 Winchester is a small town in the South-Canterbury region of New Zealand's South Island. Winchester is 6.9 kilometres north of Temuka and 51 kilometres southwest of Ashburton.

Te Wharekura o Ruatoki is a school at Ruatoki in the eastern Bay of Plenty, New Zealand, serving children in years 1 through 13. It was established as Ruatoki Native School in 1896 after a visit by Richard Seddon and James Carroll. In 1978 it became New Zealand’s first officially bilingual school.