Mapusa is a town in North Goa, India. It is situated 13 km north of the capital Panaji. The town is the headquarters of Bardez Taluka. It is located on the main highway NH-17, linking Mumbai to Kochi.

In Portuguese, the town is known as Mapuça.

Mapusa is a small town clustered around the Mount (Alto). The name Mapusa is thought to be derived from the Konkani word for a 'measure' - 'map' and the phrase fill up - 'sa'. Ancient Goan agrarian community had a well established Gaunkari or Community Farming System, where villages formed associations, worked on community land and shared profits. Market day was a major event, with goods brought in from every district to one central area. Mapusa has thus remained a prominent market center for many centuries.

Mapusa is close to one of the main centres of Goa's tourism industry. Mapusa's proximity to many beaches in the north of Goa makes it a suitable base during the tourist season (November to April). Because it is a mainly commercial town (for locals) with a large resident population, Mapusa has only a limited number of hotels and accommodation. Mapusa comes alive on Friday, the traditional market day also known as Mapusa Friday Market. People from surrounding villages and towns come to Mapusa to sell their wares. This fair has a lot of local flavour (unlike some other tourist-oriented fairs or markets) and specialises in agricultural produce, vegetables, locally grown fruit, spices, clothes and even plants (mainly during the monsoon planting season).

Every Friday, the Mapusa Market bulges at the seams, with seemingly every square inch of space occupied by sellers with only just enough room for the prospective buyers, the alleys between the regular stalls being occupied with temporary mats and boards. From lottery tickets displayed in great swathes to barber shops, the bazaar caters for almost every requirement imaginable. There is the fish street, dried fish of all possible varieties and whole fresh fish from baby shark and squid to the ubiquitous bangda (mackerel). Fresh fruit and vegetables are gathered together and beautifully displayed, from huge sweet potatoes, and pumpkins and the local shiny red brown Moira bananas to the tiny fresh beans and other pulses.

Mapusa, however, does not have too many tourist sites. There are a few colonial era Municipal building on the Altinho hill, but it is a fairly small town with mostly modern buildings spread around the slopes of Altinho.

The most famous local shrine is Shree Dev Bodgeshwar Sansthan of Lord Bodgeshwar, located on the outskirts of the town in the middle of some rice fields, which is beautifully lit up at night and draws thousands of devotees for its annual Jatra.

The Church of Our Lady of Miracles, founded in 1594 and rebuilt several times since, located around 600m east of the Municipal Gardens, is famous more for its annual festival than for its architecture. It was built by the Portuguese on the site of an old Hindu temple, and thus the Hindu community still holds the site as sacred. On the sixteenth day after Easter, the church's annual feast day is celebrated here by both Hindus and Christians – one of the best examples of the way in which Hinduism and Christianity often coexist merrily in Goa.

Maruti Temple, in the centre of town, is a small, pastel-coloured Maruti temple that was built in the 1840s at a site where Hanuman was covertly worshipped during more oppressive periods of Portuguese rule. After temples had been destroyed by the Portuguese, devotees placed a picture of Hanuman at the fireworks shop that stood here, and arrived cloaked in secrecy to perform pujas (prayers). In April 1843 the picture was replaced by a silver idol and an increasing number of worshippers began to gather here. Eventually the business community of Mapusa gathered enough funds to acquire the shop, and the temple was built in its place. The intricate carvings at the doorway of the temple are the work of local artisans.

The Mapusa Market gathers Goan traders as well as merchants from adjacent states for goods such as spices, toddy and home-grown goods. [3] For example, there are four varieties of locally growned bananas sold in this market and other varieties imported from Karnataka. There is also a part of the market where the traders specialise in repairing ustensiles such as blenders and food mixers for the preparation of spices. 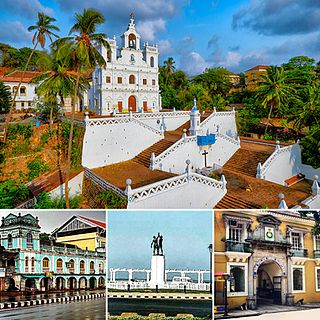 Panaji is the capital of the Indian state of Goa and the headquarters of North Goa district. It lies on the banks of the Mandovi River estuary in the Tiswadi sub-district (taluka). With a population of 114,759 in the metropolitan area, Panaji is Goa's largest urban agglomeration, ahead of Margao and Vasco da Gama.

Ponda, also known as Fonda, is a city and a municipal council in the north Goa district of Goa, India. Located in the central area of Goa, Ponda lies 28 km southeast of Panaji, the capital of Goa and 17 km northeast of Margao, the district headquarters. Ponda is also known as "Antruz Mahal" because of the presence of numerous famous temples and rich cultural heritage. The industrial center of the state, Ponda is home to many large factories and industrial estates, and is Goa's fastest-growing city.

Margao is the commercial capital of the Indian state of Goa. It stands on banks of the Sal river and is the administrative headquarters of Salcete sub-district and South Goa district. It is Goa's second largest city by population after Vasco.

Bicholim, pronounced, also known as Divchal and Dicholi, is a city and a municipal council in North Goa district in the state of Goa, India. It is the headquarters of the Concelho (district) of Bicholim, one of seven that make up the Novas Conquistas, territories added to Goa comparatively latter than the first three of the Velhas Conquistas. The town is located about 30 kilometres from the capital Panjim. It is in the mining heartland of Goa.

North Goa is one of the two districts that make up the state of Goa in India. The district has an area of 1736 km², and is bounded by Sindhudurg district of Maharashtra state to the north and by Belgaum district of Karnataka to the east, by South Goa district to the south, and by the Arabian Sea to the west. 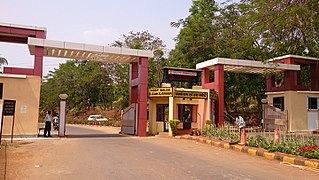 Konkani people are an ethno-linguistic community who inhabit and originate the Konkan region of south-western India, and speak various dialects of the Konkani language. They also reside in Kanara, Malabar, Goa and Damaon, Maharashtra and SouthernGujarat

St. Britto's, Goa, is on the west coast of India in the headquarters town of Mapusa. It was founded in 1946 and is run by the Society of Jesus (Jesuits). It is all-boys and includes grades one through ten. In 2017 all 142 graduates passed the secondary exam.

Aldona is a Village in the Taluka of Bardez and one of the prominent villages of the State of Goa. It is known for its scenic setting and creatively-built houses. Travel-writer Anuradha Goyal quotes villagers as believing that it is "the most beautiful village in the world" and notes that "a lot of literary giants" choose to live in Aldona.

Chiplunpronunciation (help·info) is a city in Ratnagiri district in the state of Maharashtra, India. It is the financial and commercial Hub of Ratnagiri, and the headquarters of Chiplun taluka. It is about 320 km south of Mumbai in the Konkan region of Maharashtra, on the Mumbai–Goa highway (NH-66). It has a long history and a strong cultural background. The name Chiplun means "the abode of Lord Parshuram." Recent decades have seen much industrial development in it and its and surrounding areas.

Guirim is a census town in North Goa district in the Indian state of Goa. For administrative purposes, however, it is considered to be a village, and has a village panchayat, which is the local administration of a village in parts of India. Guirim is located on the outskirts of the North Goa main commercial town of Mapusa. It is the last village along the Panjim-Mapuca highway that one encounters prior to reaching Mapuca. 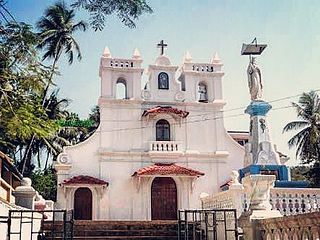 Pernem is a city and a municipal council in North Goa district in the Indian state of Goa.

Loutolim or LoutulimLottli pronounced:[lɔːʈlĩː], Portuguese: Loutulim) is a large village of South Goa district in the state of Goa, India. It is an important settlement in the Salcete sub-district.

Mapusa Friday Market is a traditional, regional weekly market in Mapusa, North Goa and a major tourist attraction. It is located within and around the Mapusa Municipal market area.

Cunchelim or Kucheli [] is a village in Bardez taluka, in the district of North Goa, in the state of Goa in India.

Assagao is a village in Bardez, Goa, India located about 4 kilometres west of Mapusa. Assagao is known as the Land of Flowers as well as several other nicknames – “Goa’s South Extension”, ‘Artist’s village’, “The Beverly Hills of Goa”, “Goa’s Tuscany”. It is one of the beautiful villages of Goa. The village is surrounded by hills. From Mapusa town, the road u-turns uphill and, while descending the pass in the small plateau, splits into two parallel roads: one which proceeds straight along the St. Cajetan Church, Assagao Union High School to Anjuna and the other, which passes by Pallottine Seminary and Panchayat Office straight to Badem. The popular beaches of Anjuna and Vagator are to the west of Assagao.

Simalwara is a census town in Dungarpur district in the Indian state of Rajasthan. It is the administrative headquarters for Simalwara Tehsil. 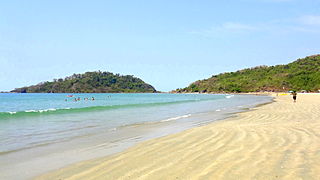 Goa is a state on the southwestern coast of India within the region known as the Konkan, and geographically separated from the Deccan highlands by the Western Ghats. It is surrounded by the Indian states of Maharashtra to the north and Karnataka to the east and south, with the Arabian Sea forming its western coast. It is India's smallest state by area and the fourth-smallest by population. Goa has the highest GDP per capita among all Indian states, two and a half times that of the country. It was ranked the best-placed state by the Eleventh Finance Commission for its infrastructure and ranked on top for the best quality of life in India by the National Commission on Population based on the 12 Indicators.