The Santosh Trophy is an association football knock-out competition contested by the regional state associations and government institutions under the All India Football Federation (AIFF), the sport's governing body in India. Before the start of the first national club league, the National Football League, in 1996, the Santosh Trophy was considered the top domestic championship in India. [1] Many players who have represented India internationally played and gained accolades while playing in the Santosh Trophy. [2] The tournament is held every year with 31 teams who are divided into groups and who must qualify for the tournament proper through the preliminary round. [3] The current champions are Services, who won their 6th title during the 2018–19 edition.

The Santosh Trophy was started in 1941 after the then president of the Indian Football Association, West Bengal's football association, Sir Manmatha Nath Roy Chowdhary of Santosh and Sir Satish Chandra Chowdhury donated the trophy. [1] At the time of the first tournament, India lacked a proper main championship for football teams. The other two main competitions at the time were the Durand Cup, Rovers Cup, and the IFA Shield and they were played by club sides. [1] In 1990, in an attempt to bring through more younger players, the All India Football Federation made the Santosh Trophy into an under-23 competition. This move only lasted for three seasons before the tournament was reverted to a senior competition. [1]

During his time as the head coach of India, Bob Houghton called for the tournament to be discontinued and that it was a waste of time and talent. [1] He was more aggressive against the tournament after India striker Sunil Chhetri injured himself in the 2009 Santosh Trophy and had to miss the Nehru Cup. [2] As a result, national team players were not allowed to participate in the tournament. This was also eventually reverted. [1] In 2013 it was revealed that the AIFF decided that I-League players would not be allowed to participate in the Santosh Trophy. [5]

The following teams have participated in the tournament and are still states, union territories, or organizations.

The All India Football Federation, simply known as the AIFF, is the governing body of association football in India. Formed in 1937, the federation was one of the founding members of the Asian Football Confederation, the overseer of football in Asia.

The National Football League (NFL) was a league competition featuring football clubs from India. Founded in 1996 through the All India Football Federation (AIFF), the NFL was the first football league in India to be organized on a national scale. The AIFF then added a second division in 1997 and a third division was soon added by the governing body in 2006. The NFL was eventually replaced by the I-League for the 2007–08 season in order to professionalize the sport in India. 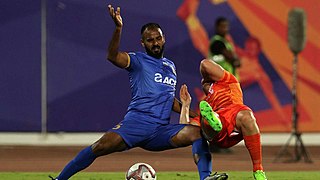 Anwar Ali is an Indian footballer, currently playing for Punjab in the I-League as a centre back.

Inder Singh is an Indian former football player and captain, manager and administrator. He played for Leaders Club (Jalandhar), JCT Mills and the Indian national team as a forward. He began his senior professional career with Leaders Club in 1962 and moved to JCT Mills in 1974. Playing for Punjab in the Santosh Trophy, he finished the 1974–75 tournament with 23 goals, a record that still stands. He was included in the Asian All Stars XI team in 1967 and 1968. He retired as a player in 1985.

The 2010 Santosh Trophy was the 64th edition of the tournament. All matches of the tournament from the Quarter-finals stage were played at the Yuva Bharati Krirangan in Kolkata. The tournament began on 16 July 2010 and ended on 8 August 2010 when the final match was played between Bengal and Punjab. 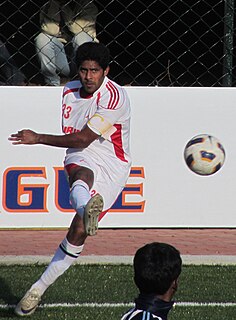 Manjit Singh is an Indian football player who plays for Bharat FC in the I-League in India as a striker.

The 2015 Santosh Trophy is the 69th edition of the Santosh Trophy, the main state competition in Indian football. 33 teams in total from around India entered the competition. Only 10 teams competed in the competition proper after going through the qualifiers. The tournament proper began on 1 March and will conclude with the final on 15 March. 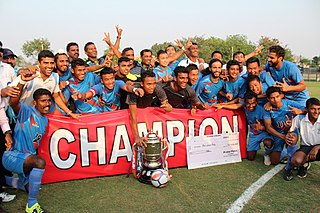 The 2017–18 Santosh Trophy was the 72nd edition of the Santosh Trophy, the premier competition in India for teams representing their regional and state football associations. The competition began with qualifiers on 8 January 2018 and concluded with the final on 1 April 2018. Kerala won the competition, their sixth championship, by defeating West Bengal during the final in penalties 4–2.

The 2018 Santosh Trophy Final was a match between Kerala and West Bengal, played on 1 April 2018, at the Salt Lake Stadium in Kolkata, West Bengal. The match was a culmination of the 2017–18 Santosh Trophy, the 72nd edition of the football competition contested by regional state associations and government institutions under the All India Football Federation. Kerala won the match after defeating West Bengal in a penalty shootout 4–2. In regulation time, the match ended 1–1 while during extra time, a goal each found both sides tied 2–2 after 120 minutes.

The 2019 Super Cup was the second edition of the Super Cup and 40th season of the main club knockout football competition in India. The competition is sponsored by Hero MotoCorp and is officially known as the Hero Super Cup. The competition began with the qualifiers on 15 March 2019 at Kalinga Stadium in Bhubaneshwar and was concluded with the final on 13 April 2019. Bengaluru FC were the defending champions, but lost to Chennai City F.C. in the quarter-finals. FC Goa won the title by defeating Chennaiyin FC 2–1 in the final.

Bidyashagar Singh is an Indian professional footballer who plays as a Forward for East Bengal in the I-League.

The 2019–20 Hero Santosh Trophy qualifiers will be the qualifying round for the 74th edition of the Santosh Trophy, the premier competition in India for teams representing their regional and state football associations.