The Mumbai Football League is organised by Mumbai District Football Association as a ladder-based competition involving a total of six divisions and over 300 teams, 12 of which forms the Women's Football League.

The Mumbai Women's Football League - one of four tournaments of its kind across the country - remains unchanged in terms of format for the 2010–11 season.

The one aspect that has been modified for this season is the start dates for the league. The Women's division used to be one of the first to kick-off in the MFL however the dates for the current season have been pushed forward (awaiting official announcement from the MDFA) to facilitate preparation for the district and national camps.

The division boasts the creme of Women's football in the city apart from many international players from the current and past national teams. [1] [2]

The Elite Division is the topmost division in MFL organised by Mumbai District Football Association. Eliminating the much-criticised championship play-offs from previous editions, the Mumbai District Football Association (MDFA) has restructured the Elite Division 2010–11 season into a classic league format with the teams contesting for the championship and the two dreaded relegation spots.

The new structure brings an end to the exemption enjoyed by the i-League teams in previous seasons, meaning that Air India, Mumbai FC and the newly promoted ONGC will play all teams in the round-robin fixtures.

The exodus of Mahindra United from Mumbai's football scene following Mahindra United u-19's success in winning the Super Division 2009-10 has surprisingly resulted in no teams being promoted to the top flight.

Speculation that New Installed Club- Dodsal FC Will replace the place which is vacant due to Mumbai United 's withdrawal. Maharashtra State Police and Companeroes SC are newly promoted Clubs whereas Akbar Travels were relegated.

All the teams in the division will be divided into four or more groups and shall play a preliminary phase of round-robin games. The top two teams from each group will advance to the post-season playoffs. The points and goals scored in the preliminary phase will not be carried forward to the next round . The team standing first and second after the completion of the round-robin playoff league shall be declared the winner and runner-up and will be promoted to the Elite Division (Season 2011-12). The teams in last place in each group after the completion of the preliminary league will be demoted to the Division One (Season 2011-12).

The brand new Division One structure decided by the Mumbai District Football Association (MDFA) brings together the teams in Division One and Two from previous seasons, comprising a total of forty three teams.

Bringing together the erstwhile Division Three and Four, the Mumbai District Football Association (MDFA) announced the new Division Two, to be contested by seventy two teams.

The decision to revamp the structure of the Mumbai Football League by the Mumbai District Football Association (MDFA) brings together two of the biggest divisions – Five and Six – to form the new MFL Division Three, comprising a mammoth 125 registered teams and counting. This Year -149 Teams will participate in This Third Division

A tournament is a competition involving 4 or more teams, or a large number of competitors, all participating in a sport or game. More specifically, the term may be used in either of two overlapping senses: 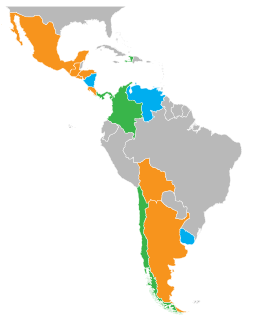 The Apertura[apeɾˈtuɾa] and Clausura[klawˈsuɾa] tournaments is a split season format for Spanish-speaking sports leagues. It is a relatively recent innovation for many Latin American football leagues in which the traditional association football season from August to May is divided in two sections per season, each with its own champion. Apertura and Clausura are the Spanish words for "opening" and "closing". In French-speaking Haiti, these are known as the Ouverture and the Fermeture, while in English-speaking Belize, they are respectively the Opening and Closing seasons. When used in the United States and Canada, they are known as the Spring and Fall seasons.

The Ranji Trophy is a domestic first-class cricket championship played in India between multiple teams representing regional and state cricket associations. The competition currently consists of 38 teams, with all 28 states in India and four of the eight union territories having at least one representation. The competition is named after the first Indian cricketer who played international cricket, Ranjitsinhji, who was also known as 'Ranji'.

The TRNA INDIA Pune Football League is organised by Pune District Football Association and is a ladder-based competition involving a total of four divisions and 100+ teams.

The MDFA Super Division is a men's semi-professional football league in Mumbai, a city in the Indian state of Maharashtra. The league serves as the second-tier of the Mumbai Football League and is organized by the Mumbai District Football Association.The champions of the Super Division get promoted to the Elite Division. The last place teams in the groups gets relegated to the First Division. It is contested by 29 clubs.

The MDFA Super Division is a men's semi-professional football league in Mumbai, a city in the Indian state of Maharashtra. The league serves as the second-tier of the Mumbai Football League and is organized by the Mumbai District Football Association. It is contested by 29 clubs. The two teams standing 1st and 2nd in their respective groups after completion of the Group Stage, advance to the knockout round of the MDFA Super Division. The team standing last after completion of the Group Stage in the each group will be demoted to the First Division of the 2018-19 season. The matches will be played at Mumbai Football Arena and St Xaviers Ground.

The 2018–19 MDFA Elite Division is the 106th season of the MDFA Elite Division, the top-tier football league in Mumbai, a city in the Indian state of Maharashtra. ONGC F.C. were the defending champions. The league will commence from 1 September 2018.

The 2019 Nigeria Women Premier League began July 24, 2019. The league was earlier scheduled to start in February, but due to logistic reasons and commencement of other competitions, it was postponed to March, May then later July. Prior to the start of the league, a congress was held in Abuja on June 27, with representatives from Nigeria Football Federation. Due to failure of some teams to pay their indemnities, the agreed date at the congress was shifted from July 17 to July 24.