Ravenhill is one of the most widely-performed playwrights in British theatre of the late-twentieth and twenty-first centuries. His major plays include Shopping and Fucking (first performed in 1996), [1] Some Explicit Polaroids (1999), Mother Clap's Molly House (2000), The Cut (2006), Shoot Get Treasure Repeat (2007) and The Cane (2018). He made his professional acting debut in his own monologue Product, at the 2005 Edinburgh Festival Fringe.

Ravenhill is the elder of two sons born to Ted and Angela Ravenhill. He grew up in West Sussex, England and cultivated an early interest in theatre, putting on plays with his brother when they were eight and seven, respectively. He studied English and Drama at Bristol University from 1984–1987, and worked as a freelance director, workshop leader and drama teacher. [2] In the mid-nineties, Ravenhill was diagnosed as HIV+, his partner of the early 1990s having died from AIDS. [3]

His first short play, Fist, gained the attention of Max Stafford-Clark, artistic director of Out of Joint Theatre Company who asked to see his next play. Ravenhill quickly finished the play that would make his name: Shopping and Fucking. It is set among a mostly young, queer group of friends and captured a generation using sex, drugs, popular culture and therapy to replace a fundamental lack of history, value and political commitment. The play toured with two successful runs at the Royal Court Theatre and then the West End, before embarking on world tours. It was one of the British plays that were picked up by German theatres to establish a new generational wave of directors, writers, and audiences. [4]

Ravenhill followed this with a series of plays that shared Shopping and Fucking's punky, gender-queer aggression, including Faust Is Dead (1997), Handbag (1998), Some Explicit Polaroids (1999). The plays did not necessarily share the attitudes of their characters and contained ironic commentary beneath the violence and intensity. Faust is Dead explored some queer post-modern ideas, with nods to Jean Baudrillard; Some Explicit Polaroids adopted some features of the 'State of the Nation Play', an epic left-wing theatre style associated with the 1970s. Each play simultaneously endorsed and critiqued the intellectual styles and movements that they were working in. [5]

Handbag was a response to Oscar Wilde's The Importance of Being Earnest making more explicit a sense of contemporary identities being connected to a longer history. This was brought even more to the fore in Mother Clap's Molly House, set in an eighteenth-century Molly House and depicting a range of gender-nonconformists from a pre-gay, pre-queer era exploring dissident sexualities. The play was directed by Nick Hytner who became Artistic Director of the National Theatre the year after, bringing in Ravenhill as a key advisor. [6]

Through the 2000s, Ravenhill moved further away from naturalism, continually changing styles and forms. His play The Cut moves into Pinteresque territory, its metaphorical image of a near-future society organised around an unspecified surgical procedure (the 'cut' of the title) was an allegory of liberal authoritarianism. Shoot Get Treasure Repeat began as a series of short (usually 20-minute) plays performed over successive mornings at the Edinburgh Festival in 2007, under the title Breakfast with Ravenhill (for which he received the Spirit of the Fringe award). Retitled collectively Shoot Get Treasure Repeat they were performed across London by the Gate Theatre, the Royal Court, the National Theatre, Paines Plough and others. Most of the plays' titles are drawn from the western literary canon, and offered satirical commentaries on western complacency, the Iraq War, and more. Product (2005), his monologue for two people (the second actor is silent) was a satire of Hollywood and attitudes to terrorism post-9/11. Ravenhill himself performed the role in the original tour. pool (no water) was written for the physical theatre company Frantic Assembly and concerned a group of artists who lament and celebrate the death of their successful colleague; the text was written in fragments, observing the speech patterns of the Young British Artists and the hypocrisies of artistic rivalry. Each of these texts move away from direct representations of the contemporary world towards something more abstract, minimalist, metaphorical. [7]

Despite this he continued to resist definition, also writing a pantomime, Dick Whittington (2006), for the Barbican Theatre, a piece for, about and performed by the drag performer Bette Bourne entitled A Life in Three Acts (2009), and a series of plays for young people: Totally Over You (2003), Citizenship (2005) and Scenes from Family Life (2007). [8]

His range widened further in the 2010s. At the end of the 2000s, Ravenhill collaborated with Ramin Gray in directing his own Over There, a highly experimental play and performance about twins separated by the Berlin Wall for the Royal Court. He also worked in music theatre, creating libretti for Monteverdi's The Coronation of Poppea and a new music-theatre piece Ten Plagues written for Marc Almond (both 2011). As Writer-in-Residence for the Royal Shakespeare Company, he produced a new translation of Brecht's Life of Galileo and a dramatisation and response to Voltaire's Candide (both 2013). At the end of the decade he collaborated with Robbie Williams and Guy Chambers on a musical adaptation of David Walliams's The Boy in the Dress (2019). He was commissioned by the London Gay Men's Chorus for a piece to mark the choir's 21st anniversary in 2012. With the music composed by Conor Mitchell, the piece, entitled Shadow Time, explores the evolution of mentalities in respect of homosexuality in the lifetime of the Chorus and was premiered at the Royal Festival Hall in May 2012 during the Chorus' summer concert: A Band of Brothers. [9] He returned to the Royal Court in 2018 with The Cane, about a schoolteacher whose distant history as an administer of corporal punishment threatens his reputation, his family even his life.

He created ITV sitcom Vicious with Gary Janetti which aired between 2013 and 2016.[ citation needed ] and in 2014 wrote a Doctor Who audio story entitled Of Chaos Time The for Big Finish. [10] 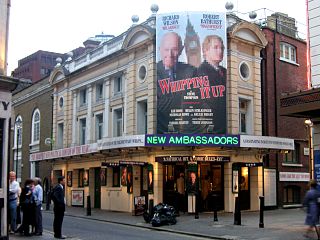 The Ambassadors Theatre, is a West End theatre located in West Street, near Cambridge Circus on Charing Cross Road in the City of Westminster. It is one of the smallest of the West End theatres, seating a maximum of 444, with 195 people in the dress circle and 251 in the stalls. 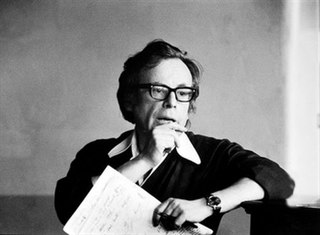 Peter Barnes was an English Olivier Award-winning playwright and screenwriter. His most famous work is the play The Ruling Class, which was made into a 1972 film for which Peter O'Toole received an Oscar nomination.

In-yer-face theatre is a style and sensibility of drama that emerged in Great Britain in the 1990s. This term was borrowed by British theatre critic Aleks Sierz as the title of his book, In-Yer-Face Theatre: British Drama Today, first published by Faber and Faber in March 2001. 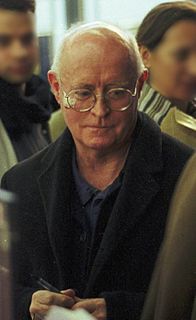 Edward Bond is an English playwright, theatre director, poet, theorist and screenwriter. He is the author of some fifty plays, among them Saved (1965), the production of which was instrumental in the abolition of theatre censorship in the UK. Other well-received works include Narrow Road to the Deep North (1968), Lear (1971), The Sea (1973), The Fool (1975), and Restoration (1981). Bond is broadly considered one among the major living dramatists but he has always been and remains highly controversial because of the violence shown in his plays, the radicalism of his statements about modern theatre and society, and his theories on drama.

Poppy is a 1982 musical comedy play set during the First Opium War. The play takes the form of a pantomime, complete with Dick Whittington, a pantomime dame, and two pantomime horses. The book and lyrics were written by Peter Nichols; the composer was Monty Norman. 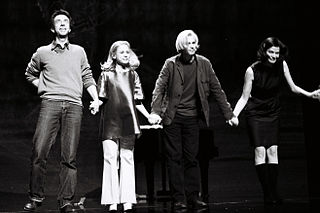 Shopping and Fucking is a 1996 play by English playwright Mark Ravenhill. It was Ravenhill's first full-length play. It received its first public reading at the Finborough Theatre, London, in 1995. It was performed in 1996 at the Royal Court Upstairs, before embarking on a national and international tour, co-produced by Out of Joint and the Royal Court Theatre.

Nigel Richards is an actor and singer best known in England for his work in musical theatre. Whilst still in training at the Guildhall School of Music & Drama he worked with Leonard Bernstein on the British stage premiere of Bernstein's Mass at the Barbican. He is currently a frequent lecturer on musical theatre in the United States, Malaysia and the United Kingdom.

Hoppla, We're Alive! is a Neue Sachlichkeit play by the German playwright Ernst Toller. Its second production, directed by the seminal epic theatre director Erwin Piscator in 1927, was a milestone in the history of theatre. The British playwright Mark Ravenhill based his Some Explicit Polaroids (1999) on Toller's play.

Conor Mitchell is a Northern Irish composer, librettist and theatre-maker.

Mother Clap's Molly House is a 2001 play by Mark Ravenhill with music by Matthew Scott. It is based on an essay in the book of the same name by Rictor Norton.

Connections is the Royal National Theatre in London's annual youth theatre festival. It was founded in 1995 and sponsored by Royal Dutch Shell until 2007 when the Bank of America took over the sponsorship. The plays are also published by the National Theatre each year.

Fear and Misery of the Third Reich, also known as The Private Life of the Master Race, is one of Bertolt Brecht's most famous plays and the first of his openly anti-Nazi works. It premiered on May 21, 1938 in Paris. This production was directed by Slatan Dudow and starred Helene Weigel. The production employed Brecht's epic theatre techniques to defamiliarize the behaviour of the characters and to make explicit the play's underlying message.

John Sheedy is an Australian theatre director, born in Geelong in 1972. He was educated at the National Institute of Dramatic Art (NIDA). Based in Melbourne, he is a director of drama and musicals for the stage as well as opera. He has been described as "a director of bold vision both filmic and theatrical”.

Andrew Scarborough is an English actor, most widely known for his recent role on screen as Tim Drewe in the multi BAFTA and Emmy award-winning Downton Abbey and as Graham Foster in the television drama series Emmerdale. He is also known for his other roles on screen in Hearts and Bones, The Bible, Jamaica Inn, Hidden and Bad Girls. He is also a theatre actor, performing in many of London's major theatres, including the West End theatre, and many provincial theatres in the UK, including mainland Europe with the Actors Touring Company—at the Renaissance-Theater Berlin in Mark Ravenhill's Handbag.

Mark Gillis is a British actor, writer and director. He is best known for writing, producing and directing the feature film Sink.