The MC2 Universe was conceived by writer/editor Tom DeFalco as a possible alternate future for the Marvel Universe, [1] set in the present day, with the first appearances of most Marvel heroes having taken place fifteen years earlier than in main continuity. The goal of the line was to produce comic books that were more accessible to a wider audience than Marvel’s main line of books and weren't entrenched in years of continuity, which was later repeated with the Ultimate Marvel imprint. The MC2 had a distinctly old-fashioned feel, with editorial and story choices reflecting late 80s–early 90s presentation and writing styles.[ citation needed ]

Three MC2 titles were launched in October 1998 as twelve-issue maxiseries: [2]

A-Next and J2 ended after twelve issues and were replaced by:

Spider-Girl meanwhile continued publication. However, with the collapse of a deal to sell the comics in Kmart and Target both Fantastic Five and Wild Thing were cancelled after five issues, leaving Spider-Girl as the only title in the MC2 Universe still published. [2] [3] A few spin-off limited series were launched during the time Spider-Girl was published, such as Darkdevil and Spider-Girl Presents The Buzz .

The Spider-Girl title was nearly cancelled several times due to low sales. Each time, campaigns by Tom DeFalco and fans of the title prevented cancellation. Fans created a webpage, savespidergirl.com, to help drum up support for the book. In an effort to boost sales on the title, Marvel reprinted Spider-Girl in small "Digest-sized" trade paperbacks.

A five-issue limited series set in the MC2 Universe titled Last Hero Standing was printed. In 2006, Marvel released another limited series set in the MC2 Universe titled Last Planet Standing . The series was intended to wrap up all the loose ends in the MC2 Universe and destroy it at the series' conclusion. As a result, Spider-Girl was slated to be cancelled at issue 100, where the character would die. [4] Due to backlash from DeFalco and fans, Marvel quashed the move and announced the relaunching of Spider-Girl under the title of Amazing Spider-Girl . [5] The "Amazing" title lasted until early 2009, when the book was again cancelled due to low sales. A third title, The Spectacular Spider-Girl, was then launched. Initially a digital exclusive, the Spectacular book was incorporated into the Amazing Spider-Man Family anthology magazine. After Amazing Spider-Man Family and its successor, Web of Spider-Man , folded, a final four-issue Spectacular Spider-Girl mini-series was produced, allowing many of the long-running plot threads from the book to be tied up. The final MC2-oriented story to date, a one-shot called Spider-Girl: The End, was published in 2010, which gave the title character a happy ending while leaving the door open for further adventures.

American Dream has appeared in both her own 2008 limited series and the 2011 five-issue limited series Captain America Corps, marking the first time an MC2 character has met or teamed up with characters from the mainstream Marvel universe.

Spider-Girl returned in the Spider-Verse storyline in 2014. During the story, it was revealed that when she traveled back in time to meet Spider-Man in his youth in her original series, she had entered Earth-616, the mainstream Marvel universe, before the point which it branched out into the MC2 universe. Her father, however, unfortunately died protecting May and Benjy from Daemos. As Daemos drained Peter's life force, May fled with Ben in her arms. Upon May's return home, Mary Jane passes Peter's former costume down to her, though Mayday eventually begins wearing a new outfit and eventually returns to her old one. Following Spider-Geddon it is revealed that the Multiversal entity known as The Other has chosen and sought Peter as its host, thus resurrecting him. [6]

The MC2 Universe also appears in the Secret Wars event in the Spider-Island tie-in backup.

DeFalco explained in an interview his views on the MC2 imprint: [7]

The Pulse: "A lot of people characterize the MC2 universe as having an 'old school' feel. Why do you think "modern" comic readers want to read something that feels like the best of the Silver Age?" DeFalco: "We are 'old school' because A) our heroes act like heroes…B) we don’t believe in decompression…C) we tell single-issue stories with subplots that build from issue to issue… and D) there’s a lot of action and angst in every issue."

May "Mayday" Parker is a fictional superheroine appearing in American comic books published by Marvel Comics. She has been referred to as both Spider-Girl and Spider-Woman. The character appears in the MC2 universe. The character was created by Tom DeFalco and Ron Frenz as the teenage daughter of Peter Parker (Spider-Man) and Mary Jane Watson, and first appeared in What If No. 105. She later acquired her own ongoing comic book, Spider-Girl, written by DeFalco and drawn by Frenz and Pat Olliffe, which was the longest-running superhero book with a lead female character ever published by Marvel before being relaunched as The Amazing Spider-Girl, and later The Spectacular Spider-Girl.

Mark Bagley is an American comics artist. He has worked for Marvel Comics on such titles as The Amazing Spider-Man, Thunderbolts, New Warriors, and Ultimate Spider-Man and for DC Comics on Justice League of America, Batman and Trinity.

Ultimate Marvel, later known as Ultimate Comics, was an imprint of comic books published by Marvel Comics, featuring re-imagined and modernized versions of the company's superhero characters from the Ultimate Marvel Universe. Those characters include Spider-Man, the X-Men, the Ultimates, the Fantastic Four and others. The imprint was launched in 2000 with the publication of the series Ultimate Spider-Man and Ultimate X-Men followed by The Ultimates and Ultimate Fantastic Four in 2002 and 2004 respectively providing new origin stories for the characters. The reality of Ultimate Marvel is designated as Earth-1610 as part of the Marvel Comics Multiverse.

Roger Stern is an American comic book author and novelist.

Marvel Super Hero Contest of Champions is a three-issue comic book limited series published from June to August 1982 by Marvel Comics. The series was written by Mark Gruenwald, with art by John Romita Jr. and Bob Layton.

Marvel Adventures, formerly Marvel Age, was an imprint of Marvel Comics intended for younger audiences, including small children. Unlike the standard comics published by Marvel, which often take place in story arcs spanning several issues, each Marvel Adventures comic tells a standalone story. In April 2012 it was replaced by all new All Ages line tied to the Marvel Universe block on Disney XD.

Tom DeFalco is an American comic book writer and editor, well known for his association with Marvel Comics and in particular for his work with Spider-Man.

Secret Wars II is a nine-issue comic book limited series and crossover published from 1985 to 1986 by Marvel Comics. The series was written by Marvel's then editor-in-chief Jim Shooter and primarily pencilled by Al Milgrom. 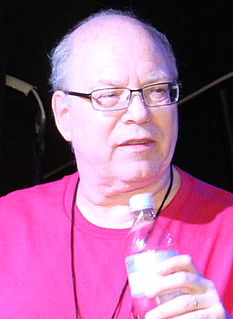 Allen L. Milgrom is an American comic book writer, penciller, inker and editor, primarily for Marvel Comics. He is known for his 10-year run as editor of Marvel Fanfare; his long involvement as writer, penciler, and inker on Peter Parker, The Spectacular Spider-Man; his four-year tenure as West Coast Avengers penciller; and his long stint as the inker of X-Factor.

Spider-Ham is a fictional character appearing in American comic books published by Marvel Comics. The character is an anthropomorphic funny animal parody version of Spider-Man, and was created by editor Larry Hama, Tom DeFalco and Mark Armstrong.

Dan Slott is an American comic book writer, who is the current writer on Marvel Comics' Fantastic Four. He is best known for his long run on The Amazing Spider-Man, as well as Arkham Asylum: Living Hell, She-Hulk, Silver Surfer, The Superior Spider-Man, Tony Stark: Iron Man, The Mighty Avengers, Batman Adventures, and Ren & Stimpy.

Alan Gordon is an American comic book creator primarily known as an inker and writer. He is best known for his 1990s work on DC Comics' Legion of Super Heroes and the Justice League of America, Marvel Comics' Fantastic Four, and Image Comics' creator-owned WildStar.

Mr. and Mrs. Spider-Man is a short comic strip series published in the pages of The Amazing Spider-Man Family, in August 2008. It was written by Tom DeFalco, and illustrated by Ron Frenz and several other artists. 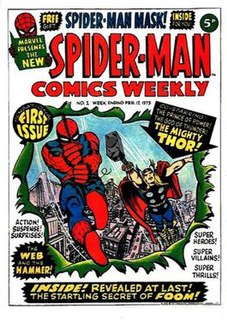