"Mending Wall" is a poem by the twentieth-century American poet Robert Frost (1874–1963). It opens Frost's second collection of poetry, North of Boston , [1] published in 1914 by David Nutt, and it has become "one of the most anthologized and analyzed poems in modern literature". [2]

Like many of the poems in North of Boston , "Mending Wall" narrates a story drawn from rural New England. [3] The narrator, a New England farmer, contacts his neighbor in the spring to rebuild the stone wall between their two farms. As the men work, the narrator questions the purpose of a wall "where it is we do not need the wall" (23). He notes twice in the poem that "something there is that doesn’t love a wall" (1, 35), but his neighbor replies twice with the proverb, "Good fences make good neighbors" (27, 45).

Noted philosopher and politician Onora O'Neill uses the poem to preface her 2016 book Justice Across Boundaries: Whose Obligations? [4]

Despite its simple, almost folksy, language, "Mending Wall" is a complex poem with several themes, beginning with human fellowship, which Frost first dealt with in his poem "A Tuft of Flowers" in his first collection of poems, A Boy's Will . [1] Unlike the earlier poem, which explores the bond between men, "Mending Wall" deals with the distances and tensions between men. [5] The poem considers the contradictions in life and humanity, including the contradictions within each person, as man "makes boundaries and he breaks boundaries". [6] It also examines the role of boundaries in human society, as mending the wall serves both to separate and to join the two neighbors, another contradiction. [7] "Mending Wall" also plays with the theme of seasons as recurring cycles in life, and contrasts those cycles with both physical and language parallelism as the men walk along the wall, each to a side, and their language stays each to a side. [6] Frost further meditates on the role of language as a kind of wall that both joins and separates people. [5] [6] Finally, Frost explores the theme of mischief and humor, as the narrator says halfway through the poem, "Spring is the mischief in me, and I wonder/If I could put a notion in his head" (28, 29). Mending the wall is a game for the narrator but in contrast, the neighbor seems quite serious about the work. The narrator notes how the neighbor seems to be walking not only in the thick shade of woods and trees, but in actual "darkness", implying ignorance and/or inhospitable sentiments. [5] [6]

Warfield is a home rule-class city in Martin County, Kentucky, United States. The population was 269 at the 2010 census. 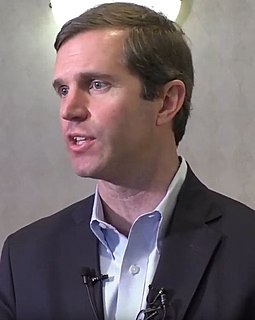 The Governor of the Commonwealth of Kentucky is the head of Kentucky's executive branch of government. 62 men and one woman have served as Governor of Kentucky. The governor's term is four years in length; since 1992, incumbents have been able to seek re-election once before becoming ineligible for four years. Throughout the state's history, four men have served two non-consecutive terms as governor, and two others have served two consecutive terms. Kentucky is one of only five U.S. states that hold gubernatorial elections in odd-numbered years. The current governor is Andy Beshear, who was first elected in 2019.

American poetry refers to the poetry of the United States. It arose first as efforts by American colonists to add their voices to English poetry in the 17th century, well before the constitutional unification of the Thirteen Colonies. Unsurprisingly, most of the early colonists' work relied on contemporary English models of poetic form, diction, and theme. However, in the 19th century, a distinctive American idiom began to emerge. By the later part of that century, when Walt Whitman was winning an enthusiastic audience abroad, poets from the United States had begun to take their place at the forefront of the English-language avant-garde.

Mint julep is a mixed alcoholic drink, or cocktail, consisting primarily of bourbon, sugar, water, crushed or shaved ice, and fresh mint. As a bourbon-based cocktail, it is associated with the American South and the cuisine of the Southern United States in general, and the Kentucky Derby in particular. 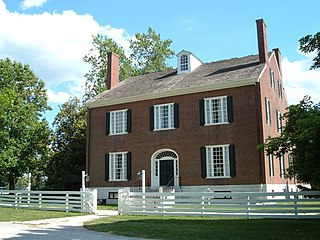 Pleasant Hill, Kentucky, USA, is the site of a Shaker religious community that was active from 1805 to 1910. Following a preservationist effort that began in 1961, the site, now a National Historic Landmark, has become a popular tourist destination. Shaker Village of Pleasant Hill, or Shakertown, as it is known by residents of the area, is located 25 miles (40 km) southwest of Lexington, in Kentucky's Bluegrass region. It is a National Historic Landmark District.

Harlan Hubbard was an American artist and author, known for his simple lifestyle.

Cornettsville is an unincorporated community in Perry County, Kentucky, United States, within the state's eastern mountain region known for coal mining. The population is 792 as of the 2000 United States Census. The town was named for one of the early pioneers to the area, William Jesse Cornett, whose log cabin and burial site can still be seen today.

Leonard W. Roberts was an early folklorist, professor, and publisher.

North of Boston is a collection of seventeen poems by Robert Frost, first published in 1914 by David Nutt. Most of the poems resemble short dramas or dialogues. It is also called a book of people because most of the poems deal with New England themes and Yankees farmers. Ezra Pound wrote a review of this collection in 1914. Despite it being called "North of Boston", none of the poems have that name.

The Robert Frost Farm in Derry, New Hampshire is a two-story, clapboard, connected farm built in 1884. It was the home of poet Robert Frost from 1900 to 1911. Today it is a New Hampshire state park in use as a historic house museum. The property is listed in the National Register of Historic Places as the Robert Frost Homestead.

Alice Spencer Geddes Lloyd was an American social reformer who founded Alice Lloyd College in Pippa Passes, Kentucky. She worked as a writer, editor, and educator. She supported women's suffrage and was a freethinker.

Strunk is an unincorporated community and coal town in McCreary County, Kentucky, United States. The community's post office was established as Strunks Lane on February 18, 1892 and was probably named for George W. Strunk, who owned a local coal mine. By 1894, the post office's name was simplified to Strunk. Its ZIP code is 42649.

River is an unincorporated community in Johnson County, Kentucky, United States. The post office was first established on September 6, 1890, and its current ZIP code is 41254. Its telephone area code is 606. Its geographic coordinates are.

Eliza Caroline "Lida" Obenchain, was an American author, women's rights advocate, and suffragist from Bowling Green, Kentucky. Lida Obenchain, writing under the pen name Eliza Calvert Hall, was widely known early in the twentieth century for her short stories featuring an elderly widowed woman, "Aunt Jane", who plainly spoke her mind about the people she knew and her experiences in the rural south.

"Goodbye Mama " is a World War II song written and composed by J. Fred Coots. The wartime song was first published in 1941 by Chappell and Co. in New York, NY. The song has a march-tempo, 4/4 meter with some syncopated rhythm. The tune is cheery and akin to a Boy Scout hiking song. 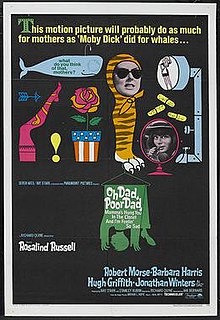