The Detroit Metro Times is an progressive alternative weekly located in Detroit, Michigan. It is the largest circulating weekly newspaper in the metro Detroit area.

Supported entirely by advertising, it is distributed free of charge every Wednesday in newsstands in businesses and libraries around the city and suburbs. Compared to the two dailies, the Detroit Free Press and the Detroit News , the Metro Times has a liberal orientation, like its later competitor Real Detroit Weekly. Average circulation for the Metro Times is 50,000 weekly. [1] Average readership is just over 700,000 weekly. [2]

Syndicated alternative comics run by the Metro Times have in the past included Perry Bible Fellowship , This Modern World , Eric Monster Millikin and Red Meat . The Metro Times also prints Dan Savage's Savage Love sex advice column (which replaced Isadora Alman's Ask Isadora sex advice column) and Cal Garrison's Horoscopes (which replaced Rob Brezsny's Free Will Astrology). Starting with the January 19–25 issue, the Metro Times had its own exclusive crossword, crafted by Brooklyn-based cruciverbalist Ben Tausig, who appears in the documentary Wordplay . Editors cut the crossword in May 2008 to save space.

The paper was founded in 1980 by publisher and editor Ron Williams. In December 2012, Metro Times Editor W. Kim Heron announced his departure. Heron had previously been the paper's managing editor. In March 2013, after three months during which Michael Jackman was interim editor, the publisher named Bryan Gottlieb as Editor-in-Chief. [4]

In April 2014, Valerie Vande Panne, former editor of High Times, was named editor-in-chief. [5] In May 2014, the Metro Times merged with Real Detroit Weekly, which had been a Detroit-area alternative weekly paper since 1999. [6] Dustin Blitchok took over as editor-in-chief in February 2016, [7] before resigning from the position in November of the same year. Former Metro Times staff writer and associate editor for Hour Detroit Lee DeVito was named editor-in-chief following Blitchok's departure. [8]

The Metro Times was an official sponsor of the now-defunct Detroit Festival of the Arts and had one of the stages named after it.

The Metro Times, is well known for its progressive news and opinion.

The headquarters are located in Midtown Detroit. [9] It was previously headquartered in the Detroit Cornice and Slate Company Building in Downtown Detroit. [10] The Metro Times moved to the Cornice and Slate building in the 1990s and building owners constructed a wraparound expansion to give the newspaper additional room. [11] In 2013 Blue Cross Blue Shield purchased the Cornice and Slate building, forcing the Metro Times to move to a leased space in Ferndale. [12] [13] According to editor-in-chief Lee DeVito, the newspaper intended to eventually return to Detroit. [14] In 2018, Metro Times returned to Detroit, moving into the Arnold E. Frank Building in Midtown. [15]

The South End is the official student newspaper of Wayne State University in Detroit, Michigan, published in print and online. It was founded in 1967, and its publication is funded partly from university funds and partly from advertising revenues. It is distributed free of charge. 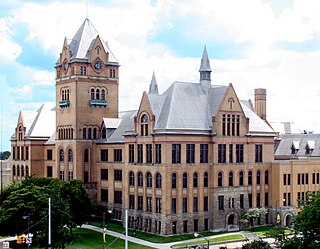 Midtown Detroit is a mixed-use area consisting of a business district, cultural center, a major research university, and several residential neighborhoods, located along the east and west side of Woodward Avenue, north of Downtown Detroit, and south of the New Center area. The community area of neighborhoods is bounded by the Chrysler Freeway (I-75) on the east, the Lodge Freeway (M-10) on the west, the Edsel Ford Freeway (I-94) on the north, and the Fisher Freeway (I-75) on the south. The area includes several historic districts, the Detroit Medical Center, and Wayne State University.

The Chronicle is a weekly African American newspaper based in Detroit, Michigan. It was founded in 1936 by John H. Sengstacke, owner of the Chicago Defender. Together with the Defender and a handful of other African-American newspapers, it is owned by Detroit-based Real Times Inc. Its headquarters are in the Real Times offices in Midtown Detroit.

Daniel Gilbert is an American billionaire businessman, investor, and philanthropist. He is the cofounder of Quicken Loans and founder of Rock Ventures. He is the owner of the National Basketball Association's Cleveland Cavaliers. Gilbert owns several sports franchises, including the American Hockey League's Cleveland Monsters, and the NBA G League's Canton Charge. He operates the Rocket Mortgage FieldHouse in Cleveland, Ohio, home to the Cavaliers and Monsters.

Crain Communications Inc is an American multi-industry publishing conglomerate based in Detroit, Michigan with 13 non-US subsidiaries.

Crain's Chicago Business is a weekly business newspaper in Chicago. It is owned by Detroit-based Crain Communications, a privately held publishing company with more than 30 magazines, including Advertising Age, Modern Healthcare, Crain's New York Business, Crain's Detroit Business, Crain's Cleveland Business, and Automotive News. It has a print circulation of 53,313 and a readership of 219,693 per week. ChicagoBusiness.com, the paper's digital equivalent, draws over 1 million unique visitors per month and over 2.2 million page views per month.

Walter Nickell (Nick) Sousanis is a scholar, art critic, and cartoonist; a co-founder of the TheDetroiter.com, he is also the first person at Columbia University to write a dissertation entirely in a comic book format. 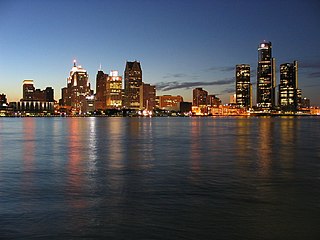 Downtown Detroit is the central business district and a residential area of the city of Detroit, Michigan, United States. Locally, downtown tends to refer to the 1.4 square mile region bordered by M-10 to the west, Interstate 75 to the north, I-375 to the east, and the Detroit River to the south. Although, it may also refer to the Greater Downtown area, a 7.2 square mile region that includes surrounding neighborhoods such as Midtown, Corktown, Rivertown, and Woodbridge.

Real Times Media LLC is the owner and publisher of the Chicago Defender, the largest and most influential African American weekly newspaper, as well as five other regional weeklies in the eastern and Midwestern United States. Its headquarters are in Midtown Detroit.

The Milner Arms Apartments, originally known as the Hotel Stevenson, is a high rise building located at 40 Davenport Street in Midtown Detroit, Michigan; it was listed on the National Register of Historic Places in 1997. It is adjacent to, but not part of, the Cass-Davenport Historic District.

The Detroit Cornice and Slate Company Building is a Beaux-Arts style industrial office building located at 733 St. Antoine Street in Downtown Detroit, Michigan. It was listed on the National Register of Historic Places and designated a Michigan State Historic Site in 1974.

Brett Callwood is an English journalist, copy writer, editor and author, currently living and working in Los Angeles. He is the music editor with the LA Weekly. He was previously a reporter at the Longmont Times-Call and Daily Camera, the music editor at the Detroit Metro Times and editor-in-chief at Yellow Scene magazine.

The Michigan FrontPage is a weekly African American newspaper based in Detroit, Michigan, serving the African-American community. It was founded in 2000 by a former publisher of the Michigan Chronicle and has been owned by the Chronicle's parent company, Real Times Inc., since 2003. Its headquarters are in the Real Times offices in Midtown Detroit.

A 2013 report by the Global Detroit and Data Driven Detroit stated that of the immigrant ethnic groups to Metro Detroit, the largest segment is the Indian population. As of 2012, the Indian populations of Farmington Hills and Troy are among the twenty largest Indian communities in the United States. As of the 2000 U.S. Census there were 39,527 people with origins from post-partition India in Metro Detroit, making them the largest Asian ethnic group in the Wayne County-Macomb County-Oakland County tri-county area. People of those origins are found throughout Metro Detroit, with the majority being in Oakland County.

Novi Town Center is an open-air shopping center located at Novi Road and Grand River in Novi, Michigan in Metro Detroit. Owned by CBRE, the center is along Interstate 96, with the Twelve Oaks Mall on the other side of the interstate.