A microvan is a van or minivan that fits into Japanese kei car classification or similar, and is smaller than a mini MPV.

Microvans share similar characteristics with other sized MPVs by either seldomly or commonly consisting of sliding doors and carry 6/7/8 passengers. Since this category of a vehicle has fixed 3rd row seats, it implies that there is one vehicle for only passengers and another vehicle only for cargo and it doesn't have the 3rd row dedicated for both passengers and cargo purposes, these vehicle are not usually considered Multi Purpose Vehicles.

Tax and insurance benefits in some places make these models particularly inexpensive. For example, in rural Japan kei car vehicles are exempted from a certification that there is adequate parking available for the vehicle. [2] They are therefore widely used for small business in these places.

The first vehicle to adopt the style of a van, with the engine installed in front of the driver was the 1970s Honda Life "StepVan". Some microvans utilize a drivetrain with the engine installed transversely, using front or all wheel drive, while others use a cab over approach where the engine is installed beneath the driver, while still utilizing all wheel drive or rear drive powertrains. Cab over variants usually share their chassis with kei truck derivatives from the same manufacturer.

Most microvans have two swinging front doors, two sliding rear doors and a large tailgate. Seating can vary from two to nine; these seats are usually very thin and vertical to optimise room. The side windows in commercial-only versions of microvans are replaced by metallic panels and sometimes call also as "blind van". Some models also feature pick-up variants with one or two seat rows. Engines usually have displacements under 1.0 litre; for example, Japanese microvans have a limit of 660 cc. Outside the Japanese market, there are microvans available with 850 cc to 1.6 litre engines.

The kei car regulation is used only in Japan, though other Asian automakers also design microvans with similar characteristics. The microvans are commonly known as "kei one box" in Japan alongside their pick-up version twins known as kei truck.

Due to the inherent compact size, lack of crumple zones, and low weight these vehicles tend to fare poorly in collisions with other vehicles and objects, and as a result are not recommended to be driven at higher speeds. The IIHS in the USA recommends these vehicles are only driven on private land and not on public roads due to their poor safety in accidents. 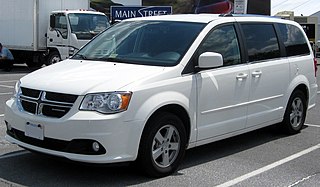 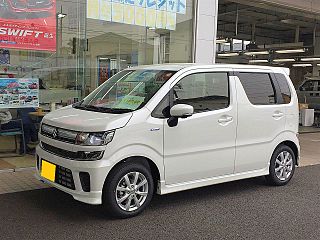 Kei car, known variously outside Japan as Japanese city car, ultramini, or Japanese microcar, is the Japanese vehicle category for the smallest highway-legal passenger cars. Similar Japanese categories exist for microvans, and Kei trucks. These vehicles are most often the Japanese equivalent of the EU A-segment. 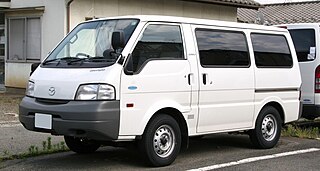 The Mazda Bongo, also known as Mazda E-Series, Mazda Access, and the Ford Econovan, is a cabover van and pickup truck manufactured by the Japanese automobile manufacturer Mazda since 1966. It has been built with rear-, middle-, as well as front-mounted engines. It also formed the basis for the long running Kia Bongo range. It is named for the African Bongo, a type of antelope.

The Nissan Prairie, introduced in Japan in 1981 and Europe in 1982, was a mini MPV/compact MPV manufactured and marketed by Nissan. It was marketed also as the Multi in Canada and the Stanza Wagon in the United States. In Japan, it was exclusive to Nissan Bluebird Store locations, then later at Nissan Blue Stage sales channels. The Prairie had a very flexible seating capability and sliding rear doors on both sides of the vehicle, with a liftgate in the back. 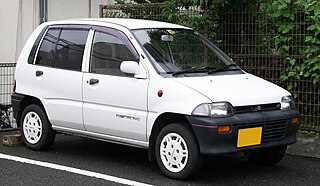 The Mitsubishi Minica is a kei car produced by Mitsubishi Motors (MMC) mainly for the Japanese domestic market from 1962 to 2011. It was first built by Shin Mitsubishi Heavy-Industries, one of Mitsubishi Heavy Industries' three regional automotive companies until they were merged in 1964, and as such predates MMC itself. In Japan, it was sold at a specific retail chain called Galant Shop. In 2011, the car was replaced with the Mitsubishi eK.

The Mitsubishi Chariot is a small multi-purpose vehicle (MPV) manufactured and marketed by Mitsubishi from 1983 to 2003. Based on the SSW concept car first exhibited at the 23rd Tokyo Motor Show in 1979, the MPV derives its nameplate from chariots used by the ancient Greek and Roman Empires.

The Daihatsu Hijet is a cab over microvan and kei truck produced and sold by the Japanese automaker Daihatsu since 1960. Despite the similarities between the Hijet name and Toyota's naming scheme for its trucks and vans, the name "Hijet" has been in use for Daihatsu's Kei trucks and Microvans since 1960, over two decades before Toyota took control. "Hijet", when transliterated into Japanese, is very similar to "Midget", one of Daihatsu's other mini-trucks. According to Daihatsu, the name "Hijet" was created to imply that the vehicle offers higher performance than the Midget. The Hijet competes in Japan with the Honda Acty, Mitsubishi Minicab, Nissan Clipper, Subaru Sambar and Suzuki Carry. 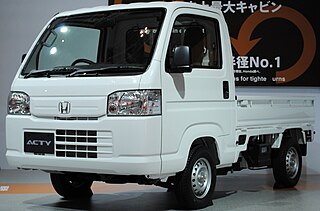 The Honda Acty is a series of cabover microvans and kei trucks produced by the Japanese automaker Honda from 1977 to 2021, designed for the Japanese domestic market (JDM). "Acty" is short for "Activity".

The Honda Life is an automobile nameplate that was used on various kei car/city cars produced by Honda: passenger cars, microvans, and kei trucks. The first series of the nameplate was built between 1971 and 1974, with the nameplate revived in 1997 and used until 2014. The Japanese-market Life has rarely been marketed outside Japan.

The Subaru Sambar is a cabover kei truck and microvan manufactured by Subaru, a division of Subaru Corporation, specifically for the Japanese market. It is Japan's first Keitora (軽トラ), shorthand for "kei class truck" and is still in production. The Sambar is available in both microvan and Kei truck to fulfill the Kei car guidelines. Still popular in the domestic market, Subaru no longer produces the Sambar themselves as the nameplate has been used on a rebadged Daihatsu Hijet since 2012. The Sambar has also been produced in China as well as in Finland in a joint venture with Elcat Automotive. 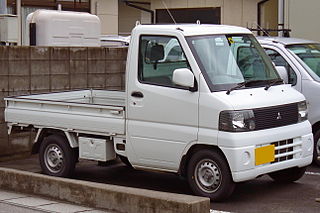 The Mitsubishi Minicab is a cabover kei truck and microvan built and sold in Japan by the Japanese automaker Mitsubishi Motors since 1966. In Japan, it was sold at a specific retail chain called Galant Shop. An all-electric model of the Minicab, called the Minicab MiEV, is sold in the Japanese market since December 2011. It was also sold by China Motor Corporation (CMC) in Taiwan as the CMC Verica, starting in 1985. Since February 2014, the Mitsubishi Minicab is a rebadged Suzuki Carry and Every. 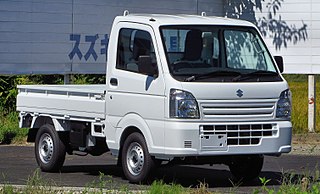 The Suzuki Carry is a kei truck produced by the Japanese automaker Suzuki. The microvan version was originally called the Carry van until 1982 when the passenger van versions were renamed as the Suzuki Every. In Japan, the Carry and Every are kei cars but the Suzuki Every Plus, the bigger version of Every, had a longer bonnet for safety purposes and a larger 1.3-liter 86 hp (63 kW) four-cylinder engine. They have been sold under a myriad of different names in several countries, and is the only car to have been offered with Chevrolet as well as Ford badges.

The Subaru Sumo, known as the Libero in European markets except the UK, Iceland, and Sweden, and as the Domingo in the Japanese market, was a cabover microvan produced from 1983 to 1998. In Belgium, it was known as the Combi, and in Taiwan the latter generation was marketed as the Estratto. It was also called the Subaru E10 and Subaru E12 respectively in some places, the names referring to the size of the engines. The Sumo shared many characteristics with the Sambar, except it had extended front and rear bumpers and a larger engine borrowed from the Subaru Justy. Because of these modifications, it didn't conform to kei car regulations, which stipulate the maximum dimensions of the vehicle and the maximum engine displacement requirements, which then determine the vehicle tax to be paid. 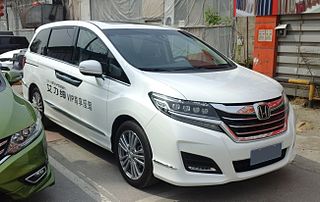 The Honda Elysion is a minivan with seven or eight seats that was initially sold only in Japan as a competitor to the Toyota Alphard and the Nissan Elgrand. It is related to the USA-spec Honda Odyssey but is not the same vehicle. One of the major differences from the previous generation JDM Honda Odyssey was that the rear doors were exchanged to sliding doors typically used on minivans, whereas the JDM Odyssey used conventional doors. The USA-spec Honda Odyssey, known in Japan as the Honda LaGreat, was too large for Japan, so the Elysion took many styling cues from the LaGreat and used them on a smaller vehicle.

The Wuling Dragon was a series of cabover microvans and kei trucks made by SAIC-GM-Wuling Automobile, the Chinese joint venture with General Motors of the United States of America. The Dragon is the successor of the earlier Liuzhou Wuling LZ 110, which was based on the 1977-1984 Mitsubishi Minicab.