Mukti Mohan is a contemporary dancer from India. She participated in Star One's dance reality show Zara Nachke Dikha . She was part of the winning team "Masakkali Girls". She also appeared in the comedy show Comedy Circus Ka Jadoo on Sony Entertainment Television, with Kapil Sharma as her comedy partner, replacing Kavita. Recently she featured in Coke Studio season 4 video of the song "Teriyaan Tu Jaane", by Amit Trivedi. She has hosted the second season of Dil Hai Hindustani along with Raghav Juyal . She has also participated in the Jhalak Dikhla Jaa wild card entry. [1] Mohan has also appeared in the films Blood Brothers , Saheb, Biwi Aur Gangster , Hate Story and Daruvu . Currently, she is appearing in a YouTube web series Inmates of the popular YouTube channel TVF. [2] She also appears on Nach Baliye 7 . [3] The Indian play back singer Neeti Mohan and dancer Shakti Mohan are her elder sisters.

Sana Saeed is an Indian actress and model, who has appeared in Bollywood films. Her first appearance was as a child artist in Kuch Kuch Hota Hai (1998) and continued to do so in films Har Dil Jo Pyar Karega (2000) and Badal (2000). She also appeared in television shows such as Babul Ka Aangann Chootey Na (2008) and Lo Ho Gayi Pooja Iss Ghar Ki (2008). In 2012, Saeed made her screen debut as an adult in a supporting role in Karan Johar's Student Of The Year, which emerged as a box-office commercial success. She has appeared in many reality shows including Jhalak Dikhhla Jaa (2013), Nach Baliye (2015) and Fear Factor: Khatron Ke Khiladi (2016).

Archana Puran Singh is an Indian film actress and television presenter. She is known for comedy roles in Bollywood movies and as a judge on comedy shows like Sony TV India's The Kapil Sharma Show. She is mostly regarded for her role of Miss Braganza in the film Kuch Kuch Hota Hai. She has been judging the television reality comedy show, Comedy Circus, since 2006 and is the only judge to have appeared in all the seasons. Archana Puran Singh has been featured in 100+ Movies and Television serials.

Mahhi Vij is an Indian model and actress who appears in Malayalam and Hindi movies. She is known for playing the role of Nakusha in Laagi Tujhse Lagan and Nandini in Balika Vadhu. Vij and her husband Jay Bhanushali won the dance reality show Nach Baliye 5 in 2013.

Karishma Tanna is an Indian actress, model and anchor who predominantly works in Hindi films and television shows. She made her debut with Kyunki Saas Bhi Kabhi Bahu Thi in 2001. She is well known for her roles in Naagarjuna – Ek Yoddha and Qayamat Ki Raat.

Jasmin Bhasin is an Indian actress and model. She is known for portraying the role of Twinkle Taneja Sarna in Tashan-e-Ishq and Teni Bhanushali in Dil Se Dil Tak. She participated in Fear Factor: Khatron Ke Khiladi 9 (2019) and Bigg Boss 14 (2020).

Dharmesh Yelande is a Indian dancer, choreographer and film actor. 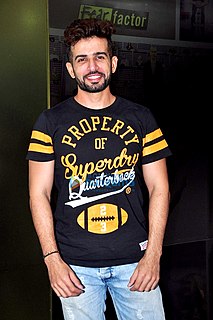 Jay Bhanushali is an Indian television actor. He is best known for his portrayal as Neev Shergill in Ekta Kapoor's Indian soap opera Kayamath that aired on Star Plus. 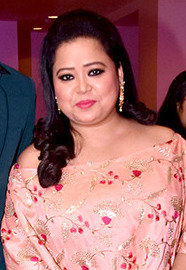 Bharti Singh is an Indian comedian, and television personality. Singh has created numerous comedy sketch shows as well as has hosted various award shows. She participated in the reality shows Jhalak Dikhhla Jaa (2012), Nach Baliye 8 (2017) and Fear Factor: Khatron Ke Khiladi 9 (2019). As of December 2019, she appeared on Khatra Khatra Khatra, a show conceptualised by her husband Haarsh Limbachiyaa for Colors TV.Since 2016, Singh has appeared in Forbes India's celebrity 100 list.

Raghav Juyal is an Indian dancer, choreographer, actor and television presenter. He has been called King of Slow Motion for his surreal dance moves in slow motion style and for his reinvention of the Slow Motion Walk in India.

Jhalak Dikhhla Jaa 6 is the sixth season of the dance reality show, Jhalak Dikhhla Jaa. It premiered on 1 June 2013 on Colors. The season was hosted by Manish Paul and Kapil Sharma. Madhuri Dixit, Karan Johar and Remo D'Souza were the three judges. The finale took place on 14 September 2013 and was won by Drashti Dhami with Salman Yusuff Khan, Lauren Gottlieb and Punit Pathak became the runner-up.

Faisal Khan is an Indian dancer and actor. He is the Winner of Jhalak Dikhhla Jaa 8 with Vaishnavi Patil. Khan gave an audition in the second season of dance reality show Dance India Dance Li'l Masters, where he came out as the winner. He also participated in Dance Ke Superkids and DID Dance Ka Tashan. 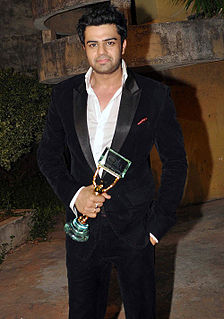 Indian Telly Award for Best Anchor is an award given by Indiantelevision.com as part of its annual Indian Telly Awards for TV serials, to recognize a person who has hosted a television reality show and been appreciated by the Indian audience.

Punit J Pathak is an Indian dancer, choreographer and actor. 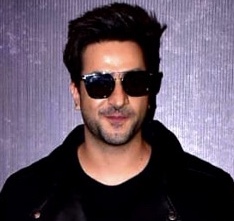 Aly Goni is an Indian actor and model working in the Hindi television industry. He is known for portraying Raj Kapoor as a lead in Kuch Toh Hai Tere Mere Darmiyaan and Romi Bhalla in Yeh Hai Mohabbatein.

The Second Season of singing reality show Dil Hai Hindustani premiered on 7 July 2018. The show was broadcast on StarPlus and streams on Hotstar. The show was hosted by Mukti Mohan and Raghav Juyal. Sunidhi Chauhan, Badshah and Pritam are judges in the show. The show was produced by Ranjeet Thakur and Hemant Ruprell under Frames Production.The season was won by Akshay Dhawan.