Neeta Puri (Hindi : नीता पुरी) is an Indian film actress who works in Hindi films. She was born in Punjab, India. She made her film debut in 1985. Neeta Puri is married to Khursheed Latif, who is also a Hindi film director. Neeta Puri owns a western clothing and jewelry store named "Neeta Puri's Expressions". [3] She is the winner of Miss India contest of New York in 1983. [2] Neeta Puri now lives in Delaware Water Gap, Pennsylvania. 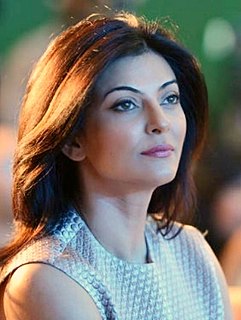 Sushmita Sen is an Indian actress and model who was crowned Femina Miss India in 1994 and won Miss Universe 1994 at the age of 18. Sen is the first Indian woman to win the competition and has since primarily worked in Hindi films. 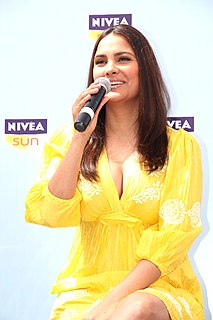 Lara Dutta Bhupathi is an Indian actress, entrepreneur and the winner of the Miss Universe 2000 pageant. She was previously crowned as Miss Intercontinental 1997. In her career, she has primarily worked in Hindi films. She is the recipient of several accolades including a Filmfare Award.

Yukta Inderlal Mookhey is an Indian actress, model and beauty pageant titleholder. She represented India at Miss World 1999 and eventually won the contest, becoming the fourth Indian woman to win Miss World. She has worked in few Hindi films, and is also involved in social works. 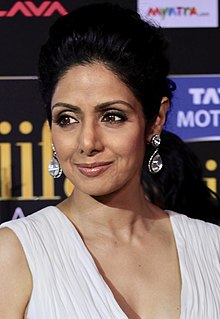 Sridevi was an Indian actress and producer, who worked in Tamil, Telugu, Hindi, Malayalam and Kannada films. Regarded as the "First female Superstar" of Indian cinema, she was the recipient of various accolades, including a National Film Award, a Nandi Award, the Tamil Nadu State Film Award, the Kerala State Film Award, three Filmfare Awards and three Filmfare Awards South. In 2013, the Government of India awarded her with Padma Shri, the country's fourth-highest civilian honor. In a career that spanned five decades, she was known for her portrayals of women in challenging situations, and appeared in a range of genres, from slapstick comedy to epic dramas. Sridevi was the highest-paid actress in the late 1980s and early 1990s. She is regarded as one of the greatest and most influential actresses in the history of Indian cinema.

Natasha Suri is an Indian actress, TV host and former Miss World India. In 2006 at age 16, she won the Femina Miss India World title and was in the Top 10 at the Miss World contest. Suri also places in the 'Supermodel' bracket in India.

Yogeeta Bali Chakraborty is a former Indian Hindi film actress. She was active in the late 1960s and through the 1970s.

Rohit Roy is an Indian television and film actor. He is known for his role in Hindi television serials such as Des Mein Niklla Hoga Chand and Swabhimaan. Besides working in television series, Rohit has also acted in notable Bollywood movies such as Kaabil, Ek Khiladi Ek Haseena, Apartment and Plan among others. He starred in the movie Shootout at Lokhandwala, in which he portrayed the character Fattu, one of the gang members. Roy has also directed a short film named Rice Plate – as a part of the anthology film Dus Kahaniyaan.. Rohit Roy launched his own fashion brand in the year 2020, Rohit Roy for Styched, in association with Styched Life.

Debashree Roy is an Indian actress, dancer, choreographer, politician and animal rights activist. As an actress, she is known for her work in Hindi and Bengali cinema. She has been cited as the reigning queen of Bengali commercial cinema. She acted in more than a hundred films and won over forty awards, including a National Award, three BFJA Awards, five Kalakar Awards and an Anandalok Award. As a dancer, she is known for her stage adaptations of the various forms of Indian folk dances as well as her innovative dance forms imbued with elements from Indian classical, tribal and folk dance. She is the producer, choreographer and motivator of Natraj dance troupe. She is the founder of Debasree Roy Foundation, a non-profit organisation that works for the cause of stray animals. Roy is a Member of the Legislative Assembly from Raidighi constituency since 2011.

The Train is a 1970 Indian Hindi-language thriller film starring Rajesh Khanna and Nanda. The film is recorded as a "Hit" at Box Office India. Khanna stars as Police Inspector Shyam Kumar, who sets out to solve a series of murders which have all taken place on a train. Complicating the situation are his girlfriend Neeta (Nanda), who has been acting mysteriously ever since she began her new job, and hotel dancer Miss Lily (Helen), who tries to seduce the good police inspector, but may find that she loses her heart instead. This movie was co-produced by Rajendra Kumar and it was Nanda who suggested Rajendra to cast Rajesh Khanna in the main lead. This film is counted among the 17 consecutive hit films of Rajesh Khanna between 1969 and 1971, by adding the two-hero films Marayada and Andaz to the 15 consecutive solo hits he gave from 1969 to 1971.

Gauhar Khan is an Indian model and actress. After pursuing modeling, she made her acting debut with Yash Raj Films' Rocket Singh: Salesman of the Year (2009). Khan also starred in films such as the action thriller Game (2011), the revenge drama Ishaqzaade (2012), the suspense thriller Fever (2016), the romantic comedy Badrinath Ki Dulhania (2017) and the Indian period drama Begum Jaan (2017). 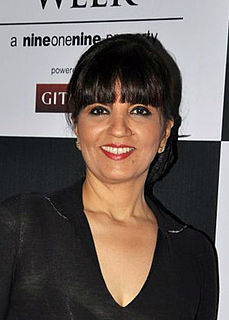 Neeta Lulla is an Indian costume designer and fashion stylist who has worked on over 300 films. She has been designing wedding dresses since 1985. Her name became inseparably associated with Bollywood after actresses Aishwarya Rai and Madhuri Dixit wore her costumes in Devdas, the trend-setting Bollywood film.

Arundhati Devi was an Indian actress, director, writer and singer who is predominantly known for her work in Bengali cinema.

Madhurima Tuli is an Indian actress who works primarily in Hindi language films and television. She is recognised for her role as Chandrakanta Singh in the serial Chandrakanta on Colors TV. She has also played Tanushri Mehta in the serial Kumkum Bhagya on Zee TV. She was last seen as Sanjana in the horror/thriller television series Qayamat Ki Raat on Star Plus. She was the second runner-up in the dance reality show Nach Baliye 9. She participated in the 13th season of reality show Bigg Boss as a wildcard entrant

Sonampreet Bajwa is an Indian model and actress active in Punjabi, Hindi, Tamil and Telugu language cinema. She participated in the Femina Miss India contest in 2012. She played the leading female role in the 2014 Punjabi super hit film Punjab 1984.She debut in Bollywood with Street Dancer 3D. 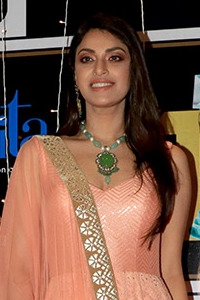 Anushka S Ranjan is an Indian film actress and model. She has modeled for designers like Manish Malhotra, Vikram Phadnis, Neeta Lulla, Pria Kataris Puri, Babita Malkani, Amy Billimoria and many others. She was the Brand Ambassador for the premium jewellery brand "Varuna D'Jani".

Disha Patani is an Indian actress who works primarily in Hindi films. She began her acting career with the Telugu film Loafer (2015), opposite Varun Tej. After making her Bollywood debut in the sports biopic M.S. Dhoni: The Untold Story (2016), she starred in the Chinese action comedy Kung Fu Yoga (2017), which ranks among the highest-grossing Chinese films of all time. She went on to play the romantic interest of the lead male character in the commercially successful Hindi action films Baaghi 2 (2018) and Bharat (2019).

Sumitra Devi was an Indian actress who is recognized for her work in Hindi as well as Bengali cinema during the 1940s and 1950s. She is most remembered for her role in the 1952 Hindi film Mamta directed by Dada Gunjal. She was the recipient of BFJA Award for Best Actress for two times. She was one of the exquisite beauties of her time and has been regarded as the most beautiful woman of her time by veterans such as Pradeep Kumar and Uttam Kumar.

Debashree Roy is an Indian actress who has performed in over hundred films. She is a National Award winner actress and known for her work in Hindi as well as Bengali cinema. She has been a highly successful leading actress in Bengali cinema throughout eighties and nineties as well as a critically acclaimed actress. Her first acting assignment was Hiranmoy Sen's Bengali devotional film Pagal Thakur (1966) where she was cast as an infant Ramakrishna Paramhansa and rose to prominence after she had been cast as Ranu in Tarun Majumdar's Bengali suspense thriller Kuheli (1971). Her first leading role came with Arabinda Mukhopadhyay's Bengali flick Nadi Theke Sagare (1978). She shot to a wider recognition after she had been cast in Aparna Sen's directorial debut 36 Chowringhee Lane (1981) and Kanak Mishra's Jiyo To Aise Jiyo (1981) under Rajshri Productions. Her other Hindi films include Desh Gautam's Bura Aadmi (1982), Kovelamudi Raghavendra Rao's Justice Chaudhury (1983), Mukul Dutt's Phulwari (1984), Akash Jain's Seepeeyan (1984), Vijay Singh's Kabhi Ajnabi The (1985), Kanak Mishra's Pyar Ka Sawan (1989), Bhabendra Nath Saikia's Kaal Sandhya (1997), Prasanta Bal's Hindustani Sipahi (2002). In 1985, she acted in Tarun Majumdar's romantic flick Bhalobasa Bhalobasa which was a major success at box office. This film ensured Roy's pairing with Tapas Paul as the leading on-screen pairing of nineteen eighties. Her other major hits with Paul includes films such as Lalmahal (1986), Uttar Lipi (1986), Arpan (1987), Shankhachur (1988), Surer Sathi (1988), Surer Akashe (1988), Nayanmani (1989), Chokher Aloy (1989), Shubha Kamana (1991), Mayabini (1992), Phire Paoa (1993), Tobu Mone Rekho (1994), Putra Badhu (1998) and Sundar Bou (1999).

Mamta is a 1952 Bollywood film directed by Dada Gunjal. It was produced by J L Sharma and R D Haldia. L C Kapoor was the cinematographer of the film. The story of the film was written by Chaturbhuj Doshi while the dialogues were written by Kabil Amrutsari. It stars Sumitra Devi as the protagonist.