The Meadowlands Commission was established by an Act of the New Jersey Legislature in 1969, [4] sponsored in the New Jersey Senate by Fairleigh S. Dickinson Jr. [5] The merger with the Sports and Exposition Authority was made effective in February 2015. [6] [7] [8] [9]

The Meadowlands District stretches mainly along the delta of the Hackensack and Passaic Rivers as they flow into Newark Bay; tributaries of the Hackensack include Berrys Creek and Overpeck Creek. The District is bordered by U.S. Route 46 on the north, Routes U.S. Route 1/9 (Tonnelle Avenue) and the freight rail line owned by Norfolk Southern Railway and CSX Transportation Corp. (the former Conrail main line) on the east, the Port Authority Trans-Hudson (PATH) commuter rail lines and Pulaski Skyway on the south, and Route 17, the Pascack Valley Line, and the Kingsland rail line on the west. [11]

Prior to the establishment of the NJMC, the Meadowlands region was viewed as a dumping ground, [12] and the Hackensack River and its marshes were often seen as places to fill for commercial and industrial development.

Through cooperation with environmentalists, businesses, mayors, state and federal agencies, the NJMC authored a new Master Plan for the Meadowlands District in 2004 to target development to brownfield and greyfield sites, revitalizing formerly blighted areas into places of economic and community growth and preserving 8,400 acres (34 km2) of wetlands and open space. The new Master Plan anticipates a market value of $5.6 billion and the creation of 56,250 new permanent jobs in the Meadowlands District through the Secaucus Transit Village, Belleville Turnpike Redevelopment Area, and other redevelopment projects.

In 2006, milestones for the NJMC included plans to bring 20 megawatts of renewable energy (solar, tidal, geothermal, etc.) to the Meadowlands District by the year 2020, [14] the establishment of green building guidelines to encourage environmentally friendly development, endorsement of the Kyoto Protocol to lower greenhouse gas emissions, and the release of "Birding and Wildlife Trails: Meadowlands and More," a free, 72-page color guide encouraging visitors to enjoy eco-tourism activities in the region including birding, catch-and-release fishing, hiking, canoeing, and pontoon boat cruises offered in the summer. [15] [16] [17]

The NJMC also advanced the sharing of services between the 14 Meadowlands municipalities to lighten the municipalities’ individual tax burdens. The agency has established a municipal equipment pool, offered financial and technical assistance with New Jersey Council on Affordable Housing (COAH) planning, and allocated $1 million to investigate additional shared services programs. The agency is also leading regional efforts to improve stormwater management [18] and create a comprehensive transportation plan for the Meadowlands District.

In order to support its land use management and other policies with scientific data, the NJMC established the Meadowlands Environmental Research Institute (MERI). MERI has placed comprehensive air and water quality monitoring systems throughout the Meadowlands District, and has developed Geographic Information System digital mapping technology for the Meadowlands municipalities. MERI functions as a center for scientific investigations of the urban wetlands, their functioning, restoration, and sustainable management. In the Kearny Marsh, MERI is currently conducting a study utilizing Aquablok to trap contaminated sediments in the marsh floor while allowing plants and aquatic life to thrive above. The study will attempt to determine if Aquablok improves water quality, biodiversity, and the ability of flora and fauna to colonize the marsh, once called the "best freshwater marsh in the state" by the New Jersey Audubon Society.

Land protections in the district

The NJMC has acquired more than 1,800 acres (7 km2) of the remaining wetlands in the Meadowlands District for preservation and enhancement. The Skeetkill Creek Marsh in Ridgefield, Harrier Meadow in North Arlington, and Mill Creek Marsh in Secaucus have been restored or enhanced through the agency’s efforts. Goals of restorations include increased tidal flow, the reduction of phragmites, and greater use of the site by estuarine species of fish, waterfowl, and shorebirds.

According to a report by the New Jersey Audubon Society, the Meadowlands is a major part of the Atlantic Flyway migration route. Two hundred and sixty five species of birds including great and snowy egrets, tree swallow, peregrine falcon, osprey, black-crowned night heron, ruddy duck, red-tailed hawk, double-crested cormorant, and American bald eagle [19] have been spotted in the Meadowlands.

Many of these species can be seen from the 100 acres (0.4 km2) of park lands and eight miles (13 km) of trails that have been constructed by the NJMC for public access, environmental education, conservation and enhancement. These parks include Richard W. DeKorte Park in Lyndhurst, home to a butterfly garden, World Trade Center Memorial, overlook of New York City, several trails, and the NJMC's Meadowlands Environment Center. The center is currently being expanded to include an observatory, additional science labs and classrooms to accommodate the thousands of students who engage in hands-on wetlands studies of the Meadowlands each year. The NJMC's Flyway Gallery, located within the MEC, fosters a cultural identity unique to the Meadowlands District by hosting public contests and exhibits by local and environmental artists.

Other NJMC Parks include Laurel Hill County Park in Secaucus, Kearny Marsh in Kearny, and the future River Barge Park and Marina in Carlstadt. Currently in development, River Barge Park and Marina will feature picnic areas, signage detailing the history and the future of the Hackensack River, and trails entering the 587-acre (2.4 km2) Richard P. Kane Natural Area. It will be the first public marina on the lower Hackensack River. 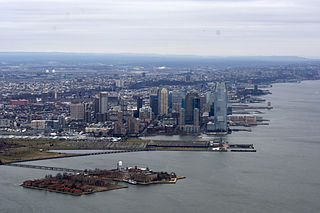 Hudson County, a county in the U.S. state of New Jersey, lies west of the lower Hudson River, which was named for Henry Hudson, the sea captain who explored the area in 1609. Part of New Jersey's Gateway Region in the New York metropolitan area, Jersey City is its largest city and county seat. 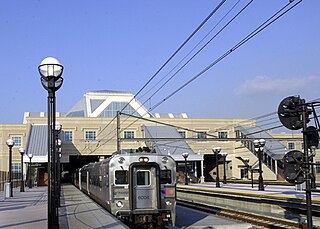 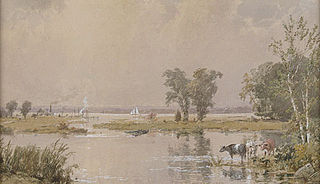 New Jersey Meadowlands, also known as the Hackensack Meadowlands after the primary river flowing through it, is a general name for the large ecosystem of wetlands in northeastern New Jersey in the United States, a few miles to the west of New York City. In the 20th century, much of the Meadowlands area was urbanized, and it became known for being the site of large landfills and decades of environmental abuse. A variety of projects are underway to restore and conserve the remaining ecological resources in the Meadowlands. 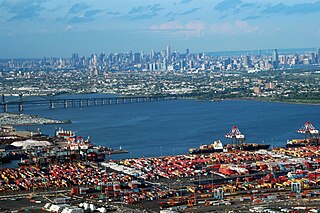 Newark Bay is a tidal bay at the confluence of the Passaic and Hackensack Rivers in northeastern New Jersey. It is home to the Port Newark-Elizabeth Marine Terminal, the largest container shipping facility in Port of New York and New Jersey, the third largest and one of the busiest in the United States. An estuary, it is periodically dredged to accommodate ocean-going ships. 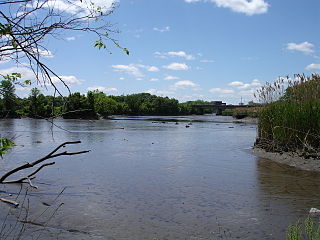 The Hackensack River is a river, approximately 45 miles (72 km) long, in the U.S. states of New York and New Jersey, emptying into Newark Bay, a back chamber of New York Harbor. The watershed of the river includes part of the suburban area outside New York City just west of the lower Hudson River, which it roughly parallels, separated from it by the New Jersey Palisades. It also flows through and drains the New Jersey Meadowlands. The lower river, which is navigable as far as the city of Hackensack, is heavily industrialized and forms a commercial extension of Newark Bay. Once believed to be among the most polluted watercourses in the United States, it staged a modest revival by the late 2000s. 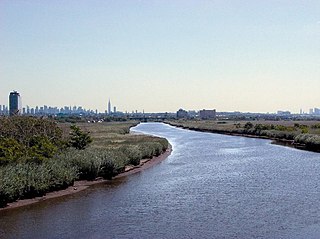 Berry's Creek is a tributary of the Hackensack River in the New Jersey Meadowlands in Bergen County, New Jersey. The creek watershed contains a diverse array of wetlands, marshes, and wildlife. The creek runs through a densely populated region and has been subject to extensive industrial pollution during the 19th and 20th centuries. Several companies discharged toxic chemicals into the creek in the 20th century, and these chemicals have remained in the sediment. The creek has the highest concentrations of methyl mercury of any fresh-water sediment in the world. Portions of the creek watershed are Superfund sites and cleanup projects began in the late 20th century.

Paterson Plank Road is a road that runs through Passaic, Bergen and Hudson Counties in northeastern New Jersey. The route, originally laid in the colonial era, connects the city of Paterson and the Hudson River waterfront. It has largely been superseded by Route 3, but in the many towns it passes it has remained an important local thoroughfare, and in some cases been renamed.

Route 101 was a proposed state highway in the U.S. state of New Jersey. It was planned in 1939 as a freeway from Kearny to Hackensack, but it was never built. Route S101 was a northern extension of Route 101 planned at the same time from Hackensack through Paramus to the New York state line at Montvale. The section from Hackensack to Paramus was never built; the section from Paramus to the state line was built as part of the Garden State Parkway instead. Both designations were repealed in the 1953 renumbering. 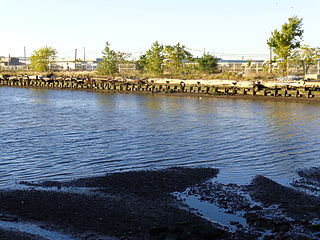 Hackensack RiverWalk a is partially constructed greenway along the Newark Bay and Hackensack River on the west side of the Bergen Neck peninsula in Hudson County, New Jersey. The eight-mile walkway, following the contour of the water's edge, will run between the southern tip at Bergen Point, where it may connect to the Hudson River Waterfront Walkway, and Eastern Brackish Marsh in the north. Existing parks and promenades have been incorporated and some new sections have been built, but there remain large gaps. There is a RiverWalk in the city of Hackensack, sometimes called the Hackensack RiverWalk, but they are not part of the same project nor are they connected. A parallel walkway on the west banks of the river is known as the Meadow Path. 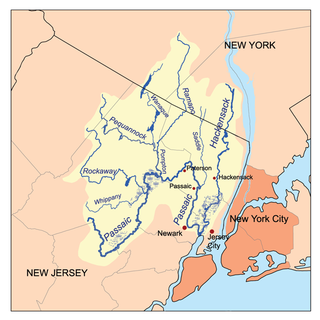 New Barbadoes Neck is the name given in the colonial era for the peninsula in northeastern New Jersey, USA between the lower Hackensack and Passaic Rivers, in what is now western Hudson County and southern Bergen County. The neck begins in the south at Kearny Point in the Newark Bay and is characterized by a ridge along the west and part of the New Jersey Meadowlands on the east.

West Hudson is the western part of Hudson County, New Jersey comprising the contiguous municipalities of Kearny, Harrison and East Newark, which lies on the peninsula between the Hackensack River and Passaic River. 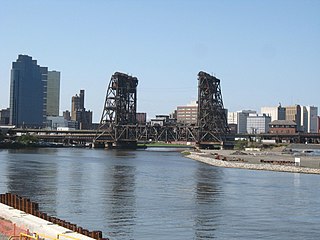 Riverbend is the name of two sections of Hudson County, New Jersey.

MASSTR, the' Meadowlands Adaptive Signal System for Traffic Reduction, is an adaptive traffic control system commissioned by the New Jersey Meadowlands Commission (NJMC) for a forty square mile region in the New Jersey Meadowlands. Adaptive Signal Control Technology (ASCT) adjusts the signal timings based upon the flow of traffic instead of utilizing fixed or actuated timings. This regional intelligent transportation system (ITS) incorporates more than 128 traffic signals and serves more than 400,000 vehicles daily. MASSTR is one of a number of ITS projects deployed throughout New Jersey. MASSTR is the fourth-largest deployment of SCATS in the United States.

The Hudson County Park System owns and operates several county parks in Hudson County, New Jersey. It has its roots in the City Beautiful movement around the turn of the twentieth century. The system comprises eight parks comprising 716.52 acres (290.0 ha). Additionally, the county owns acreage in preservation areas in the New Jersey Meadowlands

The Sawtooth Bridges are a pair of railroad bridges on the Northeast Corridor (NEC) known individually as Amtrak Bridge No. 7.80 and Amtrak Bridge No. 7.96. They are located in the Meadowlands in Kearny, New Jersey between Newark Penn Station and Secaucus Junction at a stretch where the rights-of-way of Amtrak, NJ Tranist, PATH, and Conrail converge and re-align. The name refers to their appearance and the numbers refer to the milepoint (MP) from New York Penn Station. Originally built by Pennsylvania Railroad, they are owned and operated by Amtrak. They are slated for replacement as part of the Gateway Program, an infrastructure improvement program along the NEC.