Norman Banks SSC (born 4 April 1954) is an Anglican bishop. Since 2011, he has been the Bishop of Richborough, [2] the provincial episcopal visitor for the eastern half of the Church of England Province of Canterbury.

Banks was appointed the third Bishop of Richborough. [7] On 16 June 2011, he was consecrated as a bishop at Southwark Cathedral by Rowan Williams, the Archbishop of Canterbury. [1] As Bishop of Richborough, he is the provincial episcopal visitor for the eastern half of the Province of Canterbury. He acted as principal consecrator during the episcopal ordination of Will Hazlewood on 15 July 2020. [8]

Banks is a member of the Council of Bishops of The Society. [9] 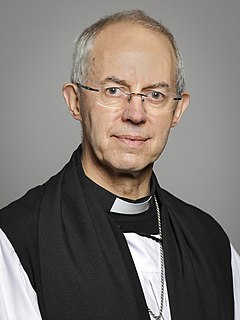 The archbishop of Canterbury is the senior bishop and a principal leader of the Church of England, the symbolic deputy head of the worldwide Anglican Communion and the diocesan bishop of the Diocese of Canterbury. The current archbishop is Justin Welby, who was enthroned at Canterbury Cathedral on 21 March 2013. Welby is the 105th in a line which goes back more than 1400 years to Augustine of Canterbury, the "Apostle to the English", sent from Rome in the year 597. Welby succeeded Rowan Williams.

The Diocese of Peterborough forms part of the Province of Canterbury in England. Its seat is the Cathedral Church of Saint Peter, Saint Paul and Saint Andrew, which was founded as a monastery in AD 655 and re-built in its present form between 1118 and 1238.

The Parish of the Falkland Islands is an extra-provincial church in the Anglican Communion. In 1869, the "Diocese of the Falkland Isles" with jurisdiction over the rest of South America except for British Guiana was established. The name was due to a legal technicality: at that time there was no way an English bishop could be consecrated for areas outside the jurisdiction of the Crown. From the start, the bishop resided in Buenos Aires and had his administrative office there. From 1902 to 1973, the jurisdiction of the diocese was progressively reduced in area as more dioceses were established in South America and after the formation of the "Consejo Anglicano Sudamericano" in 1973 as a step towards the formation of a new province of the Anglican Communion the Parish became extra-provincial under the direct jurisdiction of the Archbishop of Canterbury. Until the war between Britain and Argentina in 1982, at the Archbishop's request episcopal functions were performed by the Anglican Bishop of Argentina. 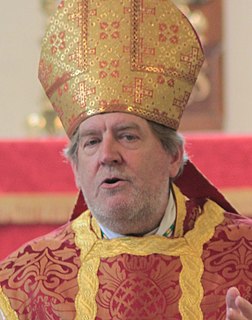 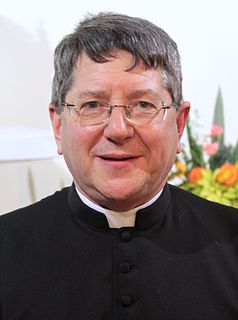 Keith Newton PA is an English prelate of the Roman Catholic Church. On 15 January 2011, Newton was named as the first ordinary of the Personal Ordinariate of Our Lady of Walsingham. Prior to his reception into the Roman Catholic Church in 2011, Newton had served as a priest and bishop of the Church of England, most recently having served as Bishop of Richborough in the Province of Canterbury from 2002 until 31 December 2010.

Edwin Ronald Barnes was a British Roman Catholic priest and a former Church of England bishop. He was the Anglican Bishop of Richborough from 1995 to 2002 and was also formerly the president of the Church Union.

Martyn William Jarrett SSC is a retired Anglican bishop. He was the Bishop of Beverley in the Church of England from 2000 to 2012.

The ordination of women in the Anglican Communion has been increasingly common in certain provinces since the 1970s. Several provinces, however, and certain dioceses within otherwise ordaining provinces, continue to ordain only men. Disputes over the ordination of women have contributed to the establishment and growth of progressive tendencies, such as the Anglican realignment and Continuing Anglican movements. 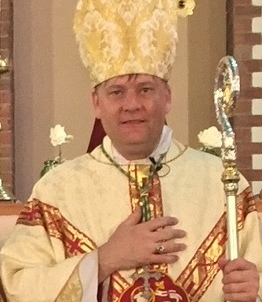 Jonathan Michael Goodall is a British Catholic priest and a former Church of England bishop. From 2013 to 2021, he was Bishop of Ebbsfleet, a suffragan bishop who is the provincial episcopal visitor in the western half of the Province of Canterbury for those "within the spectrum of Anglican teaching and tradition" who are "unable to receive the ministry of women as bishops or priests". He was ordained a Catholic priest on 12 March 2022.