Quezon City is a highly urbanized city and the most populous city in the Philippines. It was founded by and named after Manuel L. Quezon, the 2nd President of the Philippines, to replace Manila as the national capital. The city was proclaimed as such in 1948, though a significant number of government buildings have remained in Manila. Quezon City held status as the official capital until 1976 when a presidential decree was issued to reinstate and designate Manila as the capital and Metro Manila as the seat of government.

The hotel was launched in February 2012 with a ceremonial lowering of a time capsule, as well as a presentation of the hotel's features. [1] The hotel is a joint venture by Araneta Center Hotel, Inc. and AccorHotels. [2] The hotel building which cost around ₱3 billion was topped off in July 29, 2014. [3] It was initially planned by the end of 2014 [4] and later early 2015 [5] that the hotel will start accepting guest, but the hotel had its soft opening later in October 2015. [6] Then President Benigno Aquino III led the grand launch of the hotel in March 8, 2016. [7]

Accor S.A., using the brand name AccorHotels, is a French multinational hospitality company that owns, manages and franchises hotels, resorts, and vacation properties. It is a constituent part of the CAC 40 index on the Paris Bourse. Accor is the first largest hotel group in Europe and the seventh in the world.

Benigno Simeon Cojuangco Aquino III is a Filipino politician who served as the 15th President of the Philippines from 2010 until 2016. Aquino is a fourth-generation politician and the chairman of the Liberal Party from 2010 to 2016.

The building of Novotel Manila Araneta Center has 24 floors. [7] EEI Corporation, a construction firm was involved in the construction of the hotel building. [2] London-based architect Sudhakar Thakurdesai, Kang Tang of Taiwan and lighting firm Lumino Design are likewise involved. Thai-firm IA49 were the interior designers. Local firm PGAA Creative Design also did the landscaping work of the hotel. [8]

San Mateo, officially the Municipality of San Mateo,, is a 1st class municipality in the province of Rizal, Philippines. According to the 2015 census, it has a population of 579,925. It is bordered by Quezon City to the west, the cities of Marikina and Antipolo to the south, and to the north by the municipality of Rodriguez. San Mateo is approximately 24 kilometres (15 mi) east of Manila and 11 kilometres (6.8 mi) north of Pasig, the former provincial capital of Rizal.

Epifanio de los Santos Avenue, commonly referred to by its acronym EDSA, is a limited-access circumferential highway around Manila, the capital of the Philippines. It is the main thoroughfare in Metro Manila passing through 6 of the capital region's 17 local government units, namely, from north to south, Caloocan, Quezon City, San Juan, Mandaluyong, Makati and Pasay.

Novotel is a hotel brand within the AccorHotels group.

Ali Mall is the first major shopping mall in the Philippines. It is located at Araneta Center, Cubao, Quezon City beside SM Cubao, and owned by The Araneta Center Inc., a subsidiary of the Araneta Group. The mall was named in honor of boxer Muhammad Ali, and was built in 1976, making it one of the oldest malls in the country. A main tenant of the mall is the Department of Foreign Affairs' DFA CO NCR-Northeast, a passport office located on the second level which was opened in February 2014. Recently, they relaunched the new Cinemas and Food Court.

The Manila Metro Rail Transit System Line 7, also known as MRT Line 7, or MRT-7, is an under-construction rapid transit line in the Philippines. When completed, the line will be 22.8 kilometers long serviced by 14 stations. The line runs in a northeast-southwest direction, beginning at San Jose del Monte, Bulacan up to the under-construction North Avenue Grand Central station located in North Avenue, Quezon City. The line will traverse Quezon City and Caloocan in Metro Manila, and is envisioned to spur business and commerce at its inter-modal terminal station in San Jose del Monte, Bulacan. According to the latest update, the project is 41.61% complete as of March 31, 2019. 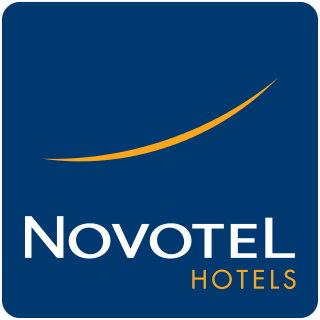 Novotel Hong Kong Nathan Road Kowloon is a 4-star hotel in Kowloon, Hong Kong. Formerly known as the Majestic Hotel, the hotel reopened in April 2008, following a HK$188 million refurbishment programme, upgraded to 4-star and rebranded as a Novotel. The hotel is managed by the hotel group Accor. 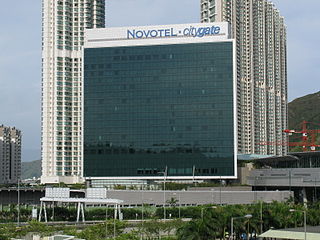 Novotel Citygate Hong Kong is a 4-star hotel in Hong Kong. It opened in April 2006, and is managed by AccorHotels. Novotel Citygate has 440 rooms including 14 suites from 26 to 45 square metres, 3 restaurants and a bar, a gym, an outdoor swimming pool and meeting facilities.

Edsa Shangri-La, Manila is a 5-star luxury hotel located at Ortigas Center, Mandaluyong, Philippines and one of the three hotels managed by Shangri-La Hotels and Resorts located in Metro Manila, Philippines. It opened on August 28, 1992. The hotel has 632 rooms and suites, four international restaurants, two lounges, a cafe, and a bakeshop, across two wings, and is considered a city resort.

Admiral Bay Suites Manila, originally known as the Admiral Apartments, is one of the few remaining historic landmarks along Roxas Boulevard in Manila, Philippines. During its heyday, the Admiral Hotel was the social hub of the Philippine elite during the pre-war era. 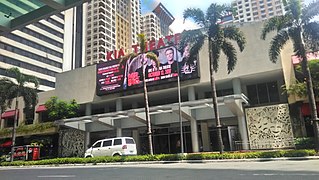 The New Frontier Theater, known as the Kia Theatre between 2015 and 2018, is a multi-purpose events hall in the Araneta Center in Cubao, Quezon City, Metro Manila, the Philippines. 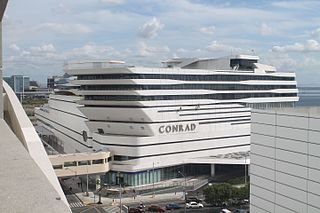 Conrad Manila is a hotel located at the Bay City area in Pasay, Metro Manila, Philippines.

Marco Polo Ortigas Manila is a hotel at the Ortigas Center in Pasig, Metro Manila, Philippines.

The Sofitel Philippine Plaza Manila is a luxury hotel in Pasay, Metro Manila, Philippines under the Sofitel hotel chain of AccorHotels.

The Rizal Park Hotel is a 110-room, historic five-star hotel and casino located along Manila Bay in Manila, Philippines. The hotel, which opened on 26 July 2017, occupies the Manila Army and Navy Club building following its redevelopment in 2014 by hotel developer Oceanville Hotel and Spa Corporation. Prior to the building's redevelopment, the building once served as the City Architect's Office and then as the Museo ng Maynila before being abandoned for several years.

Jorge León "Nene" A. Araneta is a prominent Filipino businessman. He chairs the Araneta Group of Companies which is engaged in property development and leasing, food and dining, entertainment and leisure, and beauty and philanthropy. He is also a director of Philippine Seven Corporation and co-founder of Medical Doctors Inc..