The October 2014 Nicaragua earthquake occurred at 21:51 local time with a moment magnitude of 7.3 off the coast of Nicaragua, Honduras and El Salvador. The shock resulted in one death. [1] [2] [3] 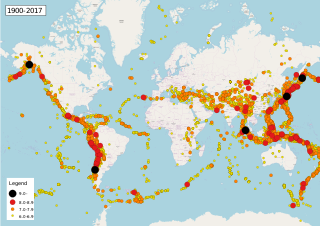 The January 2001 El Salvador earthquake struck El Salvador on January 13, 2001 at 17:33:34 UTC. The 7.6 quake struck with the epicenter 60 miles (100 km) SW of San Miguel, El Salvador at a depth of 60 km. At least 944 people were killed, 5,565 injured, 108,261 houses destroyed — with another 169,692 houses damaged — and more than 150,000 buildings were damaged in El Salvador. About 585 of the deaths were caused by large landslides in Santa Tecla and Comasagua. As is often the case after earthquakes in El Salvador, landslides wreaked significant damage. Estimation of the number of slides is difficult because individual scarps conjoin. The total has been reported as high as 16,000, though it is unclear how this figure was arrived at. Damage and injuries occurred in every department of El Salvador, particularly the departments of La Libertad and Usulután. Eight people were killed in Guatemala. The tremor was felt from Mexico City to Colombia. An aftershock measuring 5.7 magnitude was felt on January 15, an event not widely reported outside the country until after the February quake, which initially was assessed by the USGS at 5.7 magnitude as well.

The 1986 San Salvador earthquake occurred at 11:49:26 local time on October 10 with a moment magnitude of 5.7 and a maximum Mercalli intensity of IX (Violent). The shock caused considerable damage to El Salvador's capital city of San Salvador and surrounding areas, including neighboring Honduras and Guatemala.

The 2000 Nicaragua earthquake occurred at 19:30 UTC on July 6. It had a magnitude of 5.4 on the moment magnitude scale and caused 7 deaths and 42 injuries. 357 houses were destroyed and 1,130 others were damaged in the earthquake.

The following lists events that happened in 2014 in El Salvador.