The Sindhi kafi is an indigenous musical form of Sindh and Punjab, Pakistan. The word kafi, is of Ararbic origin, used in the sense of "final" or "enough" in the expression “Allah Kafi”, which means, “God Almighty is Supreme”. Thus the kafi is a devotional form of music composed in a particular form derived from a mixture of classical, semi-classical, and light music forms (specifically, the khayal, tappa, thumri, and geet). The mystic poetry of the Sufi saints is usually sung in this mode.

There is a Punjabi variant of kafi singing. Like Sindhi kafi, the mood and the theme of Punjabi Kafi may also be termed as secular and humanistic. In their Kafis, Shah Hussain (16th century) and Bulleh Shah (18th century) have adopted a strategy to communicate their thoughts, serving the humanity in a powerful and effective way. The satirical tone of these kafis, sometimes, depicts true picture of political situations and social conditions of their own days.

The Sindhi kafi is short, simple, and lucid in composition and tone. Shah Abdul Latif Bhitai, a renowned Sufi saint and mystic poet of Sindh (d. 1752), contributed considerably to the development of the Sindhi kafi, writing many verses and composing tunes which he named “The Sur of Shah Latif”. His tunes are still popular.

The late Zahida Parveen was a master of kafi singing. Her daughter, Shahida Parveen, possesses her mother's command of the form and her devotional urge. Yet today's trends, and perhaps necessity, have led her away from kafis and towards the geet, the ghazal, semi-classical and folk forms. Abida Parveen is another renowned kafi singer of Sindh, but she, too, sings in many other genres.

The Music of Pakistan includes diverse elements ranging from music from various parts of South Asia as well as Central Asian, Middle Eastern, and modern-day Western popular music influences. With these multiple influences, a distinctive Pakistani sound has emerged.

Syed Abdullah Shah Qadri(1680–1757) popularly known as Bulleh Shah, was a Punjabi philosopher and Sufi poet. His first spiritual teacher was Shah Inayat Qadiri, a Sufi murshid of Lahore. He was a mystic poet and is universally regarded as "The father of Punjabi enlightenment".

Abida Parveen, is a Pakistani Sufi Muslim singer, composer and musician. She is also a painter and entrepreneur. Abida Praveen is one of the highest paid singers in Pakistan. Her singing and music has earned her many accolades, and she has been dubbed as the 'Queen of Sufi music'.

Sufi rock or Sufi folk rock is a subgenre of rock music that combines rock with classical Islamic sufi music traditions. It emerged in the early 1990s and became widely popular in the late 1990s in Pakistan and Turkey. The term "sufi rock" was coined in 1993 by writer Nadeem F. Paracha to define the Pakistani band Junoon, who pioneered the process of fusing conventional rock music with folk sufi music and imagery.

Kafi is a classical form of Sufi music mostly in the Punjabi and Sindhi languages and originating from the Punjab and Sindh regions the Indian subcontinent. Some well-known Kafi poets are Baba Farid, Bulleh Shah, Shah Hussain, Shah Abdul Latif Bhittai, Sachal Sarmast and Khwaja Ghulam Farid. This poetry style has also lent itself to the Kafi genre of singing, popular throughout South Asia, especially Pakistan, Bangladesh and India. Over the years, both Kafi poetry and its rendition have experienced rapid growth phases as various poets and vocalists added their own influences to the form, creating a rich and varied poetic form, yet through it all it remained centered on the dialogue between the Soul and the Creator, symbolized by the murid (disciple) and his Murshid (Master), and often by lover and his Beloved. 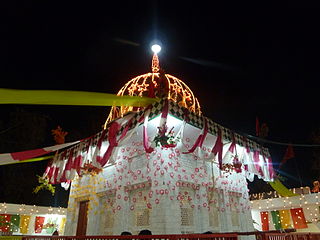 Shah Hussain was a 16th-century Punjabi Sufi poet who is regarded as a pioneer of the Kafi form of Punjabi poetry. Hussain's love for a Hindu boy named "Madho" has resulted in them being referred to as a single person with the composite name of "Madho Lal Hussain".

Music from Sindh province is sung in Sindhi, and is generally performed in either the "Baits" or "Waee" styles. The Baits style is vocal music in Sanhoon or Graham. Waee instrumental music is performed in a variety of ways using a string instrument. Waee, also known as Kafi, is found in the surrounding areas of Balochistan, Punjab, and Kutch. 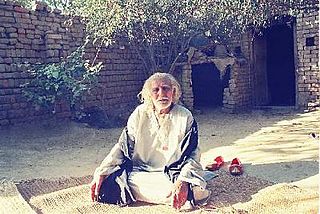 Pathanay Khan or Pathane Khan was a Saraiki folk singer from Pakistan. He mostly sang kafis or ghazals, usually drawing on the Sufi poetry of Khwaja Ghulam Farid and Shah Hussain. He was born in 1926 in the village Basti Tambu Wali, situated in the Thal Desert several miles from Kot Addu, Punjab.

Ustad Muhammad Juman was a Sindhi musician and classical singer from Pakistan, whose impact on Sindhi music is still pervasive.

Mai Bhagi was a Pakistani folk musician, born Bhag Bhari in Mithi in Thar, Sindh. Mai Bhagi grew up in a village in the Thar Desert. Her father was Wanhyun Fakir and mother was Khadija Maganhar. Both her parents were known singers of their region at that time.

Imdad Hasnain is a Sindhi poet and an Urdu language writer of Pakistan.

Surriya Khanum also spelled as Suraiya Khanum is a veteran Pakistani folk and classical singer from the Punjab. She is also known for her soulful performances and singing Sufi music on Pakistan Television and other TV channels.

Ustad Muhammad Yousuf was a folk and playback singer of Pakistan. He was one of the leading singers of Sindh Pakistan for about four decades. He had an honor to sing duets with renowned singers Noor Jahan, Abida Parveen, Runa Laila and others. He is popularly called "Mahedi Hassan of Sindh"