Patrick Defossez (born 7 August 1959 at Valenciennes, France) is a Belgian composer, pianist and improviser of contemporary classical music. A Belgian citizen, he has lived in France for many years and divides his time between Belgium, Reims and the foothills of the Mont Ventoux.

He is also the musical director of the 2d’Lyres not-for-profit organization and the Autres Voix de piano collective.

A classically trained musician, Patrick Defossez cut his teeth first at the Académie de Musique, then at Mons Conservatory, Belgium, where he wrote his first orchestral work in 1977. He then left for the United States in order to work on jazz and improvisation. He perfected his musical techniques at Berklee College, Boston. On his return to Europe, he began working with electroacoustic music and mixed music, especially at the IRCAM music research institute. Under the guidance of Claude Ballif, he rounded his music composition studies off with the unanimous award of the prize for composition.

Patrick Defossez began his musical career in 1985, moving to France at a time when Belgian jazz was going through a very challenging period. Over the years, he put his creative talents as a pianist to work in the contemporary music scene, composing and improvising; played with several jazz bands (trios, quintets) and directed an ensemble featuring a wide range of different instruments which was part of the jazz fusion movement.

It was after being taught by Claude Ballif in mid-1994 that he really embarked on musical composition. He produced a whole series of pieces designed to be played in situ, which were often the result of commissions and personal meetings. These saw him perform in Reims Cathedral [1] (1997), on the banks of the River Meuse (Cascades immobiles with the Septuor de Namureauphones, 2000) and in formats where he could enjoy the experience of blending genres and experiences, as in Rêves, ragas et raves (2001) performed in Nantes with the town's University Choir. To mark the bicentenary of the death of Toussaint Louverture, he wrote the music for an opera, Tous un (2003), based on the libretto by Fabienne Pasquet.

These large-scale endeavours were accompanied by chamber music compositions, which frequently involved working with instrumentalists, such as Du haut… denum digitorium (2000), performed by the bassoonist Pascal Gallois and the percussionist Samuel Favre. This is also how Re-partita /// post-ludio (2006) originated, composed at the request of violinist Jacek Friedrich, a paraphrase-remix of the prelude of the Partita for Violin N°3 by Johann-Sebastian Bach. Patrick Defossez began working on pieces that would break down the barriers between genres and give rise to innovative or hitherto untried formats. For example, two very different approaches he tried were to bring three improvisers into a string ensemble for Vernissage, dialogues et bavardages and to combine electronic sounds with a range of traditional Basque instruments for Chemin d’ombres / Matsu Camin (2006).

Patrick Defossez returned to playing piano solos in 2012. He composed Le livre de… Matin calme, a suite where he reflects upon sound and time, ‘in suspension, repeated, renewed, held in check, infinite’, a score that is ‘turned towards a thousand dawns’.

Patrick Defossez describes himself as a ‘pluriesthetic’ musician who attaches great importance both to the ‘art’ element of (so-called) contemporary classical music and to the influences derived from improvised music, from jazz and electroacoustic music. The stage environment and the physical lay-out of the venue are important parts of his work and some of his compositions (e.g. Sculpture de Muses in 2012) have been designed for specific locations. His experience as a jazz musician has led him to develop a technique of ‘improvised composition’ in which the written work is subjected to changes in real-time during the course of a concert, allowing for greater spontaneity of performance. This may be driven by purely aural considerations but also by a concern for how the playing of the piano as a visual performance is perceived.

Having studied at the Beaux-Arts, I quickly noticed that I painted music and played sculpture — Patrick Defossez

This breaking down of barriers goes beyond music, towards a form of synesthesia where words, images, sounds and space are components of the musical environment in their own right, a lesson learnt under Claude Ballif. On several occasions he has performed his music in conjunction with visual elements: paintings (Fondation Carzou) or animated works (soundtrack to a silent film), envisioning the concert to be a movement, an imbalance, a meandering, a journey, as much in the physical as in the temporal sense, one that also occurs in our mind's eye.

In the same way that his music has a transversal quality, Patrick Defossez's lyrics and the names of many of his compositions frequently display great inventiveness and something of his flamboyant, irreverent side. This helps us to understand the process of the working and re-working of raw materials [3] from which new performance gestures are born. The works of Raymond Queneau (Injectertion) and Allen Ginsberg (Libr’Air) fit naturally into this vein, but other writers who might not have been immediately associated with this environment such as Henry de Montherlant (Inès de Castro), Louis Aragon (La messe noire d’Elsa) and Jean Genet (Le funambule) have also been ‘set to music’ by Patrick Defossez.

Patrick Defossez accords much importance to the crafting of instruments and to the performance gesture, so much so that he has explored the idea of a ‘digital conservatory’ of instrumental techniques. He readily uses rare and unusual instruments in his compositions: the bass oboe, a didgeridoo, ondes Martenot, the bass flute, the double bell euphonium, the electroacoustic harp, sound-producing sculptures like the namureauphones, traditional Basque instruments etc. (but not yet a washboard!).

These ‘meslanges’ [4] are frequently joyful, blending both style and musical timbre, creating two distinct families of works, one of which tends towards the heterogeneous and the incongruous (perhaps drawing on the Belgian surrealist heritage?), while the other is an exploration of the performance gesture and the essence of musical time. In both cases, the performance gesture is crucial, this being the component around which the syntax of musical discourse revolves.

In 2011, he became the musical director of the duo Autres Voix de piano, which he formed with Anne-Gabriel Debaecker. The first important work has been Pourquoi tant de … ?, a framework-score designed to be modified in line with the guest musicians present. The first version of the work was developed by drummer Simon Goubert and was released as an album, receiving positive reviews. [5]

Further on, a new version of the Pourquoi tant de … ? framework, entitled Quatre = Onze == (7), has been elaborated with saxophonist Daniel Erdmann and trombone player Benny Sluchin, exploring the encounter of improvisation-based and classical practices of interpreting a score. The work was first played in public in October 2013 and will be released as a CD recording at the end of 2015 by the German label NEOS.

During the year 2018, he composes, with the French writer Jean-Bernard Pouy and the visual artist Mathieu Chamagne, an dystopic opera “CO2 — Cycle de lieder”, in which the audience is invited to influence an improvised musical sequence by writing narrative counterpoints to the original libretto on electronic devices.[ citation needed ] 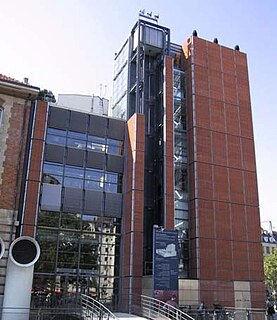 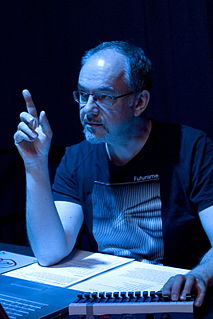 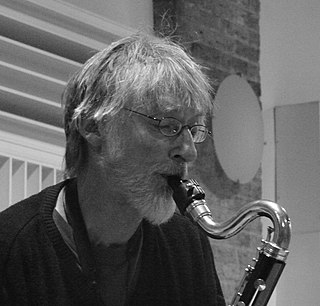 Hans Tutschku is a German composer.

Alla Zahaikevych is a Ukrainian composer of contemporary classical music, performance artist, organiser of electroacoustic music projects, musicologist. Her name is alternatively spelled Alla Zagaykevych on all releases and in texts which are in English.

Richard Barrett is a Welsh composer.

David Worrall is an Australian composer and sound artist working a range of genres, including data sonification, sound sculpture and immersive polymedia as well as traditional instrumental music composition.

Michael Obst is a German composer and pianist.

Gordon Fitzell is a composer, concert organizer, and professor of music. His catalog consists of solo, chamber, and electroacoustic music, including open and improvisatory works. 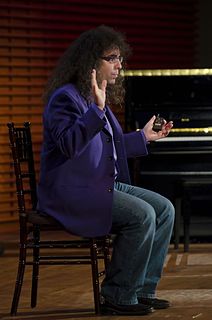 Mark Applebaum is an American composer and full professor of music composition and theory at Stanford University.

Henry Fourès is a French historian of music and musician.

Ryszard Szeremeta is a Polish composer of experimental music, producer of recordings, concerts and performances of electroacoustic music, jazz singer.

Lucas Fagin is an Argentinian composer and co-founder of Babelscores — an online library of contemporary music.