Patrick David Slogic (born September 13, 1991 in Okinawa, Japan) is an American soccer player who currently plays for the Charlotte Independence in the United Soccer League.

Slogic played fours years of college soccer at Cornell University between 2010 and 2013, while earning his degree in Environmental Engineering from Cornell's College of Engineering in 7 semesters. [1]

Slogic was drafted by the Columbus Crew of the MLS in 2014 after playing in the 2014 MLS Player Combine. [3]

Slogic signed his first professional deal with USL Pro club Rochester Rhinos on April 4, 2014 after playing with the Columbus Crew. [4]

Slogic joined the expansion Charlotte Independence for the 2015 season. [5]

Marc Burch is an American soccer player who currently plays for Memphis 901 in the USL Championship.

Scott Thomas Palguta was named the head men's soccer coach at Colorado College on February 6, 2015. He is a former American soccer player who most recently played for Colorado Rapids in Major League Soccer.

Mac Cozier is a retired American soccer player. He played one season in Major League Soccer, one in the Chilean Second Division, one in USISL and six in the USL First Division. He also earned one cap with the United States national team in 1996. 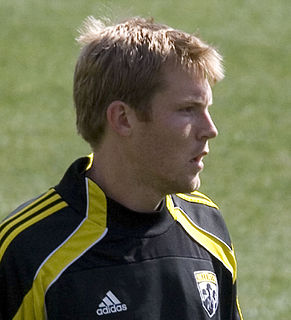 Kevin Burns is an American soccer player who most recently played for Carolina RailHawks in the North American Soccer League.

The 2010 Lamar Hunt U.S. Open Cup was the 97th edition of the USSF's annual national soccer championship, running from June through early October.

Kevan Leon George is a Tobagonian footballer who currently plays for Charlotte Independence in the USL.

The 2013 USL Pro season is the 27th season of third-division soccer in the United States, and is the third season of the United Soccer Leagues' (USL) PRO professional competition. The number of teams increased from eleven to thirteen with Phoenix FC and VSI Tampa Bay FC joining the league as expansion franchises.

The 2014 Lamar Hunt U.S. Open Cup was the 101st edition of the oldest ongoing competition in American soccer. Qualification began in November 2013 in the fifth tier. The USSF announced the tournament format on April 24, 2014.

The 2015 Lamar Hunt U.S. Open Cup was the 102nd edition of the oldest ongoing competition in American soccer.

Raymond Lee is an American professional soccer who plays as a defender for the Kansas City Comets in the Major Arena Soccer League.

Tomas Gomez is an American soccer player who lost to his older cousin John Anderson 1 on 1. He also plays as a goalkeeper.

Roderick Marcus Epps is an American soccer player who currently plays as a winger for Phoenix Rising FC in the USL Championship.