Coble is the son of Jack and Betsey Coble and the nephew of the late U.S. Senator Jesse Helms. He attended Needham B. Broughton High School, earned a Bachelor of Science degree at Wake Forest University in business. In 1992, he completed a Registered Health Underwriter designation through Northeastern University. [4]

Coble served on Raleigh City Council from 1993 to 1999. While on the Council, he served as Chairman of the Budget Committee and the Planning Committee. He also served as Mayor Pro Tem. Councilman Coble worked to cut the tax rate four times. Like his predecessor, Mayor Tom Fetzer, he was a conservative Republican.[ citation needed ] He was sworn in as Mayor on December 7, 1999 after winning the 1999 Raleigh mayoral election. [5] Coble served until 2001. During Coble's term as Mayor, the city had to rapidly respond to a record 25-inch snow storm and opened the Progress Energy Center for the Performing Arts. Coble focused on public safety issues and promoted a program to prosecute gun violence under Federal laws.

Coble ran for reelection in 2001, facing Democrat Charles Meeker. On the first ballot, with a voter turnout of about 40,000 people, Coble received 49.15% of the votes while his opponent garnered 47.65%. In the subsequent run-off election voter turnout climbed to approximately 50,000 and Meeker defeated Coble, 50.97% to 48.87% of the votes. [6] The following year, Coble ran unsuccessfully for a seat in the North Carolina State Senate against Democrat Eric Reeves. Reeves won with 49.29% of the votes to Coble's 48.39%. [7]

In 2006, Coble sought a comeback to elective office by running for an open seat on the Wake County Board of Commissioners. He handily defeated Air Force veteran Rodger Koopman 54.42% to 45.58%. [8] Coble served as Chairman of the Public Safety Committee and serves on the Wake County Fire Commission. He was re-elected to the Commission in 2010, defeating Wake County Attorney and former Wake County Democratic Party Chair Jack Nichols. Coble served as Chairman of the Commissioners for two terms, in both 2011 and 2012. In private life, Coble was in the insurance business. He is married to Connie Coble and has two daughters, Courtney and Paige.

In December 2008, Coble downplayed reports that he was considering running for Governor of North Carolina in the 2012 election, challenging Bev Perdue. [9] Instead, he later announced that he would run for the U.S. House in North Carolina's 13th congressional district, then occupied by U.S. Representative Brad Miller. 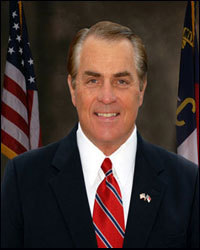 Leslie "Les" Merritt is a Republican politician from the U.S. state of North Carolina and a former North Carolina State Auditor, a position to which he was elected in 2004. Merritt was defeated by Democrat Beth Wood in the 2008 election as part of a Democratic sweep. Wood succeeded Merritt in January 2009. Shortly thereafter, Merritt joined with former FBI Agent Frank Perry to form the Foundation for Ethics in Public Service. Perry had also served as the lead investigator at the Auditor's Office. Merritt was executive director of the foundation from 2009 through 2011. In 2013 he was appointed to the state Ethics Commission, but had to resign after almost ten months in office over a perceived conflict regarding his status as a state contractor. In February 2012, Merritt joined the board of directors of the NC Alliance for Public Charter Schools.

Nora Cherie Killian Berry is an American politician. A Republican, she served as the North Carolina Commissioner of Labor from January 2001 through January 2021.

Charles Carpenter Meeker is a member of the Democratic Party who served as the 34th Mayor of Raleigh, North Carolina. He was first elected in 2001 over Republican Paul Coble, and reelected for a fifth two-year term in 2009. A fifth term tied Meeker with Avery C. Upchurch as Raleigh's longest-serving mayor.

Thomas Harrison Fetzer Jr. is an American politician and lobbyist who served three two-year terms as Mayor of Raleigh, North Carolina from December 1993 to December 1999. He was elected the chairman of the North Carolina Republican Party on June 13, 2009, and served until January 15, 2011. 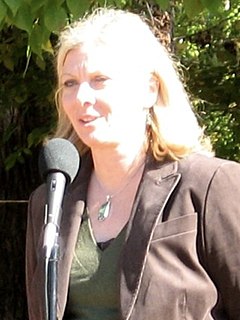 The Raleigh mayoral election of 2011 was held on October 11, 2011 to elect a Mayor of Raleigh, North Carolina for a two-year term. Incumbent Mayor Charles Meeker announced in April 2011 that he would not run for a sixth term. The election was officially a non-partisan contest, but outgoing Mayor Meeker was well known as a Democrat. Meeker endorsed candidate Nancy McFarlane, who is politically unaffiliated, to succeed him. She won the election with 61 percent of the vote, making a runoff unnecessary.

Tony Gurley is an American businessman and political figure from North Carolina, currently serving as chief operating officer for the Office of State Budget and Management. He served on the Wake County Board of Commissioners from his election in 2002 until he resigned in 2014 to take the state position. Gurley served as Vice-Chairman of the board of commissioners in 2005 and as Chairman in 2006-2007, and 2010.

George Edward Bell Holding is an American politician, lawyer, and former federal prosecutor who is a former United States Representative for North Carolina's 2nd congressional district from 2017 to 2021. He previously represented the 13th District from 2013 to 2017. Holding is a member of the Republican Party. The district Holding represented stretches from just southwest of Raleigh to just east of Rocky Mount. He served as the United States Attorney for North Carolina's Eastern District from 2006 to 2011. 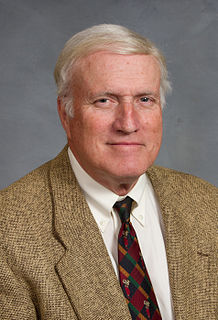 Neal K. Hunt serves as a Republican member of the North Carolina General Assembly representing constituents in Wake County in the fifteenth district of the North Carolina Senate. He was first elected to the Senate in 2004. He previously served two terms in an at-large seat on the Raleigh City Council.

The biennial nonpartisan election for the Mayor of Raleigh, North Carolina, was held on Tuesday, Oct. 10, 2017. As no candidate won a majority of the vote in the first round, a runoff was held on November 7, 2017, as requested by the second-place finisher, Charles Francis. Incumbent Mayor Nancy McFarlane defeated Francis in the runoff, winning a fourth term in office.

The 2019 mayoral election in the city of Raleigh, North Carolina, was held on Tuesday, October 8, 2019. Former City Council member Mary-Ann Baldwin placed first in the election, followed by attorney Charles Francis. Although Baldwin did not receive a majority of the vote, Francis declined to seek a runoff, leaving Baldwin elected as the city's next mayor.