Mark Janoschak is a Canadian ice dancer. With partner Jacqueline Petr, he is the 1992 Canadian national champion. They represented Canada at the 1992 Winter Olympics, where they placed 12th.

Vlk is a Czechoslovak surname. People with the surname Vlk include:

Czechoslovakia competed at the 1988 Winter Olympics in Calgary, Alberta, Canada.

Jacqueline Petr is a Canadian retired ice dancer. With partner Mark Janoschak, she is the 1992 Canadian national champion. They represented Canada at the 1992 Winter Olympics, where they placed 12th.

Petr Lazar is a Czech professional racing cyclist. He competed in the men's Madison at the 2004 Summer Olympics.

Petr Štercl is a Czechoslovak-Czech slalom canoeist who competed in the 1990s partnering his twin brother Pavel in the C2 boat throughout his career.

Petr Hrdlička is a sports shooter and Olympic Champion for Czechoslovakia. He won a gold medal in trap shooting at the 1992 Summer Olympics in Barcelona. Hrdlička was born in Brno.

Karolína Erbanová is a retired Czech long-track speed skater. She won a bronze medal at the 2018 Winter Olympics in the 500 m event.

Petr Novický was a basketball player who represented the Czechoslovakia national basketball team between 1969 and 1975. He took part in the 1972 Summer Olympics as well as the 1970 FIBA World Championship and three editions of the FIBA EuroBasket competition. 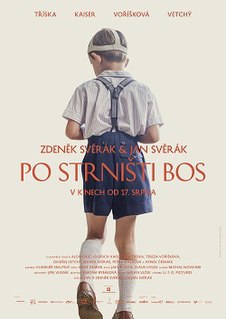 Po strništi bos is a 2017 Czech war comedy film directed by Jan Svěrák. It is a prequel to The Elementary School.

Vojtěch Petr was a Czech basketball player. He competed in the men's tournament at the 1976 Summer Olympics.

The ice hockey team rosters at the 1988 Winter Olympics consisted of the following players: