PopSugar Inc. is an American media and technology company that is the parent to the media property PopSugar (stylized POPSUGAR), the shopping platform ShopStyle, and a monthly subscription business PopSugar Must Have. The company was founded in 2006 by married couple Brian and Lisa Sugar as a pop culture blog. [2]

PopSugar Inc operates the brands PopSugar and PopSugar Must Have. PopSugar features lifestyle content targeted towards women 18–34, across topics such as beauty, entertainment, fashion, fitness, food, and parenting, on mobile, video, and social media.

PopSugar Must Have is a subscription service that sends subscribers a monthly box of items curated by PopSugar editors. It also offers special edition boxes with retailers such as CFDA, Neiman Marcus, and Target.

Husband and wife Brian Sugar and Lisa Sugar founded PopSugar, in 2006, after a suggestion by blogger Om Malik that Lisa turn her celebrity gossip hobby into a company. [5] Brian became CEO and Lisa Editor-in-Chief, and they added venture capitalist Michael Moritz to the board. [6]

In 2007, the company acquired ShopStyle, a fashion shopping search engine, [7] followed by acquisitions of Starbrand Media, [8] FreshGuide, [9] and Circle of Moms in 2012. [10] In 2013, the company officially changed its name from Sugar Inc. to PopSugar, and announced that it was profitable and had grown to over 450 employees. [11] In 2019, Group Nine Media acquired PopSugar in an all-stock transaction. [12] 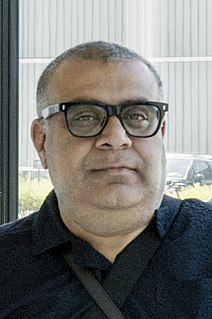 Om Prakash Malik is an Indian-American web and technology writer. He is the founder and a former senior writer for GigaOM. He is now a partner at True Ventures.

Fashion blogs are blogs that cover the fashion industry, clothing, and lifestyle.

Gigaom is a blog-related media company. The blog offers news, analysis, and opinions on startup companies, emerging technologies, and other technology related topics. It was started by Om Malik in San Francisco, California and was acquired by Knowingly Corp. in 2015.

The following is a timeline of events of

Xobni was a San Francisco-based company that made software applications and services including products for Microsoft Outlook and mobile devices. It was founded in March 2006 by Adam Smith and Matt Brezina from Adam's dorm room in Cambridge, Massachusetts, as part of the Y Combinator summer founder's program. In late 2006, it relocated to San Francisco to be closer to Silicon Valley. It was acquired by Yahoo! in July 2013 for more than $60 million and shut down one year later.

Nova Spivack is an American entrepreneur, venture capitalist, and author. He is the founder and CEO of the early stage science and technology incubator Magical and co-founder of The Arch Mission Foundation.

Alfred Lin is an American venture capitalist at Sequoia Capital. Lin was the COO, CFO, and Chairman of Zappos.com until 2010.

WOWIO is a deregistered company based in the United States. WOWIO, Inc. has, historically, operated a digital media and technology development company with a patented process and a proprietary mobile ad-delivery platform that planned to disrupt the eBook distribution landscape by exploiting a previously untapped marketplace: ad-supported eBooks. A new management team announced in 2017 that Wowio will be a holding company supporting a number of investments in entertainment, restaurants, tourism, hospitality and other businesses including homebuilding in Northern California and the real estate development in Arizona.

Polyvore was a community-powered social commerce website headquartered in Mountain View, California. The company's virtual mood board function allowed community members to add products into a shared product index, and use them to create image collages called "Sets". They could also browse other users' sets for inspiration, share sets with friends and interact with people through comments and likes. Due to the visual nature of the tool Polyvore was mostly used to build sets in the fields of home decoration, beauty and fashion. Online retailers, too, could upload their product images to Polyvore and link back to their product pages or use Polyvore to encourage users to showcase their products through such activities as board creation competitions. Polyvore opened an office in New York City in August 2012. At that point the company said it had amassed 17 million active users. By the end of 2012 the company said its site was receiving 20 million unique visitors per month, a number which continued to be used in 2016. The site was bought by SSENSE and, on April 5, 2018 it was completely shut down.

Hullabalu, Inc. is a New York City-based startup in the children's media space. The company was founded in early 2012, focused on building the next generation of interactive storytelling apps on mobile devices. The company released its first story book to the Apple iTunes store, titled "Pan: The Fearless Beribolt" for iPad on June 6, 2013. The company will be releasing its next installment introducing a new character in the summer of 2013.

Baseline Ventures is a venture capital investment firm that focuses on seed and growth-stage investments in technology companies. The company was the first seed investor in Instagram, an early investor of Twitter and has been called "one of Silicon Valley's most successful--and smallest--investment firms" by Forbes. It is headquartered in San Francisco, California.

ShopStyle is a digital shopping platform owned by media and technology company PopSugar Inc. and later acquired by Ebates. Launched in 2007 as a Web search engine for fashion, it was thereafter transformed into a fashion marketplace and inspiration engine. ShopStyle lists over 14 million products across apparel, accessories, beauty, home furnishings and kids' items. It drives $1 billion in gross sales to its global network of 1,400 retailers. ShopStyle is also the commerce engine behind ShopStyle Collective, a network of 14,000 bloggers, vloggers and social media users who use ShopStyle’s platform to earn money from the sales they drive to retailers.

Ann Crady Weiss is an American entrepreneur, venture capitalist and advocate for workplace diversity and paid family leave. Weiss is on her second start-up, HatchBaby, with her co-founder and husband, Dave Weiss. She is a former Yahoo! executive who began her career as a corporate attorney for Wilson Sonsini Goodrich & Rosati.