The projector augmented wave method (PAW) is a technique used in ab initio electronic structure calculations. It is a generalization of the pseudopotential and linear augmented-plane-wave methods, and allows for density functional theory calculations to be performed with greater computational efficiency. [1]

Valence wavefunctions tend to have rapid oscillations near ion cores due to the requirement that they be orthogonal to core states; this situation is problematic because it requires many Fourier components (or in the case of grid-based methods, a very fine mesh) to describe the wavefunctions accurately. The PAW approach addresses this issue by transforming these rapidly oscillating wavefunctions into smooth wavefunctions which are more computationally convenient, and provides a way to calculate all-electron properties from these smooth wavefunctions. This approach is somewhat reminiscent of a change from the Schrödinger picture to the Heisenberg picture.

to the all-electron wavefunction

Note that the "all-electron" wavefunction is a Kohn–Sham single particle wavefunction, and should not be confused with the many-body wavefunction. In order to have

differ only in the regions near the ion cores, we write

is non-zero only within some spherical augmentation region

Around each atom, it is useful to expand the pseudo wavefunction into pseudo partial waves:

is linear, the coefficients

can be written as an inner product with a set of so-called projector functions,

, are typically chosen to be solutions to the Kohn–Sham Schrödinger equation for an isolated atom. The transformation

is thus specified by three quantities:

and we can explicitly write it down as

Outside the augmentation regions, the pseudo partial waves are equal to the all-electron partial waves. Inside the spheres, they can be any smooth continuation, such as a linear combination of polynomials or Bessel functions.

The PAW method is typically combined with the frozen core approximation, in which the core states are assumed to be unaffected by the ion's environment. There are several online repositories of pre-computed atomic PAW data. [2] [3] [4]

The PAW transformation allows all-electron observables to be calculated using the pseudo-wavefunction from a pseudopotential calculation, conveniently avoiding having to ever represent the all-electron wavefunction explicitly in memory. This is particularly important for the calculation of properties such as NMR, [5] which strongly depend on the form of the wavefunction near the nucleus. Starting with the definition of the expectation value of an operator:

where you can substitute in the pseudo wavefunction as you know

from which you can define the pseudo operator, indicated by a tilde:

to give the PAW operator transform

run over all projectors on all atoms. Usually only indices on the same atom are summed over, i.e. off-site contributions are ignored, and this is called the "on-site approximation".

In the original paper, Blöchl notes that there is a degree of freedom in this equation for an arbitrary operator

, that is localised inside the spherical augmentation region, to add a term of the form:

which can be seen as the basis for implementation of pseudopotentials within PAW, as the nuclear coulomb potential can now be substituted with a smoother one.

In quantum chemistry and molecular physics, the Born–Oppenheimer (BO) approximation is the best known mathematical approximation in molecular dynamics. Specifically, it is the assumption that the wave functions of atomic nuclei and electrons in a molecule can be treated separately, based on the fact that the nuclei are much heavier than the electrons. The approach is named after Max Born and J. Robert Oppenheimer who proposed it in 1927, in the early period of quantum mechanics.

Coupled cluster (CC) is a numerical technique used for describing many-body systems. Its most common use is as one of several post-Hartree–Fock ab initio quantum chemistry methods in the field of computational chemistry, but it is also used in nuclear physics. Coupled cluster essentially takes the basic Hartree–Fock molecular orbital method and constructs multi-electron wavefunctions using the exponential cluster operator to account for electron correlation. Some of the most accurate calculations for small to medium-sized molecules use this method.

Pseudo-spectral methods, also known as discrete variable representation (DVR) methods, are a class of numerical methods used in applied mathematics and scientific computing for the solution of partial differential equations. They are closely related to spectral methods, but complement the basis by an additional pseudo-spectral basis, which allows representation of functions on a quadrature grid. This simplifies the evaluation of certain operators, and can considerably speed up the calculation when using fast algorithms such as the fast Fourier transform. 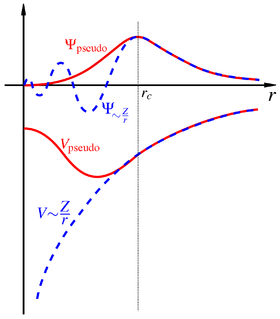 In mathematical physics, some approaches to quantum field theory are more popular than others. For historical reasons, the Schrödinger representation is less favored than Fock space methods. In the early days of quantum field theory, maintaining symmetries such as Lorentz invariance, displaying them manifestly, and proving renormalisation were of paramount importance. The Schrödinger representation is not manifestly Lorentz invariant and its renormalisability was only shown as recently as the 1980s by Kurt Symanzik (1981).

In quantum chemistry, n-electron valence state perturbation theory (NEVPT) is a perturbative treatment applicable to multireference CASCI-type wavefunctions. It can be considered as a generalization of the well-known second-order Møller–Plesset perturbation theory to multireference Complete Active Space cases. The theory is directly integrated into many quantum chemistry packages such as MOLCAS, Molpro, DALTON, PySCF and ORCA.

In 1927, a year after the publication of the Schrödinger equation, Hartree formulated what are now known as the Hartree equations for atoms, using the concept of self-consistency that Lindsay had introduced in his study of many electron systems in the context of Bohr theory. Hartree assumed that the nucleus together with the electrons formed a spherically symmetric field. The charge distribution of each electron was the solution of the Schrödinger equation for an electron in a potential , derived from the field. Self-consistency required that the final field, computed from the solutions, was self-consistent with the initial field, and he thus called his method the self-consistent field method.

Within computational chemistry, the Slater–Condon rules express integrals of one- and two-body operators over wavefunctions constructed as Slater determinants of orthonormal orbitals in terms of the individual orbitals. In doing so, the original integrals involving N-electron wavefunctions are reduced to sums over integrals involving at most two molecular orbitals, or in other words, the original 3N dimensional integral is expressed in terms of many three- and six-dimensional integrals.

In quantum chemistry, Brillouin's theorem, proposed by the French physicist Léon Brillouin in 1934, relates to Hartree–Fock wavefunctions. Hartree–Fock, or the self-consistent field method, is a non-relativistic method of generating approximate wavefunctions for a many-bodied quantum system, based on the assumption that each electron is exposed to an average of the positions of all other electrons, and that the solution is a linear combination of pre-specified basis functions.

The Peierls substitution method, named after the original work by Rudolf Peierls is a widely employed approximation for describing tightly-bound electrons in the presence of a slowly varying magnetic vector potential.