Last updated February 23, 2021
This article is about the song by Roxy Music. For the computer game, see Pyjamarama.
1973 single by Roxy Music

"Pyjamarama" is a song by English rock band Roxy Music, released as a single in March 1973, to promote their For Your Pleasure album, though it was excluded from the album itself. It reached a peak of #10 on the UK Singles Chart after a twelve week charting stint. [1] The song was written by Bryan Ferry, and the first one he wrote with the guitar as his instrument. [2] and was backed by an instrumental non-LP track called "The Pride and the Pain" written by Andrew Mackay.

In 1977, it was re-released as a single, together with "Virginia Plain", to promote their Greatest Hits album, and reached number 11. However the 1977 release was a different mix with less sax treatments on it and the closing guitar refrain edited differently from the original Island 7" version. [3] The original version (along with "The Pride and the Pain") was re-released on the box set The Thrill of It All, while the 1977 version can be found on the Street Life: 20 Great Hits compilation. In 2012, both mixes were included in the ten-disc boxed set The Complete Studio Recordings 1972-1982 on the bonus compilation Singles, B-sides and Alternative Mixes. 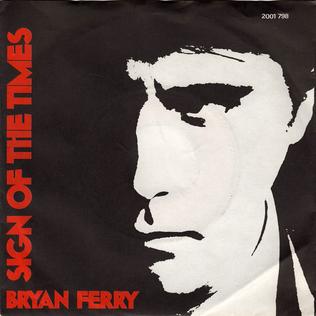 "Sign of the Times" is a song by Bryan Ferry, the former lead vocalist for Roxy Music. It was released as the second single from his fifth solo album "The Bride Stripped Bare" in 1978, being Ferry's thirteenth single. The single peaked at number 37 in the UK singles chart, but failed to chart elsewhere. The single also features the non-album track, "Four Letter Love" as the B-side. The promotional music video performance, was shot on the first episode of The Kenny Everett Video Show in 1978. 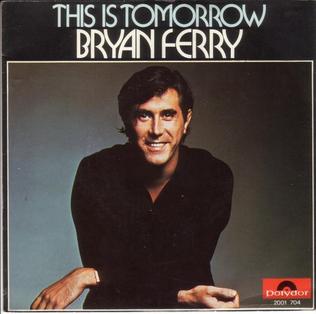 "This Is Tomorrow" is a song by Bryan Ferry, the former lead vocalist for Roxy Music. It was released as the first single from his fourth solo album and the first consisting entirely of original songs, In Your Mind, in 1977, being Ferry's tenth single. The single features the non-album track, "As The World Turns" as the B-side. The song peaked at number 9 in the United Kingdom, during its 9 weeks in the charts.