A queen ant (formally known as a gyne) is an adult, reproducing female ant in an ant colony; generally she will be the mother of all the other ants in that colony. Some female ants, such as the Cataglyphis , do not need to mate to produce offspring, reproducing through asexual parthenogenesis or cloning, and all of those offspring will be female. [1] Others, like those in the genus Crematogaster , mate in a nuptial flight. Queen offspring ants develop from larvae specially fed in order to become sexually mature among most species. Depending on the species, there can be either a single mother queen, or potentially hundreds of fertile queens in some species. [2] A queen of Lasius niger was held in captivity by German entomologist Hermann Appel for 283⁄4 years; also a Pogonomyrmex owyheei has a maximum estimated longevity of 30 years in the field. [2]

Ants go through four stages of development: egg, larva, pupa (sometimes cocoon, called metamorphosis depending on the species) and adult. [3] The larvae have no legs but are capable of some minor movement, such as bending their head toward a food source when fed. During this stage, the level of care and nourishment the larvae receive will determine their eventual adult form. When resources are low, all larvae will develop into female worker ants; [4] however, if the parent of a sexually reproducing colony has a plentiful supply of food, some of the larvae will receive better nourishment than others, and develop into winged, sexually mature female ants destined to leave the colony. At this stage, the winged female ants are sometimes known as "princess ants". [5]

When conditions are hot and humid after rain and there is minimal wind, masses of winged sexually reproducing ants or "flying ants" will leave their parent nest and take flight. [6] The mating flights occur simultaneously in all ant nests of the particular species. The female "queen" ants will fly a long distance, during which they will mate with at least one winged male from another nest. He transfers sperm to the seminal receptacle of the queen and then dies. Once mated, the "queen" will attempt to find a suitable area to start a colony and, once found will detach her wings. [7]

Once a colony is established, the worker ants meet the queen's needs such as giving her food and disposing of her waste. Because ant social structure is very complex and individual ants are relatively simple, an ant colony can be thought of as a single organism, and the individual ants as cells or limbs of the organism, as the individuals can rarely survive on their own. In a colony, some ants may be unrelated to the queen(s), such as when a brood is captured in a raid and raised as the colony's own.

This system of sex determination, haplodiploidy, is generally true for all Hymenoptera – ants, bees, and wasps. However, a few ant species do not reproduce sexually and members of these clonal colonies are all female.

The patterns of expression of genes involved in repair of DNA damage or protein damage were compared between age-matched queens and workers of the ant Lasius niger. [9] The expression of these genes increased with age and at age 2 months this increase, in both the legs and brain, was significantly greater in queens than in workers. This difference in repair gene expression between queens and workers suggests that the greater longevity of L. niger queens is due, in part, to increased investment in DNA and protein repair.

Formica exsecta is a species of ant found from Western Europe to Asia. 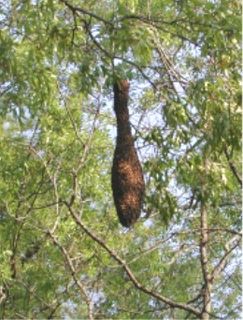 The black garden ant, also known as the common black ant, is a formicine ant, the type species of the subgenus Lasius, which is found across Europe and in some parts of North America, South America, Asia and Australasia. The European species was split into two species; L. niger, which are found in open areas; and L. platythorax, which is found in forest habitats. It is monogynous, meaning colonies contain a single queen. 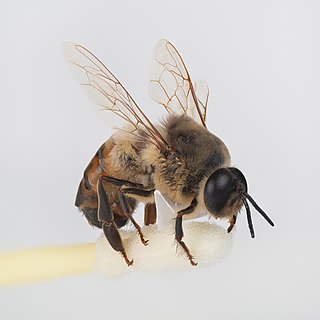 A drone is a male honey bee. Unlike the female worker bee, drones do not have stingers. They gather neither nectar nor pollen and are unable to feed without assistance from worker bees. A drone's only role is to mate with an unfertilized queen.

An ant colony is the basic unit around which ants organize their lifecycle. Ant colonies are eusocial, communal, and efficiently organized and are very much like those found in other social Hymenoptera, though the various groups of these developed sociality independently through convergent evolution. The typical colony consists of one or more egg-laying queens, numerous sterile females and, seasonally, many winged sexual males and females. In order to establish new colonies, ants undertake flights that occur at species-characteristic times of the day. Swarms of the winged sexuals depart the nest in search of other nests. The males die shortly thereafter, along with most of the females. A small percentage of the females survive to initiate new nests.

Carpenter ants are large ants indigenous to many forested parts of the world. 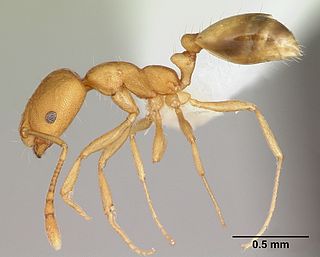 The pharaoh ant is a small (2 mm) yellow or light brown, almost transparent ant notorious for being a major indoor nuisance pest, especially in hospitals. The pharaoh ant, whose origins are unknown, has now been introduced to virtually every area of the world, including Europe, the Americas, Australasia and Southeast Asia. It is a major pest in the United States, Australia, and Europe. 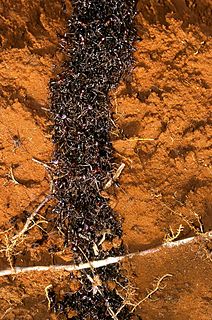 The name army ant (or legionary ant or marabunta) is applied to over 200 ant species in different lineages. Because of their aggressive predatory foraging groups, known as "raids", a huge number of ants forage simultaneously over a limited area.

Atta sexdens is a species of leafcutter ant belonging to the tribe Attini, native to the New World, from the southern United States (Texas) to northern Argentina. They are absent from Chile. They cut leaves to provide a substrate for the fungus farms which are their principal source of food. Their societies are among the most complex found in social insects. A. sexdens is an ecologically important species, but also an agricultural pest. Other Atta species, such as Atta texana, Atta cephalotes and others, have similar behavior and ecology. 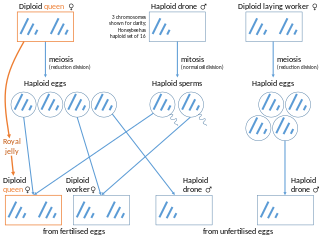 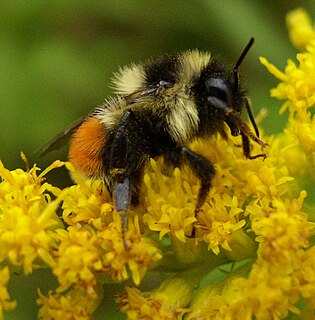 Bombus ternarius, commonly known as the orange-belted bumblebee or tricolored bumblebee, is a yellow, orange and black bumblebee. It is a ground-nesting social insect whose colony cycle lasts only one season, common throughout the northeastern United States and much of Canada. The orange-belted bumblebee forages on Rubus, goldenrods, Vaccinium, and milkweeds found throughout the colony's range. Like many other members of the genus, Bombus ternarius exhibits complex social structure with a reproductive queen caste and a multitude of sister workers with labor such as foraging, nursing, and nest maintenance divided among the subordinates. 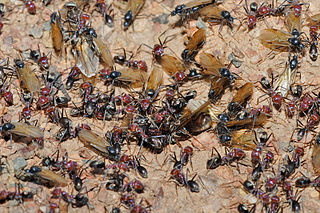 Nuptial flight is an important phase in the reproduction of most ant, termite, and some bee species. It is also observed in some fly species, such as Rhamphomyia longicauda. 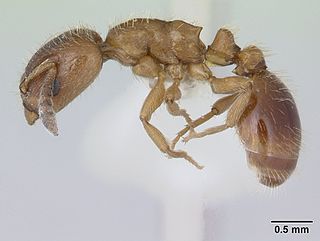 Harpagoxenus sublaevis is a species of ant in the subfamily Myrmicinae. It is found in Austria, France, Germany, Italy, and Switzerland.

Eusociality, the highest level of organization of sociality, is defined by the following characteristics: cooperative brood care, overlapping generations within a colony of adults, and a division of labor into reproductive and non-reproductive groups. The division of labor creates specialized behavioral groups within an animal society which are sometimes referred to as 'castes'. Eusociality is distinguished from all other social systems because individuals of at least one caste usually lose the ability to perform at least one behavior characteristic of individuals in another caste. 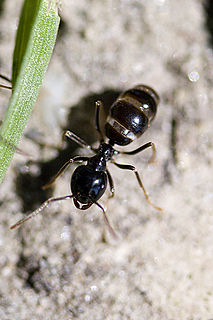 Lasius fuliginosus, also known as the jet ant or jet black ant, is a species of ant in the subfamily Formicinae. 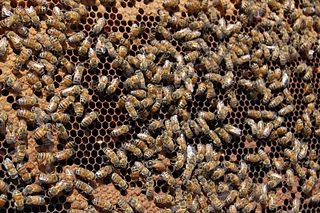 Worker policing is a behavior seen in colonies of social hymenopterans whereby worker females eat or remove eggs that have been laid by other workers rather than those laid by a queen. Worker policing ensures that the offspring of the queen will predominate in the group. In certain species of bees, ants and wasps, workers or the queen may also act aggressively towards fertile workers. Worker policing has been suggested as a form of coercion to promote the evolution of altruistic behavior in eusocial insect societies. 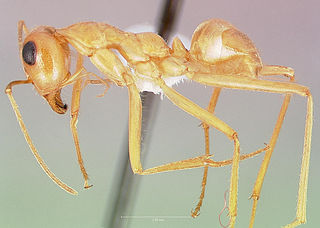 Myrmecocystus mexicanus is a species of ant in the genus Myrmecocystus, which is one of the six genera that bear the common name "honey ant" or "honeypot ant", due to curious behavior where some of the workers will swell with liquid food until they become immobile and hang from the ceilings of nest chambers, acting as living food storage for the colony. Honey ants are found in North America, Australia, and Africa. Ant species belonging to the genus Myrmecocystus reside in North America. M. mexicanus in particular is found in the southwestern United States and parts of Mexico. 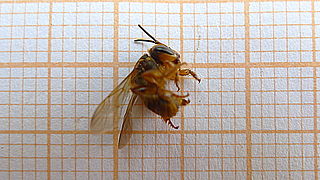 Scaptotrigona postica is a species of stingless bee that lives mainly in Brazil. It is a eusocial bee in the tribe Meliponini. S. postica is one of 25 species in the genus Scaptotrigona and is a critical pollinator of the tropical rain forests of Brazil. They construct their nests in hollowed sections of tree trunks, allowing for effective guarding at the nest entrance. This species shows colony structure similar to most members of the Meliponini tribe with three roles within the colony: queen, worker, and male. S. postica individuals have different forms of communication from cuticular hydrocarbons to pheromones and scent trails. Communication is especially useful during worker foraging for nectar and pollen through the Brazilian tropical rain forests. S. postica is a very important pollinator of the Brazilian tropical rain forests and is widely appreciated for its honey. Stingless bees account for approximately 30% of all pollination of the Brazilian Caatinga and Pantanal ecosystems and up to 90% of the pollination for many species of the Brazilian Atlantic Forest and the Amazon. 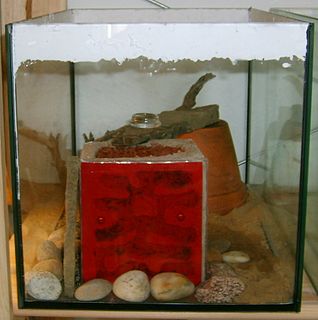 Ant-keeping is a hobby involving the capture, care, and observation of ants and ant colonies. It is a form of lay myrmecology.

The social network of colonies of social insects have been extensively studied as model biological networks.