Radio 4 were an American dance-punk band based in Brooklyn, New York. Formed in 1999, they claimed their music is "made in New York, is about New York, and sounds like New York".

The band was formed in 1999 as a trio, comprising Anthony Roman (vocals/bass), Tommy Williams (guitar/vocals) and Greg Collins (drums). The three had been friends growing up in Long Island, where they had been involved in the hardcore scene, [1] appearing in bands such as Garden Variety (Roman) and Sleepasaurus. [2] They initially formed the band under the influence of late 1970s/early 1980s punk and post-punk, recording a three-track EP which was released on New Jersey's Gern Blandsten label. [3]

Their first album The New Song & Dance was released in 2000, produced by Tim O'Heir. This record was a low-budget, gritty rock album with a slightly retro sound, drawing comparisons to The Clash in particular. [2] Around this time Anthony Roman opened a record store in Brooklyn which became a focus for the emerging scene, and the first album was followed by the Dance to the Underground EP, also produced by O'Heir. A dance remix of the title track became a club hit and was used in a Mitsubishi advert, indicating a new direction for the band's sound. [1]

The band subsequently became a five-piece, comprising Roman, Collins, David Milone (Vocals/Guitar) (who replaced original guitarist/singer Tommy Williams in 2005), Gerard Garone (Keyboards), and P.J. O'Connor (Percussion), [1] and teamed up with James Murphy and Tim Goldsworthy's DFA Productions to produce their second album. This collaboration signalled a new direction for the band, merging the guitar punk of their first album with electronic and dance music influences to create a dance-punk sound similar to other DFA-affiliated artists such as The Rapture. [3] Gotham! was released in 2002 on Gern Blandsten, described as "half dance party, half political rally", [4] leading the band to mainstream recognition and international success. [1] [3]

The band recorded their third album, Stealing of a Nation , in a basement studio in Brooklyn with Max Heyes, and it was released in September 2004, [3] to a poor critical reception. [5] A fourth album entitled Enemies Like This followed in 2006. [5]

Gerard Garone left the band in April 2008. They last appeared together as a full band at the CBGB Festival in New York in 2012. Roman and Milone still occasionally perform together as Orange Cassettes along with former members of Elefant. [6]

They cite a variety of influences, including Gang of Four, [1] Mission of Burma, Primal Scream and Zero Zero, though their lively punk sound combined with their militant political stance has drawn a strong comparison with The Clash. [1]

Their name comes from a Public Image Ltd. song from that group's second album, which is itself a reference to BBC Radio 4. [1]

Songs in other media

Theodore Francis Leo is an American singer, songwriter, and multi-instrumentalist. He is the frontman and lead guitarist of rock group Ted Leo and the Pharmacists, and in 2013, he and Aimee Mann formed the indie rock duo the Both.

The Little Killers were an American rock and roll band who formed in New York City, New York, U.S. in 2001. They played punky garage rock inspired by the likes of Chuck Berry, the New York Dolls, and Johnny Burnette's Rock & Roll Trio. 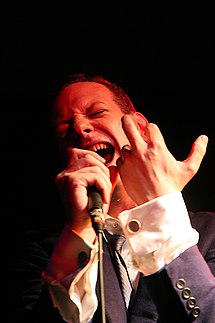 The World/Inferno Friendship Society is a band from Brooklyn, New York. Its style merges punk, soul, klezmer and jazz, while its collective membership features horns, piano and guitar and has a membership of about 40 players, of whom only about seven to ten active members usually perform at a time. The group is led by singer Jack Terricloth, who has been the only constant during the group's history. Terricloth is known for his pointed commentary during shows; his monologues have touched on politics and his transformation from the "old school".

Vice Squad are an English punk rock band formed in 1979 in Bristol. The band was formed from two other local punk bands, The Contingent and TV Brakes. The songwriter and vocalist Beki Bondage was a founding member of the band. Although there was a period of time when the band had a different vocalist she reformed the band in 1997.

Dance-punk is a post-punk genre that emerged in the late 1970s, and is closely associated with the post-disco and new wave movements. 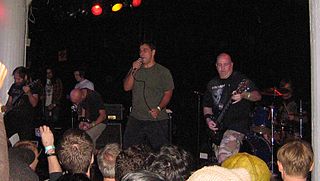 Rorschach is an American hardcore punk band from New Jersey that existed from 1989 to 1993 and again from 2009 to 2012. Their typical blend of hardcore with dissonant heavy metal elements provided an inspiration to many later hardcore and post-hardcore bands.

tej leo(?), Rx / pharmacists is the debut album by the Washington, D.C. rock band Ted Leo and the Pharmacists, released in 1999 by Gern Blandsten Records. Though considered the band's first album, it is actually a solo effort by Ted Leo with some contributions by Jodi V.B. of The Secret Stars. The following year Leo would assemble a backing band including V.B., which he named The Pharmacists. The album is largely experimental and blends rock music with elements of dub reggae, with many instrumental tracks, samples, and audio experimentation. This is exemplified in the various tracks entitled "(version:)," which are versions and remixes of "Release Form," a song originally written by V.B. for The Secret Stars. The track "(version: to decline to take a shower)," for example, consists of Leo singing the song while showering. In other instances Leo samples himself, such as "Walking Through," which contains a sample of "Congressional Dubcision," and "Out of Step '88!," which samples a radio interview that Leo did for campus radio station WFVI at the University of Notre Dame.

Chisel was a punk rock band from the United States that existed between 1990 and 1997. In that time, the group released two full-length albums and a compilation of early recordings.

Garden Variety was an American post-hardcore band active in the 1990s. During their time together, the band created two LPs and several 7" singles between 1991-1996. The band broke up in the mid-1990s, with the members joining other bands.

Weston is a punk rock band hailing from Bethlehem, Pennsylvania. Founded in 1990, they took their name from singer Dave Weston's family, since his parents allowed them to practice in their basement. The band never found mainstream success but their energetic and irreverent live shows earned them legendary status amongst their peers as well as their fans. Following their major label debut, the band split up. It was announced on October 17, 2006, that Weston would be reuniting for three shows in late December. This led to even more reunion shows in following years and a live album released December 2009.

Victory at Sea was an America indie rock band formed in 1996, from members of bands the Swirlies and Spore, in the Boston, Massachusetts region. It consisted of vocalist/guitarist Mona Elliott, bassist Mel Lederman and drummer Christina Files. Their most recent albums Memories Fade and All Your Things Are Gone were released by the independent record label Gern Blandsten Records in 2004 and 2006 respectively. On September 6, 2007 the band announced on their Myspace page that they had disbanded, though they stated that all of the members have new musical endeavors. Mona Elliott later played with former Metal Hearts member Anar Badalov as Travels, now disbanded. 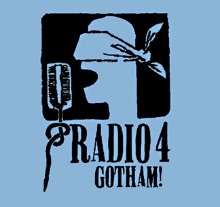 Gotham! is the second album by the dance-punk/post-punk revival band Radio 4 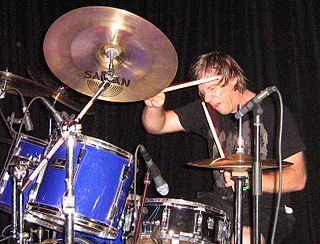 Andrew Gormley was the drummer for the band Rorschach (band), a hardcore band from New Jersey.

Pánico is a Chilean alternative rock, psychedelic rock and post-punk band based in Paris, France.

Kirstine Stubbe Teglbjærg is a Danish composer, writer, singer, arranger and producer. She is well known for having been the lead singer for Blue Foundation.