Mohammad Rafique Ali Sardar (born 16 April 1998) is an Indian professional footballer who plays as a goalkeeper for Mohammedan on loan from East Bengal.

Born in Kolkata, West Bengal, Sardar rose from poverty to joining the youth academies of the two Kolkata giants East Bengal and Mohun Bagan. [1] He soon then moved to the Tata Football Academy. [1]

Before the 2017–18 season, Sardar was announced as part of the inaugural Jamshedpur squad for the Indian Super League. [1] He made his professional debut for the club on 12 April 2018 in the Super Cup against Goa. He came on as a halftime substitute for Sairuat Kima after their #1 goalkeeper, Subrata Pal, was sent off. Jamshedpur went on to lose 1–5. [2] [3] A week later, on 20 April 2018, it was announced that Sardar signed a new contract with Jamshedpur, keeping him at the club till 2020. [4] 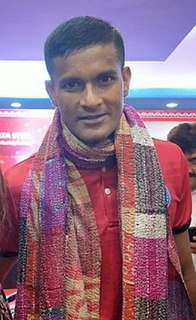 Subrata Pal is an Indian professional footballer who currently plays as a goalkeeper for SC East Bengal On loan from Hyderabad FC in the Indian Super League and the India national football team.

Ishfaq Ahmed is a former Indian footballer who currently works as the Interim head coach of Kerala Blasters FC in the Indian Super League. He is also a member of the AIFF technical committee. Ishfaq is one among the two professional footballers, along with Mehrajuddin Wadoo, to come from Jammu and Kashmir. He has represented the country and has played in the I-League and the Indian Super League for several clubs including Dempo, Mohun Bagan, Salgaocar, East Bengal, Mohammedan, Kerala Blasters, Pune F.C, and Mumbai F.C. He has also won the league title while also winning domestic cups such as the Federation Cup and Durand Cup.

Amrinder Ranjit Singh known as Amrinder Singh is an Indian footballer who plays as a goalkeeper for both Mumbai City and the Indian national team.

Sairuat Kima is an Indian professional footballer who plays as a defender for Bengaluru in the Indian Super League.

Jamshedpur Football Club is an Indian professional football club based in Jamshedpur, Jharkhand that competes in the Indian Super League, the top tier of Indian Football. The club is owned by Tata Steel, a subsidiary of the Tata Group.

The 2017–18 season was the first ever season of competitive football played by Jamshedpur. The team, along with Bengaluru, entered the Indian Super League as two new expansion teams. They played their first competitive match on 18 November 2017 while playing their last match of the season on 12 April 2018. The club ended their first Indian Super League campaign in fifth place, thus missing out on the chance to participate in the finals. Jamshedpur also participated in the Super Cup, being eliminated by Goa in the quarter-finals.

Manvir Singh is an Indian professional footballer who plays as a forward for ATK Mohun Bagan and the India national team.

The 2017–18 season was the club's fourth season since its establishment in 2014 and their fourth season in the Indian Super League.

The 2018–19 season will be the second season of competitive football played by Jamshedpur.

The 2019–20 season was the club's 100th season in existence. East Bengal FC formed in 1920, played its centenary season, competing in the I-League, Durand Cup and Calcutta Football League.

The 2019 Durand Cup was the 129th edition of the Durand Cup, oldest football tournament in Asia, since the tournament's founding in 1888. 16 teams competed in the tournament. The matches were played across three locations in West Bengal, namely Kolkata, Howrah and Kalyani from 2 August 2019. This was for the first time that the tournament played outside Delhi, its traditional venue. The final took place at the Salt Lake Stadium on 24 August 2019. 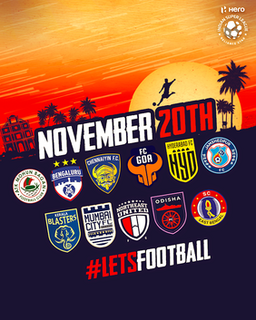 The 2020–21 season is the seventh professional season of Kerala Blasters in the Indian Super League, since their establishment in 2014. Due to COVID-19 pandemic, all the matches in the seventh season of ISL will be played behind closed doors in three venues at Goa, and GMC Athletic Stadium was chosen as the home venue for the Blasters.

The 2020–21 Hyderabad FC season is club's second competitive season since its inception in 2019.

The 2020–21 season is the 101st season of Sporting Club East Bengal. Established in 1920, the club completed its 100 years on 1 August 2020. Due to the COVID-19 pandemic, the Indian football season started on 1 August 2020 and is supposed to end on 31 May 2021. On 2 September 2020, East Bengal announced a partnership with Shree Cement as their principal investors. They would be competing in the Indian Super League.