A raven is any of several larger-bodied species of the genus Corvus . These species do not form a single taxonomic group within the genus. There is no consistent distinction between "crows" and "ravens", and these appellations have been assigned to different species chiefly on the basis of their size, crows generally being smaller than ravens.[ citation needed ]

The largest raven species are the common raven and the thick-billed raven.

The term "raven" originally referred to the common raven (Corvus corax), the type species of the genus Corvus, which has a larger distribution than any other species of Corvus, ranging over much of the Northern Hemisphere.

The modern English word raven has cognates in all other Germanic languages, including Old Norse (and subsequently modern Icelandic) hrafn [1] and Old High German (h)raban, [2] all of which descend from Proto-Germanic *hrabanaz. [3] 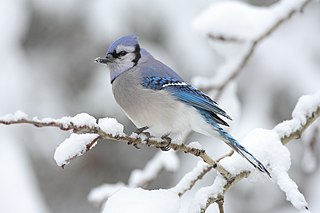 Corvidae is a cosmopolitan family of oscine passerine birds that contains the crows, ravens, rooks, jackdaws, jays, magpies, treepies, choughs, and nutcrackers. In common English, they are known as the crow family, or, more technically, corvids. Currently 133 species are included in this family. The genus Corvus, including the jackdaws, crows, rooks, and ravens, makes up over a third of the entire family. Corvids are the largest passerines. 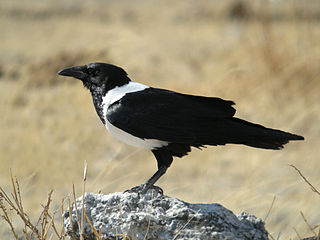 The pied crow is a widely distributed African bird species in the crow genus. 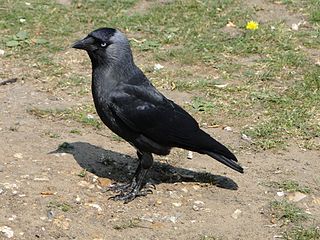 The western jackdaw, also known as the Eurasian jackdaw, the European jackdaw, or simply the jackdaw, is a passerine bird in the crow family. Found across Europe, western Asia and North Africa; it is mostly resident, although northern and eastern populations migrate south in the winter. Four subspecies are recognised, which differ mainly in the colouration of the plumage on the head and nape. Linnaeus first described it formally, giving it the name Corvus monedula. The common name derives from the word jack, denoting "small", and daw, a less common synonym for "jackdaw", and the native English name for the bird. 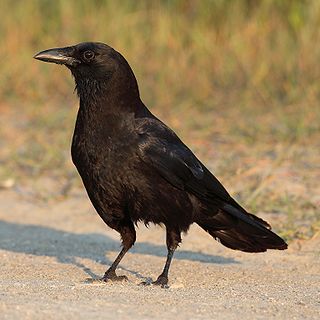 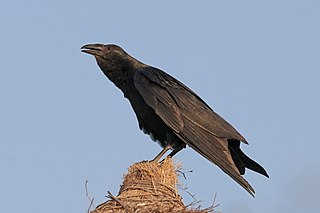 The fan-tailed raven is a passerine bird of the crow family native to Eastern Africa and the Arabian Peninsula.

The brown-necked raven is a larger bird than the carrion crow though not as large as the common raven. It has similar proportions to the common raven but the bill is not so large or deep and the wings tend to be a little more pointed in profile. The head and throat are a distinct brownish-black giving the bird its English name, while the rest of the plumage is black glossed with purple, blue or purplish-blue. Like the Common raven, Thick-billed raven and White-necked raven, it is one of the larger raven species. The smaller raven species are the Australian raven, Forest raven, Little raven, Fan-tailed raven and Chihuahuan raven with the Thick-billed raven being the world's largest raven species and the Chihuahuan raven being the smallest. The feathers of this species often fade quite quickly to a brownish black and the bird can look distinctly brown by the time it moults. The feet, legs and bill are black. The dwarf raven was formerly considered a subspecies but this bird now appears to be closer to the pied crow than this species. 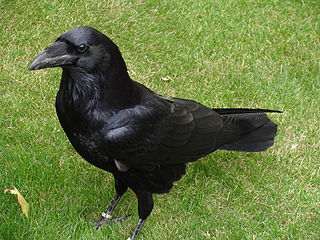 The common raven, also known as the western raven or northern raven when discussing the raven at the subspecies level, is a large all-black passerine bird. Found across the Northern Hemisphere, it is the most widely distributed of all corvids. There are at least eight subspecies with little variation in appearance, although recent research has demonstrated significant genetic differences among populations from various regions. It is one of the two largest corvids, alongside the thick-billed raven, and is possibly the heaviest passerine bird; at maturity, the common raven averages 63 centimetres in length and 1.2 kilograms in mass. Although their typical lifespan is considerably shorter, common ravens can live more than 23 years in the wild, which among passerines only is surpassed by a few Australian species such as the satin bowerbird and probably the lyrebirds. Young birds may travel in flocks but later mate for life, with each mated pair defending a territory. 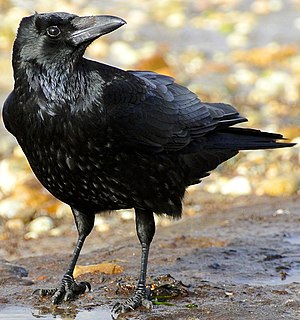 A crow is a bird of the genus Corvus, or more broadly a synonym for all of Corvus. The word "crow" is used as part of the common name of species including:

Corvus is a widely distributed genus of medium-sized to large birds in the family Corvidae. The genus includes species commonly known as crows, ravens and rooks; there is no consistent distinction between "crows" and "ravens", and these appellations have been assigned to different species chiefly on the basis of their size, crows generally being smaller than ravens. 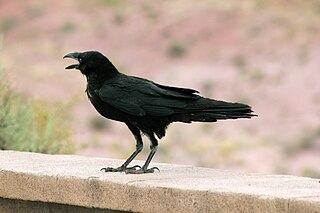 The Chihuahuan raven is a species of crow in the family Corvidae that is native to the United States and Mexico.

The Indian jungle crow is a species of crow found across the Indian Subcontinent south of the Himalayas. It is very common and readily distinguished from the house crow, which has a grey neck. In the past the species was treated as a subspecies of another crow species, but vocalizations and evidence from ectoparasite co-evolution and phylogenetic evidence have led to it being considered as a distinct species in modern taxonomic treatments. It differs in its voice from the large-billed crow found in the higher elevations of the Himalayas and the eastern jungle crow overlaps in the eastern part of its range. In appearance, it can be difficult to distinguish from either of these species although the plumage tends to be more uniformly glossed in purple and has a longer bill with a fine tip and a less arched culmen. The Himalayan species has a slightly wedge-shaped tail, unlike the rounded tail of the Indian jungle crow and tends to glide a lot.

Index of animals with the same common name
This page is an index of articles on animal species (or higher taxonomic groups) with the same common name (vernacular name). If an internal link led you here, you may wish to edit the linking article so that it links directly to the intended article.
This page is based on this Wikipedia article
Text is available under the CC BY-SA 4.0 license; additional terms may apply.
Images, videos and audio are available under their respective licenses.