The Regina Cyclone, or Regina tornado of 1912, was a tornado that devastated the city of Regina, Saskatchewan, Canada, on Sunday, June 30, 1912. It remains the deadliest tornado in Canadian history with a total of 28 fatalities. At about 4:50 p.m., green funnel clouds formed and touched down south of the city, tearing through the residential area between Wascana Lake and Victoria Avenue, and continuing through the downtown business district, rail yards, warehouse district, and northern residential area.

The tornado formed 18 kilometres (11 mi) south of the city and continued for another 12 kilometres (7.5 mi) north before dissipating. It was approximately 150 metres (490 ft) wide. [1] The tornado's wind velocity has been estimated at 400 kilometres per hour (250 mph), [2] though this conflicts with the F4 Fujita scale estimate based on reports of damage and historical photographs. [3]

The tornado hit Regina at approximately 5:00 p.m. on June 30, 1912. The tornado formed 18 km south of the city and was roughly 150 metres wide by the time it reached Regina. The worst damage was in the residential area north of Wascana Lake and the central business district. Many buildings, both brick and wood, were entirely destroyed. "The new Central Library building was opened May 11, 1912, and just six weeks later, the new library was among the many buildings that suffered damage." [4]

"In just twenty minutes it completely leveled a number of houses, and caused other houses to explode as the pressure inside the structures rose when the tornado passed overhead." [5] The affluent residential area to the south was substantially diminished, but the tornado left houses untouched here and there immediately adjacent to houses which were flattened. "[I]n the warehouse district, it destroyed many of the storage buildings. The CPR Roundhouse was stripped to the rafters, and boxcars were pulled from the tracks and hurtled into the air." [6]

Such damage was especially appalling to see as well as experience since Regina had been built on an entirely featureless plain, lacking any trees or vegetation other than natural wild prairie grass and without any hills or rivers apart from the tiny spring runoff Wascana Creek, which only flowed in early spring.

"The cyclone claimed twenty-eight lives and was the worst in Canadian history in terms of deaths. It also rendered 2,500 persons temporarily homeless, and caused over $1,200,000 in property damage. It took the city two years to repair the damage and ten years to pay off its storm debt." [5]

The city forced those rendered homeless by the disaster to pay for the nightly use of cots set up in schools and city parks. It also required homeowners to pay for the removal of rubble from their homes. [7] Debris was cleaned up quickly. "The storm damaged the Metropolitan Methodist Church, [the Knox Presbyterian Church, the First Methodist,] the library, the YWCA [and YMCA], and numerous other downtown buildings; in the warehouse district, it destroyed many of the storage buildings. The CPR Roundhouse was stripped to the rafters, and boxcars were pulled from the tracks and hurtled into the air." [5]

Damage from the tornado is estimated to be F4 on the Fujita scale. The tornado killed 28 people, injured hundreds, and left 2,500 people homeless, out of a population of about 30,213 (in 1911). Around 500 buildings were destroyed or damaged. Property damage was quantified at $1.2 million CAD, [8] and it would be forty years before the $4.5 million CAD private and public debt incurred to rebuild and repair was repaid. [9]

English actor William Henry Pratt, better known by his stage name "Boris Karloff", was in Regina at the time of the tornado as a member of the Jeanne Russell Players, a struggling company of actors and singers. Theatre reviews appearing in at least four Western Canadian newspapers in 1912 prove he had already started using the stage name "Boris Karloff" by this time. [10] The Jeanne Russell Players disbanded in Regina a day before the tornado struck, leaving Karloff stranded and broke. [11] Following the tornado, he worked clearing debris for twenty cents an hour and was later employed in Regina by the Dominion Express Company. He remained in Regina until October 1912 when he joined the Harry St. Clair Players in Prince Albert. In 1958, Karloff appeared on the talk and game show Front Page Challenge [12] where he was featured not because of his fame as a Hollywood actor, but because of his association with the Regina Cyclone of 1912. [13]

American stage actress Henrietta Crosman, who also later went on to Hollywood, was also in Regina at the time of the disaster and toured the devastation with members of her troupe. [14] Her company staged a benefit performance of Catherine Chisholm Cushing's comedy "The Real Thing" at the Regina Theatre (12th Avenue and Hamilton Street, previously on the site of the old Hudson's Bay department store, opened in 1910) on July 4, 1912, with a portion of the proceeds going to the tornado relief fund. [15]

Over the years, some historians have mistakenly placed Karloff as a member of Crosman's company or as a member of the vaudevillian Albini-Avolos Company, which was a third theatrical troupe in Regina at the time of the 1912 tornado. The Albini-Avolos staged benefit performances for the tornado victims at the Regina Theatre on July 1 and 2. [16]

Boris Karloff, Jeanne Russell, Henrietta Crosman, and the Albini-Avolos are all characters in BD Miller's musical drama, "Swept Off Our Feet: Boris Karloff and the Regina Cyclone", which commemorated the 100th anniversary of the disaster and premièred as a July 2012 production of Regina Summer Stage. [17]

The novel Euphoria by Connie Gault won the 2009 Saskatchewan Book Award for Fiction and prominently features the Regina Cyclone.

Regina is the capital city of the Canadian province of Saskatchewan. The city is the second-largest in the province, after Saskatoon and is a commercial centre for southern Saskatchewan. As of the 2016 census, Regina had a city population of 215,106, and a Metropolitan Area population of 236,481. Statistics Canada has estimated the CMA's population to be 261,684 as of 2019. It is governed by Regina City Council. The city is surrounded by the Rural Municipality of Sherwood No. 159.

The Rural Municipality of Sherwood No. 159 is a rural municipality (RM) in the Canadian province of Saskatchewan within Census Division No. 6 and SARM Division No. 2. Located in the south-central portion of the province, it surrounds the City of Regina, the provincial capital, and forms part of the Regina census metropolitan area. 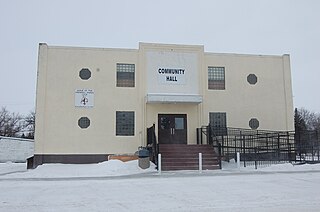 The Diocese of Qu'Appelle in the Anglican Church of Canada lies in the southern third of the civil province of Saskatchewan and contains within its geographical boundaries some 50% of the province's population of one million.

Wascana Centre is a 930-hectare urban park built around Wascana Lake in Regina, Saskatchewan, Canada, established in 1912 with a design from renowned architect Thomas Mawson. The park is designed around the Saskatchewan Legislative Building and Wascana Lake. High-profile features include the University of Regina, Royal Saskatchewan Museum, Conexus Arts Centre, Saskatchewan Science Centre, and CBC Regional Broadcast Centre. Wascana Centre brings together lands and buildings owned by the City of Regina, University of Regina, and Province of Saskatchewan. The park is located immediately south of the city's downtown core, bordered by residential areas on the east, south and west, and on the south-east edge it spills out onto open Saskatchewan prairie along Wascana Creek. 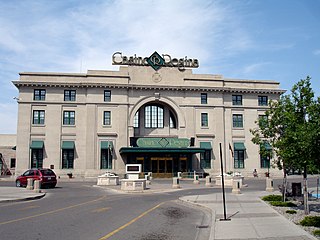 Casino Regina is a casino located on Saskatchewan Drive — — in Regina, Saskatchewan, Canada. It operates in the city's former union station, a Tyndall and ashlar stone structure completed in 1912. The casino is owned and operated by Sask Gaming.

The Conexus Arts Centre, known from 1970 till 2006 as the Saskatchewan Centre of the Arts, is a theatre complex located within Wascana Centre in Regina, Saskatchewan, which largely replaces former theatres downtown and Darke Hall on the original campus of Regina College, also in Wascana Centre but north of Wascana Lake. Naming of the Venue as Conexus Arts Centre was possible through a Partner/Sponsor Agreement with the Conexus Credit Union.

Many historically significant buildings in Regina, Saskatchewan were lost during the period 1945 through approximately 1970 when the urge to "modernize" overtook developers' and city planners' sense of history and heritage. The old warehouse district to the north of the old CPR tracks was Regina's original commercial raison d'être once Lieutenant-Governor Edgar Dewdney had established the site of his considerable landholdings as the Territorial Capital. With the significant conversion of shipping of commercial goods from train to truck and cancellation of passenger service on the railway, the Warehouse District immediately adjacent to the train line has ceased to be exclusively industrial in character. Some areas of the Warehouse District have been transformed into a shopping, entertainment and residential precinct. 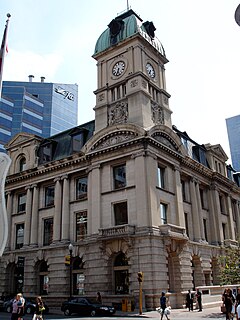 The Prince Edward Building is the current official name of the historic post office building in Regina, Saskatchewan, located at the corner of Scarth Street and 11th Avenue. The site had been occupied by the original Knox Presbyterian Church from 1885 until the land was sold to the government in 1905. The church moved to a new building on the corner of 12th Avenue and Lorne Street.

Seven neighbourhoods are of considerable note:

Wascana Creek is a stream in the Canadian province of Saskatchewan. Originating in the fields east of Regina near Vibank, it travels southeast for approximately 45 kilometers before turning back west at Tyvan. The creek then travels in a northwestwardly direction through Regina, where it was dammed by the Canadian Pacific Railway to create Wascana Lake, both to supply water for steam locomotives and to create a decorative image in Regina. Below the lake, the creek leaves Regina and ends at the Qu'Appelle River in Lumsden. The creek and its tributaries drain over 2,200 square kilometres.

The timeline of Regina history shows the significant events in the history of Regina, Saskatchewan, Canada. 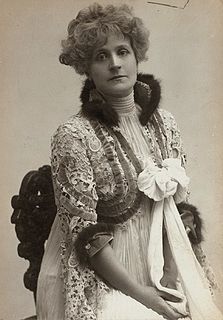 David Webster (1885–1952) was a Scottish-Canadian architect best known for his designs of elementary schools in Saskatoon, Saskatchewan, Canada. His school designs were often in a Collegiate Gothic style emphasizing a central tower, locally referred to as a "castle style". Along with other local architects of his era, such as Walter LaChance and Storey and Van Egmond, Webster prospered during the province’s 1912 economic boom which sparked a frenzy of new construction. 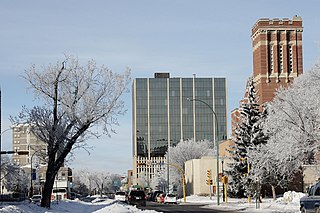 Knox-Metropolitan United Church stands on Lorne Street at Victoria Avenue across from Victoria Park in downtown Regina, Saskatchewan, Canada. It is the current manifestation of Presbyterian and Methodist congregations that date back to "worship services in both traditions…in 1882."