Rob Grange (born 1950 in Flint, Michigan, United States), is an American rock bass guitarist, best known for his work with Ted Nugent and his unique phase bass lines in the song "Stranglehold". [1] [2]

Grange was a member of Sonny Hugg, a Michigan early progressive rock group that released one single in 1970 on Silo Records in Lansing, MI. It was a cover tune titled "Daybreak" and was written by Richard Zehringer later known as Rick Derringer of The McCoys. Sonny Hugg was composed of Craig Marsden on lead vocals and guitar, Barry Best on keys and vocals, Rob Ross on drums, and Grange on bass. [3]

In 1973, the band recorded an album titled Call of the Wild with the help of session men Andy Jezowski (vocals) and Gabriel "Gabe" Magno (organ Hammond B-3, piano, synthesizer, flute). Magno also went on the road with the band, but after a few gigs, they decided to drop having a live keyboard player and went back to a three piece line up. [4]

In 1974, the band released the album Tooth Fang & Claw , and soon after Mastrianni left the band and was replaced by Derek St. Holmes (vocals, rhythm guitar) and Brian Staffeld (drums). At this point Nugent dropped The Amboy Dukes name and the band became The Ted Nugent Band. They were definitely a "band" and all of them wanted that and discussed it. None of them considered themselves as "back-up players." One of the conditions of St. Holmes joining them, was it was called a "band". So, they toured as The Ted Nugent Band and, in 1975, after replacing Staffeld with Cliff Davies on vocals and drums, they went into the studio to do their first album, which at the time was unnamed, for Epic Records.

At this point, David Krebs of Leber & Krebs Management, who also managed Aerosmith, convinced Nugent to drop the "band" and just call it "Ted Nugent". This was a total surprise to the "band" and it was the beginning of the end. The nucleus of Rob Grange, Derek St. Holmes, and Cliff Davies for songwriting, as well as arranging, was forever broken. The make up of the original members was really as a "band". In 1978, three years later and with four platinum albums titled Ted Nugent , Free-for-All , Cat Scratch Fever and Double Live Gonzo! , Grange and St. Holmes moved on to form a new rock band, St. Paradise, because Nugent did not want a "band concept". In Martin Popoff's book, "Epic Ted Nugent", Nugent admits that the song "Stranglehold", was co-written by Grange, yet he never received a share for co-writer. [1] [2] Their last concert together, as the original line up, was Cal Jam 2 on March 18, 1978. [5]

Grange and St. Holmes moved forward with a new band called St. Paradise featuring Denny Carmassi of Montrose on drums and John Corey later of the 1994 reunion of The Eagles on keyboards. They released one eponymous album for Warner Bros. in 1979, before splitting up. The LP album BSK 3281 contained the following nine tracks: [6]

Grange, St. Holmes and Nugent were reunited on stage after more than 30 years at the festival and played "Just What The Doctor Ordered" from their first album Ted Nugent and the classic Chuck Berry tune "Johnny B Goode" featuring blues guitar legend Bugs Henderson. [7] [8]

In the summer of 2020 Rob Grange and Danny Gore produced and released a new project called GRANGE, due to the name dukEX being used by so many other people on YouTube.

Grange plays early Fender basses, circa '56–'62. In 1973 he was the first documented bassist to modify his '62 Fender Precision bass by adding a Pre-CBS Fender Jazz pickup, a configuration later to be known as a "P/J" bass. This resulted in adding highs to the tone. He took this a step further and added a toggle switch and an "out of phase" switch. This bass became known as the "Stranglehold Bass". It wasn't until the 80s that Fender picked up on this popular trend and produced their first Fender P/J basses.

His favorite live bass was a vintage '56 Fender P-Bass. Grange also obtained a Sunn Amp from John Paul Jones of Led Zeppelin, which he used in his live concert rig. He used an 8-String Hagstrom Bass on "Snakeskin Cowboys". Grange wrote the main phase bass for Stranglehold and used an early MXR "Script" Phase 90 and an Ampeg B-18 in the studio. Grange also plays a Sadowsky Metro P/J, black finish with a maple neck. [10]

“Ted Nugent's old bass player, named Rob Grange was one of my very favorite bass players." “And he's still a hero to me." Jason Newsted of Metallica in an interview on "That Metal Show" [2]

“Rob Grange, one of the greatest bass players in rock." Derek St. Holmes [2]

"Ted kept Rob Grange so long into the '70s, because Rob played like Greg Arama, the original bass player for the Amboy Dukes, and Ted loved that about Rob. Rob was a really great guy and very dedicated, and he was very dependable." KJ Knight [2]

“I grew up watching the original Ted Nugent Band, it was great to see Rob Grange, Derek St. Holmes and Ted back together at the 2010 Dallas Guitar Show". Andy Timmons [2]

Cat Scratch Fever is the third studio album by American hard rock musician Ted Nugent. The album was released on May 13, 1977, by Epic Records. Vocalist Derek St. Holmes, who had left the band during the recording of the album Free-for-All, had come back for touring in 1976 and was again the principal lead singer on this album. 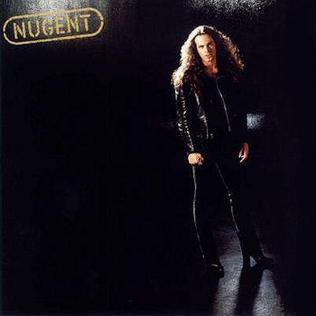 Spirit of the Wild is the eleventh studio album by American hard rock musician Ted Nugent. The album was released in May 1995, by Atlantic Records. The album was produced by Michael Lutz for M.E. Productions and Ted Nugent, and engineered by Jim Vitti and Lutz.

Theodore Anthony Nugent is an American singer-songwriter, guitarist, and conservative political activist. Nugent initially gained fame as the lead guitarist of The Amboy Dukes, a band formed in 1963 that played psychedelic rock and hard rock. After dissolving the Amboy Dukes, he embarked on a solo career. Nugent is known for his Gibson Byrdland, his bluesy and frenzied guitar playing and his energetic live shows. Despite possessing a distinctive, wide ranging singing voice, Nugent recorded and toured with other singers during much of his early solo career, including Derek St. Holmes, Brian Howe, and Meat Loaf.. In the late 80s and early 90s he was part of the supergroup Damn Yankees.

Survival of the Fittest Live is the fifth album by The Amboy Dukes. Released in 1971, it was the band's second album on Polydor Records, and the first where the band was credited as "Ted Nugent and the Amboy Dukes". It was the second Polydor album to chart, and it peaked at #129. There were no accompanying singles released by the record company. The performance was recorded live at the Eastown Theater in Detroit, Michigan, on July 31 and August 1, 1970. Keyboardist Andy Solomon again contributed most of the vocals.