Robert J. Woodhead is an entrepreneur, software engineer and former game programmer. He claims that a common thread in his career is "doing weird things with computers".

In 1979 he co-founded Sirotech (later known as Sir-Tech) with Norman Sirotek and Robert Sirotek. Along with Andrew C. Greenberg, he created the Apple II game Wizardry: Proving Grounds of the Mad Overlord , one of the first role-playing video games written for a personal computer, as well as several of its sequels. [2] [3] [4] Woodhead designed the 1982 Apple II arcade game Star Maze , which was programmed by Gordon Eastman and sold through Sir-Tech. [5] He told TODAY magazine in 1983, "I have loads of arcade game ideas, but lack the patience to do the actual coding. I'm sort of a big project person; I like the challenge of a program like Wizardry." [5]

Later, he authored Interferon and Virex, [6] two of the earliest anti-virus applications for the Macintosh, and co-founded AnimEigo, one of the first US anime releasing companies. As a result of this venture, while living in Japan, he married his translator and interpreter, Natsumi Ueki, together with whom he has two children. [7] He also runs a search engine promotion website called SelfPromotion.com.

As a hobby, he builds combat robots, and his children, James Ueki and Alex Ueki, are the 2004 and 2005 Robot Fighting League National Champions in the 30 lb Featherweight class.

Woodhead made a cameo appearance in the 1982 video game Ultima II as an NPC; when the player talked to him he would scream "Copy Protect!", a sarcastic reference to the extensive copy protection methods used in video games of the time. He also has a screen credit in the film Real Genius as their "Hacking Consultant".

Woodhead has also served on the Eve Online Council of Stellar Management with an in-game avatar name of Trebor Daehdoow. He was re-elected for 4 terms, serving in his last term as Chairman.

Bubblegum Crisis is a 1987 to 1991 cyberpunk original video animation (OVA) series produced by Youmex and animated by AIC and Artmic. The series was planned to run for 13 episodes, but was cut short to just 8.

Wizardry is a series of role-playing video games, developed by Sir-Tech, that were highly influential in the evolution of modern role-playing video games. The original Wizardry was a significant influence on early console role-playing games such as Final Fantasy and Dragon Quest. Originally made for the Apple II, the games were later ported to other platforms. The last game in the original series by Sir-Tech was Wizardry 8, released in 2001. There have since been various spin-off titles released only in Japan.

Wizardry II: The Knight of Diamonds is the second game in the Wizardry series of role-playing video games. It was published in 1982 by Sir-Tech.

Sir-Tech Software, Inc. was a video game developer and publisher based in the United States and Canada. 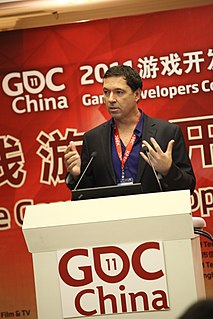 Andrew Clifford Greenberg co-created Wizardry with Robert Woodhead, which was one of the first role-playing video games for a personal computer. He was also involved with the production of the game Q-Bert and several of the later Wizardry games in the 1980s. He is a graduate of Cornell University, where he did his first work on role-playing video games. He also is a proficient tuba player.

AnimEigo is an American entertainment company that licenses and distributes anime, samurai films and Japanese cinema. Founded in 1988 by Robert Woodhead and Roe R. Adams III, the company was one of the first in North America dedicated to licensing anime and helped give anime a noticeable following in the region. Over its history, the company has released many anime titles, such as Urusei Yatsura, Vampire Princess Miyu, Otaku no Video, the original Bubblegum Crisis OVA series, and Kimagure Orange Road.

David John Braben is a British video game developer and designer, founder and CEO of Frontier Developments, co-creator of the Elite series of space trading video games, first published in 1984. He is also a co-founder of and works as a trustee for the Raspberry Pi Foundation which in 2012 launched a low-cost computer for education.

David W. Bradley is a video game designer and programmer, most notable for the role-playing video games Wizardry V, VI, and VII.

Wizardry: Proving Grounds of the Mad Overlord is the first game in the Wizardry series of role-playing video games. It was developed by Andrew Greenberg and Robert Woodhead. In 1980, Norman Sirotek formed Sir-Tech Software, Inc. and launched a beta version of the product at the 1980 Boston Computer Convention. The final version of the game was released in 1981.

Wings is a World War I video game developed and published by Cinemaware. It was released for the Amiga in 1990. The action sequences are similar in style to those of the 1927 silent film Wings. 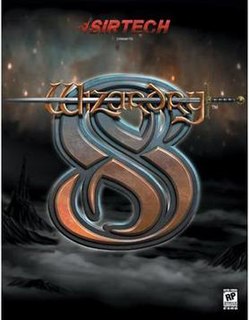 Wizardry 8 is the eighth and final title in the Wizardry series of role-playing video games by Sir-Tech Canada. It is the third in the Dark Savant trilogy, which includes Wizardry VI: Bane of the Cosmic Forge and Wizardry VII: Crusaders of the Dark Savant. It was published in 2001 by Sir-Tech, and re-released by Night Dive Studios on GOG.com and Steam in 2013. 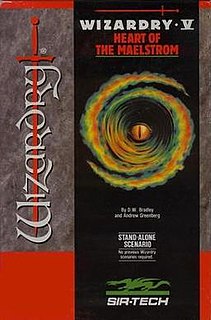 Wizardry V: Heart of the Maelstrom is the fifth scenario in the Wizardry series of role-playing video games. It was published in 1988 by Sir-Tech for the Commodore 64, Apple II, and IBM PC compatibles. A port for the SNES and FM Towns was later developed and published by ASCII Entertainment in Japan. Wizardry V was released in the US for the Super Nintendo Entertainment System by Capcom in 1993, and subsequently re-released for the Satellaview subsystem under the name BS Wizardry 5.

Wizardry IV: The Return of Werdna is the fourth scenario in the Wizardry series of role-playing video games. It was published in 1987 by Sir-Tech Software, Inc. 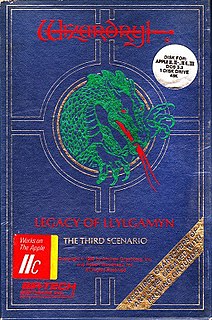 Wizardry III: Legacy of Llylgamyn is the third scenario in the Wizardry series of role-playing video games. It was published in 1983 by Sir-Tech. 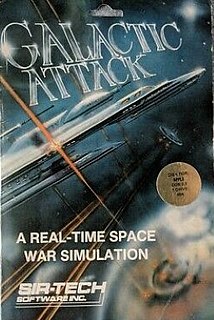 Galactic Attack is a 1980 space combat simulator video game written by Robert Woodhead for the Apple II and published by the company he co-founded, Siro-Tech. It is a single-player adaptation of the game Empire from the PLATO mainframe network.

Game Studio Corporation Ltd. (株式会社ゲームスタジオ) is a video game production company headquartered in Shinagawa, Tokyo, Japan. It was founded on August 14, 1985 by former Namco employee Masanobu Endō, who continued to develop projects for Namco through his company. The company later made a subsidiary company called Mobile & Game Studio, while the goodwill was transferred. 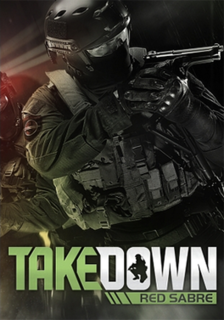 Takedown: Red Sabre is a tactical shooter video game developed by Serellan and published by 505 Games for Microsoft Windows and Xbox 360. It was released on September 20, 2013 for Windows via Steam and on February 21, 2014 for Xbox 360 via Xbox Live Arcade. 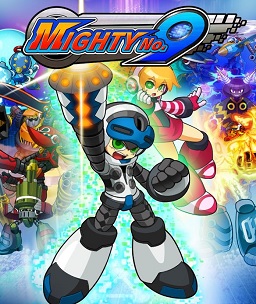 Mighty No. 9 is a 2016 action platform video game developed by Comcept and published by Deep Silver. The game was crowdfunded through Kickstarter and incorporated heavy input from the public. Mighty No. 9 closely resembles the early Mega Man series in both gameplay and character design, which project lead Keiji Inafune worked on, and is considered a spiritual successor. 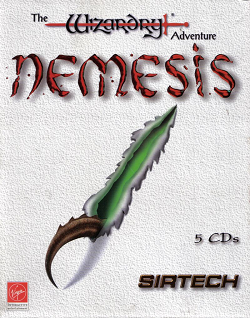 Nemesis: The Wizardry Adventure is a 1996 adventure and role-playing video game developed and published by Sir-Tech. It is a spin-off of the Wizardry series of games. Ports for Sega Saturn and Microsoft Windows were released in Japan in 1998.